So, I know I promised you guys something interesting this week, but it seems life doesn’t exactly want me sharing this game with you guys. Between not being able to play the game (arcades in WV are very hard to come by, but I couldn’t even find a ROM of this one, which really threw a wrench into my plans), or really even find any media on it, and more serious stuff like my dad’s surgery, it looked like there would’ve been a good chance for this article NOT to come out.

But I will soldier on, for you, my loyal readership! (all two of you!) So without further adieu, the potentially biggest resource on this game on the entire internet! 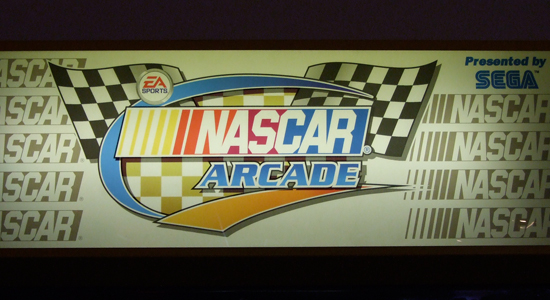 How rare is decent media for this game? So rare that this is the only decent logo shot I could find. (Photo by morgan71 on Flickr)

The first ever NASCAR coin-op machine, NASCAR Arcade was released in 2000 by EA and Sega Rosso/AM-3. Based on the 1999 NASCAR Cup season, it was pretty much meant to be a simmier Daytona USA with an official NASCAR license.

For the most part, it follows the Daytona USA formula pretty closely, featuring three tracks of varying difficulty (Talladega for Easy, which is highly ironic considering most drivers find it to be the most challenging track in the series, Richmond for Intermediate, and Watkins Glen for Hard), gear selections, and other gameplay elements, with little tweaks like target position bonuses thrown in to spice things up a bit. However, the car selection is increased dramatically, from just four cars in Daytona USA 2, to over 30 of NASCAR’s best (and Chad Little). 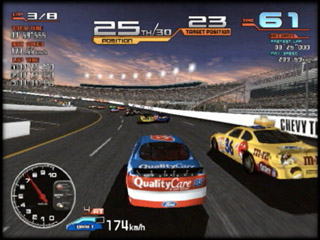 Miss these cars so much.

Graphically, it looked better than any other NASCAR game available at the time. Gone were the overly pixelated messes of previous NASCAR games, instead having incredibly detailed machines. From the giant Home Depot logo on the hood Tony Stewart’s car, to the tiny Union 76 logo on the fender of Ken Schrader’s, everything was there and clear as clear could be. What a jump in 2-3 years, right? The tracks looked damn good as well, with several little details, like the cracks in Talladega’s track surface, or the numerous logos on the walls of Richmond, included for the first time. Special mention also has to go to the game’s intro, which I’ll be posting a little later in the article.

From my experiences with the game, as long as nothing was wrong with the cabinet, the game played quite well. It had the usual “finish in the top three before time runs out” theme of most arcade racers, but instead of the AI drivers just rolling over for you and letting you go, it was a battle no matter if you were first or 21st. If I’m being perfectly honest, it’s the hardest coin-op racer I’ve ever played. 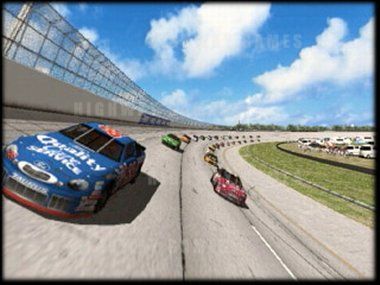 In before a Ricky Bobby reference.

As for my thoughts on it today, while I’ve only played it once in the last couple years (this past August in SC), I feel it still holds up really well. Still incredibly challenging for me. It’s still several times better than the last couple EA NASCAR titles, despite predating them by nearly a decade. I’ll go so far as to say it even looks better than those games as well, despite being a 1999 arcade game, and those being on the PS3 and 360, due to the unrealistic nature of EA’s car models in the newer games.

And as for a legacy… Well, in terms of NASCAR games, I already talked about that in the previous article, and aside from being one of the first (if not the very first) games to feature current NASCAR megastar Dale Earnhardt Jr., it doesn’t really add a whole lot to that.

But in terms of Sega’s legacy, it had a lasting effect on its most famous series. Take a look at this video, and listen closely to the music that plays. Recognize that wailing guitar? Or the singer’s voice? If you’ve played nearly any 3D Sonic game, you should. It’s a little group called “Sons of Angels”, but you know em better as Crush 40.

While their first released song together was in Sonic Adventure, working on the music for this game was the first project Jun Senoue and Johnny Gioeli worked on, forming a partnership that still lasts today. So whenever you hear “Live and Learn” or “Open Your Heart” and think about how good they are, just remember you have this game to thank for that. 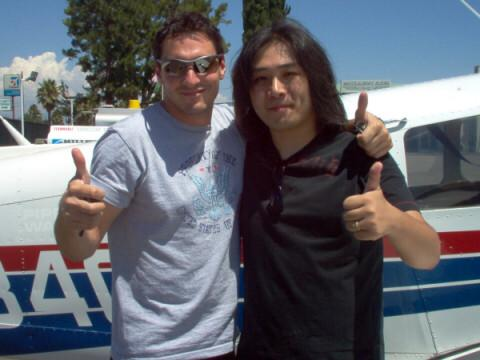 Jun and Johnny approve this MegaDriving.

And another edition down. Kind of a nice way to tie the start of the NASCAR Chase for the Cup and the re-release of Sonic Adventure together, me thinks. I do apologize for the lack of information here. I really thought this game would have more about it on the internet, but alas, it didn’t.

Anyways, if you’ve got any questions or feedback or requests, just leave a comment here, or hit up the official forum thread. Hope you all enjoyed. See ya next week.