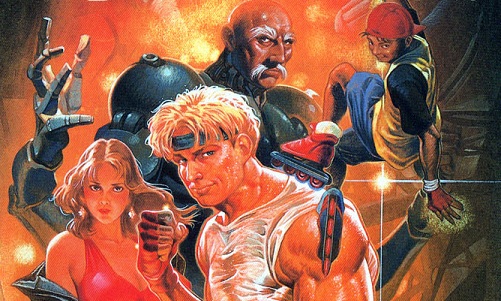 Streets of Rage or Bare Knuckle? Which is the better name I wonder? Both sound so manly. So dangerous…

Luckily when they localised the third game for the western market, they made enough changes to at least in this instance affirm my preference on a much less shallow basis. Strangely, the first two games were mostly untouched when they were localised, except minor censorship issues like cigar smoking and upskirt shots. However there were significant changes to Bare Knuckle III‘s game mechanics, enough to make it interesting as a review in itself, although I’ll obviously be judging it against the western SoR as well as the previous games too. This is only possible through the translation patch hosted on RPGClassics, so if you were curious about trying it out yourself, the patch (and the patch ONLY) is available on the website. Many thanks to their efforts.

The plot, instead of the bizarre thread through Streets of Rage 3 of replacing city officials with robot duplicates, follows the discovery of the dangerous element ‘Rakushin’, which has caused an incorrigible disaster. Amongst this, a military general called Ivan Petrov has also gone missing, so it’s up to the regular team along with Dr. Zan (A researcher from the criminal syndicate who replaces Max as the only new main character. Thankfully, he’s a badass cyborg), to stop another disaster from happening and find the missing general. Fans of the western version will understand that Petrov was actually replaced by the Chief of Police in the rescue stage late in the game, which at least goes some way to explaining the weirdness of that scenario.

The entire structure of the game is the same as previous titles, pick one of four characters to fight as and progress from one seemingly unrelated area to another, although BKIII goes some way to explaining this with between-level cut scenes that explain the evidence trail leading them to the various locale. Skate (or Sammy this time around) even gets angry with Dr.Zan at one point because they keep having the fight through disconnected locations that have nothing they were looking for at the end of them, and the plot maintains this intrigue somewhat competently. The story is a welcome addition to the game, or rather the westernised story is entirely unnecessary and only serves to confuse gamers about their motivation, but at the same time it doesn’t really elevate the game above any of the previous in the series. Nor can it really compete with other games in the genre, although for the time it would’ve been interesting for the more mature story to have been allowed to remain, especially the final climax with Mr. X as element Rakushin really ups the stakes of that entire confrontation.

I can understand why the story was changed though, as the majority of the game is probably too absurd to support a believable and well constructed plot. The series has always had some strange moments, not forgetting the time you fight an alien in SoR 2, or when you were able to call a police car for artillery support while you were riding on a boat in the middle of a river during SoR 1, but both versions of this game really turn the dial up on all things crazy. Just with the bosses alone you’ll fight a bulldozer trying to crush you, a robot replica of Axel, a Kangaroo and his clown master, twin girls that fire green energy bolts at your from their bare hands, a robot replica of Mr.X AND Mr.X’s brain in a jar controlling a robot servant. Not to mention the rocketeer and… well… this guy. 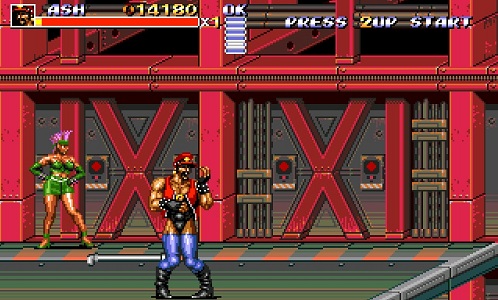 The famously removed Ash (replaced in the US/PAL version by Shiva, missing out an entire boss fight), who doubles as a playable character. Having only a few attacks, he somehow ended up with the strongest combo attack in the entire game although he is lacking any other offensive capabilities, besides being just generally offensive. We’ll get to him in a moment, but certainly this is easily the weirdest game of the lot, and a lot of people didn’t really appreciate the shift in tone of the game, myself included. I loved some of the earlier boss designs, Bourbon the Bartender especially, and to see them replaced with robots and clowns was rather disappointing, not to mention the majority of boss sprites in this game are similar in size to the main characters, which was a weird change. The earlier games had bosses clearly larger and out of proportion to the regular characters, but their grounded designs allowed them to look incredibly strong but realistic despite their grandiose nature. It’s definitely one of the weakest aspects of the game, but at least it was something new.

I definitely prefer the combat of this game over the earlier ones however, as it delivers everything that was great before and then builds on it even further. You still have the combo and HP-reducing blitz attacks from before, along with dash attacks unique to each character. Besides that, each character also has strengths with different weapons, for instance Axel can use a unique dash attack with the baseball bat that another character may not (Zan instead turns weapons into energy to fuel his own special weapon). This really spices up the formula, and there’s a neat strategy in leaving weapons for the other player if they have more uses for them. Also the blitz attacks are now linked to a power meter, so whenever you use a special it wont actually deplete your health if the blue bar next to your health is filled, which means you’re unleashing your strongest attacks whenever you want them, rather than waiting until you needed them.

Even more impressive than that is the power-up feature, where if you score a certain number of points, you actually upgrade your dash attack into stronger forms of itself or entirely new attacks. Axel for instance gets a longer range uppercut, and then some kind of spinning attack before finally a spin attack that launches into an uppercut. It sounds exciting, but unfortunately the western version of the game is so stupidly hard in fact, that you simply wont be able to hold onto a continue long enough to earn the special attacks. This was such a problem that myself and many other had absolutely no idea this was even in the game because we couldn’t live long enough to reach them, only finding out about it through the translation years later 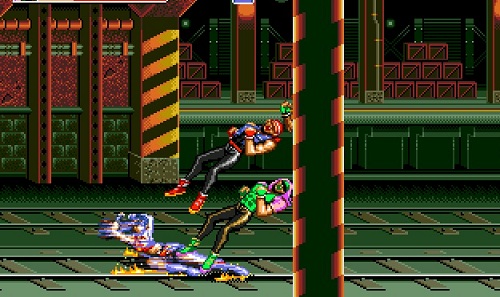 The problem lies in how the difficulties are determined mechanically, as in BKIII it has absolutely no change on the damage output. In SoR 3 enemy attack strength is increased from easy to normal to hard, which means the enemies you face in normal mode (a pre-requisite if you want to avoid BAD END) do far more damage to you than they are supposed on BKIII’s Very Hard mode. The problem then becomes quite apparent, as every time you use a continue you lose your entire highscore. In fact the best way to play BKIII is to one credit it, so that you keep collecting more extra lives and more importantly points in order to grow more powerful.

Ultimately that’s probably the biggest improvement going from SoR 3 to BKIII. The fighting just feels a lot more fun because you and a friend are really beating your way through hordes of bad guys. You’re nowhere near as worried about getting damaged because the damage they do to you is minimal for the most part, and you actually want the points for beating them up to earn new moves, which in turn makes it easier to beat them up, especially if the new move is designed to take on groups in a single attack. Both versions also contain a wealth of extras, like a slightly iffy versus mode, super powered versions of Skate (DRILL FINGER!) and Axel, three unlockable characters as Shiva, Roo and Ash and four different endings, culminating in an entirely different final stage depending on if you found the Chief of Police/General. Technically that leads you to a bad ending, but having a final battle with Shiva in the White House is pretty much worth losing for.

There’s plenty here whatever version you’re playing, but due to the major gameplay grievances BKIII is definitely the way to go. That said I don’t really disagree with a lot of the censorship choices. I prefer the western designs for Elektra and some of the other female characters, if nothing else but the idea that Donovan is even more awkward for being the most naked enemy in the game, and Ash is just.. how in the hell did that end up in there? I literally sat in disbelief when I played him for the first time. He can’t even pick up weapons. He tries and they just flop out of his hands. If you try to throw an enemy, he sheepishly giggles instead. It’s ridiculous. I mean as a piece of gaming history, I’m so glad that such a thing exists, but no one responsible for putting him in that game should look back now and feel an emotion that isn’t regret and self loathing.

Overall though, I would still have to vote Streets of Rage 2 as my favourite of the series. Although it doesn’t have all the combat advancements of the third game, I think the overall quality of the game is outstanding. Everything from the graphics, to the incredible soundtrack and great atmosphere of it just seems a lot more memorable. It’s the perfect balance after refining the first game, but before arguably overcomplicating things in the 3rd.

Bare Knuckle III scores a B+. Streets of Rage 3 scores a C+. Hoping for a pun? Try finishing the article on NORMAL mode