Of all of Marvel’s major properties, it looks like The Incredible Hulk is the one that the media is most obsessed with getting right.  Consider for a moment just how many movies, primetime dramas, cartoon shows, videogames, and toy lines have tried their hand at representing the Mean Green Machine.  Think of the Hulk TV show of the 70s, both of the Hulk films, The Incredible Hulk: The Pantheon Saga for the PS1, Hulk: Ultimate Destruction for the Xbox/PS2, those kick-ass Hulk fist toys you pummeled your sister with.  Now, consider just how relevant or interesting you consider The Hulk to be these days, even after all that material has been stamped down your throat with a chimney sweep’s brush.  Not all that relevant, right? 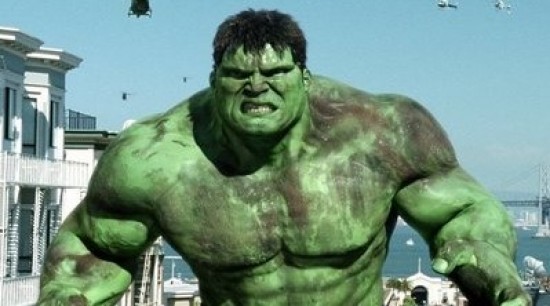 Am I the only one who enjoyed this movie?

Why is that?  The Incredible Hulk is one of the most well known figures in comic books, one of the most recognizable visages in popular culture, and yet so few list him among their favorites in the annals of superhero stardom.  Is it because of his brutish, seemingly aimless demeanor?  Is it because of the one-note nature of his power – get angry, grow big, beat shit up?

The Incredible Hulk has always been of significant interest to me, but I too am guilty of ignorance about a lot of his universe.  As a youngster, my attention was usually drawn to the most vicious villains, primarily those who came bundled with gnashing teeth and bloody claws.  Hulk’s villains rarely caught my attention, and so I guess the hero kind of fell beyond my radar as well.  With my eyes trained on beasts like Carnage, Wolverine or Violator, it comes as no surprised that I missed out on the surprisingly decent Incredible Hulk game for the Genesis.

When I stumbled upon the emulation for The Incredible Hulk a few weeks ago, I immediately knew it was going to be mentioned in this feature.  But then I put that thought aside.  Every week, some other game that I had already known and adored pushed its way to the head of the line, and poor old Hulk was once again suppressed, forced to sit on the bench as his more popular peers took the plate.  This week, my guilt can’t be ignored any longer.  It’s time Bruce Banner had his due.

If you play through the first level of Probe’s game, you might not blame me for putting it in the back of my mind for a little while.  The art design of the first stage is painfully bland, made up of city environments with almost no buildings in the foreground, repetitive cyborg enemies, and boring, angular platforms that threatened to lull the player to sleep within the first few moments of the game.  Perhaps the most frustrating thing about the level design is the woeful lack of smash-able hazards.   One of the staples of the Hulk experience is destroying your surroundings with little or no concern for the consequences.  Aside from the occasional wall or telephone booth, Hulk is left to use his gargantuan fists on enemies alone.  After a while, I started to feel like a kid walking into a toy store that’s going out of business – where are all the toys?!  How the hell am I supposed to scream “HULK SMASH” without destroying anything? 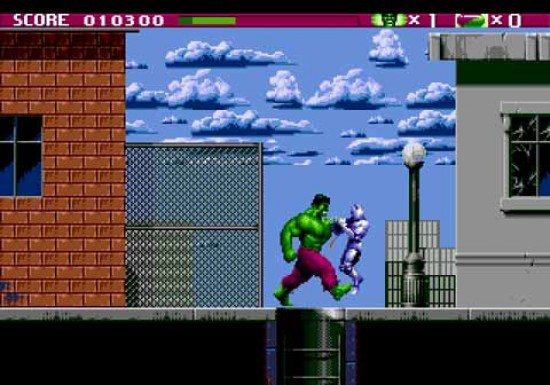 No, you can't break that lamp post. No, that broken window wasn't your doing.

One of the only saving graces in this ho-hum visual style is Hulk’s intricate character design.   When he climbs a ladder, every defined muscle on his body moves with him, flexing with each step.  When his power grows, Hulk emits a detailed roar out towards the fourth wall, delivering an extra little bit of emphasis on your increasing strength, and making you feel just a little bit more empowered.  My favorite visual detail comes when Hulk performs a “Sonic Clap”.  Hulk’s hair actually flits back in reaction to the massive impact, a nice little touch that just isn’t seen in most 16 bit games.  If only Probe applied this same level of intricacy to the rest of the title’s visuals.

But enough about The Hulk’s attractive physique.  How did they approach his powers?  One of the most intriguing elements of Hulk as a character is the unbridled, Jekyll vs Hyde nature of his transformation.  Unlike most of his comic book brethren, Bruce Banner is rarely in control of his powers.  He is only superhuman half of the time.  The other half, he is like the rest of us – scrawny, meek, defenseless.  How can a game approach this dichotomy without losing sight of that sense of empowerment that’s perceived as crucial to making a Hulk game fun?

Note: This is an SNES screen, but it's the only one I could find with Bruce Banner

Probe approaches this difficult contradiction by rationing out Hulk’s powers in stages – Hulk, Super Hulk, Hulking Out, and plain ol’ Bruce Banner.  Each of these different versions of the big green dude utilizes a slightly different moveset, adding an impressive depth to an otherwise plain action-platformer.  Regular Hulk can punch, slap, head-butt, and throw his enemies, while Super Hulk has the “Sonic Clap”, the “Foot Mash”, a double punch, and the ability to smash enemies against the ceiling.  When your gamma power is maxed out, your “Hulk Out” moves are even more emphasized, with higher jumps, faster movement, and the ability to charge added to your already impressive arsenal.  When I reached these higher levels of monstrous strength, only then could I forget the game’s lack of smash-able items.  It is incredibly fun to string together headbutts, beastly slaps and crushing stomps, as enemies around you fire helplessly.  For a few moments you truly do feel like you could decimate anything.  Unfortunately, once these initial spurts of entertainment start to wear off, you start to realize just how ludicrous some of the button inputs are for the more powerful moves.  To charge your enemies, you have to hit forward, forward, C, forward.  To do the Sonic Clap, you have to press all three face buttons at once.  Just to stomp your foot, you have to press down, up, down, A.  Come on, Probe, this isn’t a fighting game.

The most irritating element of Hulk’s gameplay is its muddy physics. While Hulk’s power is apparently to jump high, its implementation in this game is incredibly wooden. You can consistently feel his daunting weight dragging you down, and while I guess that is appropriate, it can make some areas where precision is crucial rather frustrating. At certain points, the stage becomes a bit too narrow for your massive size and clunky movements, and without a transformation capsule to reduce your size, you have no choice but to repeatedly throw yourself at your obstacle and hope that it eventually works. 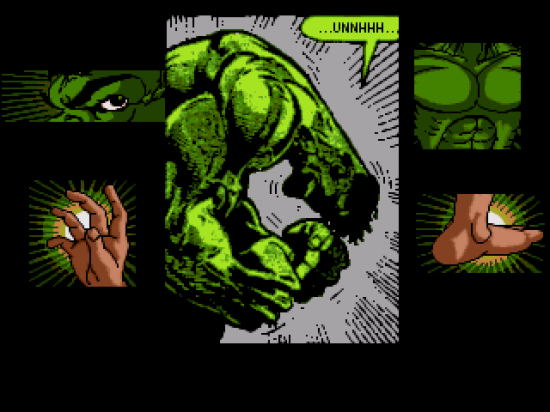 That’s right: this is a Hulk game where I wanted some more of Bruce Banner.  As you might expect, Banner is cripplingly weak, adding a sense of urgency whenever your power is depleted.  However, instead of making his vulnerability the impetus to gathering gamma and returning to your former green glory, Banner is given his own set of invaluable capabilities, the most useful of which being his ability to crawl into small spaces and thus into previously unreachable sections of the levels.   This peels the otherwise boring veneer away to reveal labyrinthine offshoots to some of the stages.  If you have a transformation capsule, you can even switch to your human form on the fly, allowing you to reach hidden items and secret areas that the Hulk could never reach.  My only gripe is that this concept could have been taken much further.  Transformation capsules are way too scarce, so Banner’s abilities are somewhat neglected in the later stages.   A further exploration of his mechanics could really have opened up a whole new door for the gameplay.  Weakness is an element that videogames tend to steer clear of, which is a shame, considering its potential to intensify and diversify an experience that relies solely on empowerment.

Like the actual character, it’s this duality of Hulk and human that makes this Genesis title worth some of your time.  It’s easy to lose sight of Bruce Banner’s tragic back-story in the midst of Hulk’s blaring announcement that he does indeed SMASH, but if you look beyond the plainness of the graphics and the predictable punch-em-up gameplay, you’ll find that there’s actually something kind of fun  laying underneath.  This definitely isn’t a title worthy of more than one playthrough, but if you can empathize with my guilt for never having given it a try before, you might be surprised at how enjoyable it actually is.  Besides, his role in Marvel Vs Capcom isn’t the only cool thing he’s ever done. 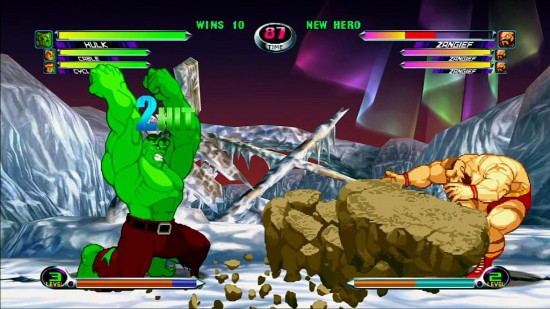 But I wouldn't blame you if you just played this instead...

So yeah, I guess The Incredible Hulk for the Genesis can wear the torn purple shorts.  Only for a couple minutes, though.  After that it’ll just wear out its welcome.