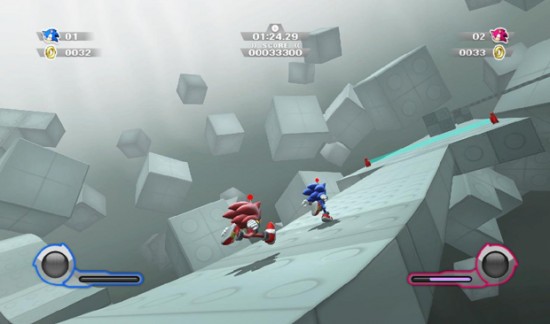 I’m super excited for Sonic Colors. I even have both versions preordered so I can get two hats. These new screens found on Amazon both make me more and less hyped for the game. 2-player, simultaneous multiplayer would be fantastic. I loved how it was done in Sonic Adventure 2 and was kind of hoping we’d see more of it in the new game. But, a recolored Sonic? Again? I really hope that’s some kind of gametesting placeholder. I’d take Shadow again over another Sonic recolor. And I’m sure this is some weird, physics testing level but it looks like it would be pretty rad to run through. Maybe it’s some VR-ride in Robotnik’s theme park.

The Sega Addicts Speak!: What Sonic game would you like to see after Generations?

Rumor: Margaret To Be Added To Persona 4 Arena Ultimax?