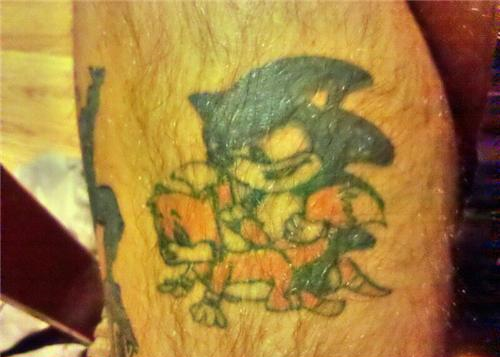 You know, why wouldn't you get this tattoo?

Once again, the sun has risen and it is time for the ancient society of the Sega Addicts to crawl out of their caves and wish upon you the games they have been playing. That’s right, it’s Stevie Grant’s : What we’ve been playing! 100% filtered and manufactured by myself, to get all that juicy content onto your monitors each week!

Stevie Grant- Writer of Top 10 Worst and Reviews of Games I Haven’t Played:
I played Sonic Colours and beat it in the same day. Good game. Not amazing but really quite fun. Other than that all i’ve been playing is Zuma Blitz on facebook. I will beat Alex Batbatsis’s score if it literally kills me. Watch out, Alex!

Brett Hatfield- Community Manager and writer of Megadriving:
Tons of Resonance of Fate, as per usual these days. I might’ve dicked myself in this upcoming section, though, since I seem to be a bit underleveled, somehow. Still back on that BlazBlue kick as well. I think I’m actually pretty passable with Noel now, but I feel like Kris and a few of my other friends that play it could still kick my ass. Especially now with my broken finger. (Protip: Fighting games aren’t exactly easy with a piece of wood attached to your hand) And finally, both Mutant League games, for Not-MegaDriving this week.

Andrew Galbraith- Writer of Contemporary Alternatives and Miscoded Confidence:
This week, I’ve been playing a lot of Geometry Wars 2 and Toy Soldiers getting back into my video game groove following a very hectic two weeks. In the interim, I’m still hopelessly addicted to playing through World of Warcraft, which has caused me to lose my job, family and friends. Just kidding. On the Sega front, I’m still trying to get through episode I of Sonic 4 and I can’t quite get excited about it anymore – c’est le vie.

Alex Barbatsis- Writer of Retro Reviews and Freaky Fridays:
I’m playing Super Meat Boy with its composer DannyB. He is very very good. Also, this week has been all about Zuma Blitz. I’ve never had to grind in an arcade puzzle game before, and I’m loving it. Plus, Matt Jay’s father gave me early xmas gifts! He gave Matt Jay a lump of coal (it was actually a dried up turd, shhhh!)

Matthew Jay- Writer of 10 Things That Aren’t Sonic and Radvertisements:
Ys: the Oath in Felghana is shit hard. SHIT hard. It’s a string of boss battles and each one is harder than the last. Ys:OiF is like your bro who throws an awesome party but ALL of his friends are dicks.

Each fight takes forever and you have to do it a few times to finish. Even though you’ll hate it while it’s going on, when it’s over you’ll feel really good about it. It’s like the opposite of sex.

Alexander Sargeant- Writer of Retro Reviews:
Enslaved- Which is decent but irritating as the female lead concerns concern for me despite giving me a damned headband to make her slave, and I’m sure if she was a selfish bitch it’d be far more interesting.

Fist of the North Star- Which is pretty fun except not quite as good as most of the Warriors series with Gundam included, somewhat disappointingly. Some day they’ll learn that it’s not fun to take a lot of time fighting every little grunt (Only bosses shouldn’t die from a full combo).

Rune Factory 3- Which is glorious, as I hadn’t actually played any of the games except for the Wii one and didn’t realise just how much faster it plays out on a DS. The incredible pace makes anything that could be tedious absolutely inoffensive and I have a weird addiction to stacking giant piles of sprites atop each other.

Atelier Rorona- Which is rather cute and charming but a little too carefree to really hold my attention for all that long. I miss the combat heavy nature of Mana Khemia and the VN elements of Ar Tonelico.

My visual novel addiction has now moved onto G-Senjou no Maou which seemed both interesting and pretty lengthy, which is something I’ve missed from the last couple I’ve read through. Enough to keep me busy until My Girlfriend is the President is Quality Controlled.

Oh yeah, and SONIC COLOURS COZ WE GET IT BEFORE THE US ZOHMIGOODNESS!

Josh Newey- Writer of With Great Power Comes Great Games and Underappreciated Gems:
Damn you Sargeant. Just had to rub that early release in my face…

I’ve been playing a bunch of Banjo Kazooie, which I never really got the chance to try out back in the day because the N64 was an enemy. A vile enemy. After getting over the irritating camera and the slowest swimming mechanics I’ve seen in a while, I’m really starting to dig it. I squealed like an idiot the first time I transformed into a walrus. Trust me, thinking about it even now has me tucking in my chin and smiling coyly. I’ve also stepped back into my next playthrough of Shenmue, which I started some months back and didn’t continue for whatever reason. All this Shenmue City news inspired me to keep on going. I got a Ristar collectible in the game. I wish it was real.

Kris Knigge- Reviewer and Podcast Co-host:
I really need to get my copy of BBCT back so I can play Brett… That or he needs to get BBCS! Also, I gotta disagree with Alex S on the Fist of the North Star thing. It’s… interesting, but I wouldn’t really call it fun. There are moments of fun, and the shortened story is still interesting, but overall, It’s not my jam.
Guwange’s great (Topher was right!), but I’m still no good at it. I’ve also been doing some TF2 and L4D2 with some of my college friends on PC lately, and been pleasantly surprised.

Alex Riggen- Editor in Chief and Podcast Host:
Finished my first playthrough of Fallout: New Vegas. I sided with Mr. House and I haven’t decided if it was the right choice or not. I kept my save before the last mission though so I can continue on and someday finish the huge amount of content I’ve yet to discover. Since then I also played through the singleplayer campaign of Modern Warfare 2 for the first time. A co-worker lent me the game and I’d have to say I was presently surprised. There’s some amazing moments in there and it was fun while it lasted. I’m glad every game isn’t quite as linear and overthetop action as it was but it was a fun break from something like Fallout.

And that was this weeks transcription from the past. Next week I’ll perform the impossible and find out what we’ll be playing in 2 years! So stay tuned for that folks!

Also if you feel like telling me what you’ve been playing, give into your urges and do it! There isn’t a comment box for nothing, you know! Don’t dream it, be it! Yours is the drill that will pierce the heavens! With great power comes great responsibility! OK, I’ve run out of references now, go away.

The Sega Addicts Kids Table: Episode 39 – Much Ado About Circumcision