"So I hear no one recommended me last week. Now I'm PISSED!"

Hey Sega Addicts, as you could probably deduce from my Not-So Classic Games post on Sunday I’m all healed up and ready to write. A huge Thank You goes out to fellow Sega-addicts writer Brett Hatfield for covering for me last week. Unfortunately this was another lame week in the forums, so this is going to be a relatively quick post. I put the blame for this on two things: first because most of our community members seem to be students and this is a busy time of year, and because I myself was incapacitated for most of the week and was thus unable to do much forum-ing. Well that’s all changing today, I’m going to write a full post on an empty forum, then each and every one of you is going to JOIN THE FORUMS and then you’re going to post like crazy. But first, click that crazy “More” button and read on.

We’ll start with the challenge that Brett set for us last week:

So I’m giving you your lone challenge for the week early: Just post. Be active. It’s no fun when there’s just one or two people posting for the most part! It’s easy enough to accomplish, so don’t you dare let me down!

Overall I don’t think we posted as much as Brett hoped we would, but from what I can tell the forums were a bit busier than the week Brett had to write about, so I’ll give this one to us. Conglaturation!

So what did we actually discuss this week? In the Sega-Addicts Podcast section we talked about the newest podcast – Mickey Mouse Games. This one seems to be fairly popular with the community as there is plenty of activity in that thread and there is sure to be plenty more. The Contest thread was revived in honour of Manic Maverick receiving the game Blue Stinger. This thread wasn’t the only one revived though. Strangely enough episodes 32, 34 and 35 all had a slight resurgence. I think that just proves the timelessness of the Sega-addicts podcast. 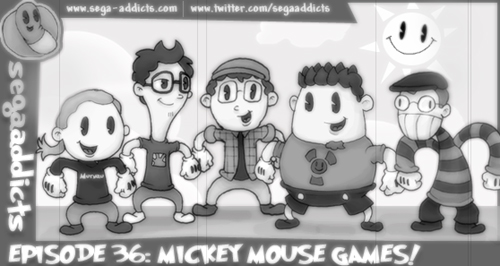 Seriously, this is an awesome image. Great job, Tom.

As for Sega games we discussed things we miss about older games proving that people just had an itching to discuss classic Sega-addicts threads this week. We also did a lot of talking about Sonic Colours given it’s recent release. The thread covers both the Wii and DS versions, so if you’ve got any sort of opinion on or interest in either of those games this is the thread for you. Finally, we kept on talking about the Sega-RPG unfortunately released simultaneously with Final Fantasy XIII Resonance of Fate. The game suffers from a terrible release date but is apparently a largely enjoyable game. So improve your life and go learn about it NOW!

On the Non-Sega Gaming front we kept talking about the recently released Fallout: New Vegas. There are some mixed opinions about this game in our forums, so get in there and have your say today! We also revived another great thread: the your favourite crappy games thread. This thread is going to be a great inspiration for some Not-So Classic Games features, I can see it now. Finally my favourite thread I’ve seen in our forum in a long time comes in the form of the Which Video Game Universe Would You Live In? thread. I chose the Ace Attorney universe, but there are many other interesting ones, and it’s a ton of fun to think about. If you know what is good for you you had best GET IN THIS THREAD RIGHT NOW.

Heh… sorry about that. Moving on, in the Music/Movies/Books/Comics/Stuff section we revived my much loved Creativity thread. Saiyavenger has some more of his cars on display, so check them out pronto. Also if you want to make forum news really awkward you can demand some NSFW short stories. I’m not going to go into detail, so if you’re over 18 years old, or if your parents aren’t looking you should check it out. We also rated some movies we watched. This thread is a timeless classic, so if you’ve seen a movie recently get in there and tell us about it.

Finally, the Bar, despite the general lack of activity was still the Bar. In the Bar thread we talked about that guy who landed on Joan Kusack. That’s all I’m going to say about that. Stevies forum was as crazy as it typically is, so check that out right now. While you’re there give him suggestions on what to do with an image he now has. Also, we now have a thread about hats. Oh yes, it includes that incredible Sonic hat that came with pre-orders of Sonic Colours. Perfection. 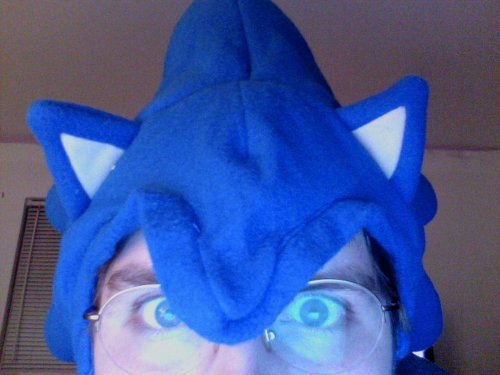 So that leaves us with this week’s challenges. I’m going to take the easy way out and make this week’s challenge simply this: POST MORE THAN LAST WEEK AND DON’T LET ME DOWN. That includes activity in all sections of the forum. ALL OF THEM. I want the forum to be jumping this week, or so help me there will be hell to pay. That said, have a great week, Sega-addicts! See you in the forums!

The Sega Addicts Forum is now up. Seriously.

Forum News: Holy crap, I’ve been writing this garbage for a year now