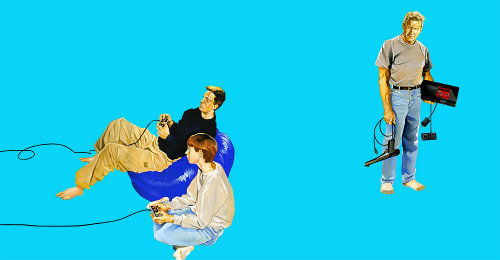 Wow I’m lazy. That’s right it’s only taken me nearly half a week to post last week’s version of this thing I do every week. In all fairness I have been busy doing nothing. I would have just left it too but I want to make sure you all know exactly what we’ve been playing in case your life depends on it.

You never know what life will throw at ya, so hit the jump just to make sure!

Stevie Grant- Writer of Top 10 Worst and Reviews of Games I Haven’t Played:
I played Night Sky which is an amazing indie game. Get it. Really fun puzzle type, thing. Enjoyed it very much. I didn’t play anything other then that however so that’s all you get this week from me. I’ll probably try and finish Vanquish though sometime in the next couple of days. So that’s something.

Brett Hatfield- Community Manager and Writer of Megadriving:
Same as usual. BlazBlue, Madden, NCAA, and Smackdown. Also, thanks to a new Japanese PSN, played the demo of the new PS3 Bleach game, which felt a bit like Dynasty Warriors under a Bleach filter. Still haven’t beat it, but I’d definitely consider getting the game if it hit US shores. Now if only I could read Japanese so I knew what the hell I was doing…

Alexander Sargeant- Writer of Retro Reviews:
I am seriously excited about doing this now, because I played something VERY good. Phantasy Star Portable 2 continues to be a lot of fun, although forcing you to go through story mode to get new shops/trade missions is a bit of a dick move.

Prinny 2 is atrociously difficult, especially having to play it on a PSP. I will beat it sometime, but we’re back burning it until I don’t mind getting my ass kicked so much.

The game of the week is called ‘Malicious’, and is only available on the Japanese PSN. Positive coverage from Siliconera and GamesTM convinced me to finally pick it up, going through the trouble of paying far more for a pre-paid PSN card than I ever should. The upside of this is that it is incredible. Visually, it’s the most incredible looking downloadable game I’ve ever seen. Not only in detail but in design too, as there are some incredible touches to almost every part of it. It’s essentially a boss-rush game, split into six stages. Each stage is comprised of a single boss and a multitude of other enemies, and the goal is to entirely obliterate the main boss. The sheer scale of this though is pretty incredible, as one stage is comprised of a Tower Knight style encounter, but with a hundred or so knights chasing after you, firing cannons and warping in monsters as well. You can take any stage in any order, and each gives you a new upgrade to make the next levels easier, but each stage also becomes more difficult, for instance the you start having towers appear with massive cannons on the top that drive around looking to kill you.

Every part of it is frankly amazing, from small touches like the way that your limbs can be destroyed and regrown without fixing the fabric of the clothing, to magnificent displays of accumulating power, like crossing an entire stage in seconds riding a lance woven from your obsidian cape. Although I had to pay way above the usual price to get it, it’s still been an incredibly rewarding purchase. In a time where so many games have trouble justifying their retail price tag, this is a game that makes me entirely okay with being completely ripped off by an unreleated third party. It’s really that good.

Andrew Galbraith- Writer of Contemporary Alternatives and Miscoded Confidence:
This week I’m playing Ghost Trick for review while still slugging it out through Dead Space before the sequel hits at the end of the month. For my Miscoded Confidence this week, I sat down with the Genesis version of Battletoads, so be sure to check it out. I also has a chance to check out the new Back to the Future game and still am trying to discern whether or not I really actually enjoyed it or not. Additionally, I’m having a small romp through my childhood again after getting my hands on The 7th Guest for the iPad and remembering how obtuse some of the bloody puzzles were in the game. Finally, I’ve been keeping my distance from WoW and have since setup an EVE account, which should end about the same way as my love affair with Azeroth.

Josh Newey – Writer of With Great Power Comes Great Games and Underappreciated Gems:
I don’t often get angry at videogames, but the last mission in Red Faction: Guerilla is pure, 100%, Grade A BULLSHIT. I’m not sure I’ve ever had the difficulty ramp up so significantly in the final 10 minutes of a game. I was shouting obscenities that I didn’t even understand, in indistinguishable tongues meant solely for creatures of the nether realm. Plow through a good mile of hundreds of malicious tanks and plasma cannons whose utter disregard for their own welfare is only matched by their ungodly numbers and firepower. Reach a base at the top of the mountain that is swarming with soldiers of every type imaginable. Crawl to the very peak, warding off warplanes, snipers, and every other hard-to-reach target that the game has to throw at you. Once there, fight off another swarm of military vehicles and one giant-ass tank who harbors the capacity to kill you in a single shot. Once he’s done, brave another wave of airships as you fire at large steel doors at the other end of a clearing to allow your comrades to fire off the final shot. Good God that was irritating.

I also tried a couple XBLA Indies, including the second chapter of Decay and a demo for the similarly bleak Soul. I’m not usually one for Myst-style point and click adventures, but Decay’s relentlessly grim atmosphere and intriguing premise has me hooked so far. The second chapter is much meatier than the first. I can’t wait to try Chapter 3. Soul seems like a simple Irritating Stick type game, made fresh with the clever concept of a disembodied soul navigating the halls of a hospital. If the rest of the game can keep the exceedingly simple gameplay interesting, I have a suspicion it will be right up my alley.

Tom Kyzivat- Artist and Podcast Co-host:
I’ve been bustin’ the freshest this week! After our Jet Set Radio episode I ordered myself a copy of Future, but the first one was defective. Lame. My new copy arrived this last Monday and I’ve been playing the HELL out of it! Alex and Kris were right–this game is sooooo much more fun than the first, and the level designs are insanely intricate and fun to play in. Nice cast of characters, too, and the music is totally FLY. Makes me want to bust out my old pair of roller blades and go sort some fools.

So that was a brief games of the week. What were the others playing? You may never know! But you can tell me what you played last week to make up for it. That’ll do.

So that’s if for this week, next time I won’t be so lazy and i’ll post it at the end of the actual week it’s about. Let’s all hope, folks!