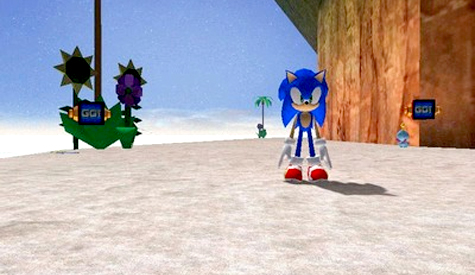 Welcome to the new regular feature “The Sega Addicts Speak!” The concept: a Sega related question gets asked to all the Sega Addicts staff and the results are found below. Simple, eh? Feel free to join in on the discussion by leaving your own answers in the comments below.

This week’s question is “If you could only play one game in the Sonic Universe for the rest of eternity what would it be?” Remember, we’re not being asked what the best and most well designed Sonic game is but rather one we could imagine playing over and over again and still enjoy it the most.

John Doherty: I would have to go with Sonic 2. The level designs, music and controls are all amazing. It also holds a soft spot in my heart. It was the first game I ever beat as a kid. I spent hours sitting on the floor in front of our TV playing this game obsessively. To this day I can sit down and play the game and still have that child like sense of wonder.

Brett Hatfield: I dunno… Pretty tough question for me… I wish I could go with one 2D and one 3D game, but since I can’t… Well, I’m going to be very blasphemous and say the PS3 version of Sonic Unleashed.  I know I’m gonna be murdered in a back alley with a Nomad for saying that over the still-better 2D games, but in terms of personal replayability (I heart speedrunning) and how well it plays, it’s easily in my top five favorite Sonic games, and the one I’ve played the most over the past couple years by a wide margin. I even like playing werehog levels, despite it being an unneeded gimmick (I’m a sucker for Dynasty Warriors style beat-em-ups).

So yeah. Unleashed for an eternity sounds ok to me. Besides, I’ll need that much time to beat the hot dog missions on Eggmanland…

Stevie Grant: Well this sure is a big question to start with. But the only Sonic game I could ever see myself playing until the end of time is the one I have been playing up until now anyway. That’s right, my choice is Sonic the Hedgehog 2. Now I know that this is probably what everyone else will say but that just says something about the game more then it does about us being predictable bastards (although we are predictable bastards). Sonic 2 is super fun to play and with all the different paths I keep finding even all these years later it reminds me that a game can be however long it wants, but if it hasn’t got good level design to back it up, then what’s the point of playing it for that long? I’d rather play a short Sonic game over and over again until the end of time then play Sonic 2006 because it’s longer.

That’s why Sonic 2 is the game I would play forever. Amazing level design and charm and all.Of course I’d take breaks in between though. Oh also one more thing: Fuck Oil Ocean Zone. Fuck it.

Josh Newey: I’m actually taken aback at how difficult this question turned out to be.  At first, my kneejerk reaction was to go for the obvious Sonic 2.  I’ve played it and completed it more than any other game in my gaming career.  As I went on though, I started to piece together the concept of playing it alone forever, and I felt less and less OK with that.  The game is missing one element that I consider essential to a lifetime without 99% of Sonic games – Knuckles.  Knuckles has always been and always will be my number one favorite Sega character of all time, and being stuck with a single Sonic game would probably be made a hell of a lot less dull with some varied gameplay.  I considered Sonic Advance, but I’d want to have my Sonic experience on a television.  Handheld gaming is great and all, but it’s definitely a secondary way to play, since Sonic’s best games are just as gorgeous to look at as they are fun to play.  What if I inserted Sonic 2 into Sonic & Knuckles and duct taped them together?… But then I couldn’t play as Sonic.  Finally, I decided to go with Sonic & Knuckles all by its lonesome.  It’s got my favorite Stage tune of the series (Flying Battery Zone Act 1), some gorgeous and gigantic stages, and the ability to play as both the Blue Blur and the…Red…R…Racer, making it the best 2D Sonic game to be stuck with for the rest of my life.  It may be short and a little frustrating at times, but these niggling flaws aren’t enough to bring down my man Knuckles.

Alexander Sargeant: It’s interesting that Sonic never had his ‘All-Stars’ cartridge, certainly until around the PS2’s life cycle. Mario fans would have an easy time with this one.

For me it has to be Sonic Adventure 2, for a whole lot of reasons. Yes, there’s a lot of game here that I don’t enjoy. To hell with the treasure hunting stages. However I do enjoy the shooting segments so there’s a good 4/6ths of the main stages I’m happy to play through again. What makes it replayable in my eyes is the addition of various missions on each of the stages. I loved having a reason to go back to ‘Metal Harbour’ again rather than just to improve my arbitrary score. Sometimes it was to collect 100 rings, others you had to just speed through the stage as fast as possible. They weren’t much, but they were nice little challenges to keep me interested. The real incentive to do these however was to unlock a hard variant of the stage, which was a kind of rearrangement with new hazards and enemy placements.

And there was one of these for every stage in the game! I never did manage to unlock the 3D Green Hill Zone stage for getting all 180 emblems, so if I were stuck on a satellite hidden in a fake moon with nothing else to play, I could get a lot of enjoyment out of the same old stages again and again. Especially collecting cores to feed to the chao. Lets not forget SA2 also had that whole racing/evolution business which I found incredibly compelling, and I definitely ended up getting pretty attached to a certain skull-hatted ghost that lived in the Dark Chao Garden. This choice also has the bonus of me getting to play a Dreamcast for all eternity, which is an infinity I’m pretty okay with.

Pat Reddick: To be honest this is a tough choice for me, and not in the way it is a tough choice for the other guys. I’m not choosing between several fun-to-play games, I’m choosing between two different ways of having fun. I love Sonic 2, so it seems like the obvious choice, but it’s actually not. I know that it sounds weird, but I could actually see myself playing Sonic 2006 for the rest of eternity. Sonic 2006 is, for me, one of those games that’s so bad that it’s good. I think a large part of the reason for this is because when it came out I didn’t pay it a whole lot of attention, so I was never actually disappointed by it. In fact, I went into it expecting to play one of the worst games ever, so in a weird way I was highly satisfied by it. I love playing games that are just beyond terrible, so an eternity with this game wouldn’t be nearly as bad for me as it would be for other people. That said, I think most of the Sonic 2006 novelty has worn off for me at this point, so I would still choose Sonic 2. If for no other reason than because in that game Tails’ voice doesn’t make my ears bleed.

Kris Knigge: When I saw this question, I was initially going to be all snarky and say Sonic Jam, but now that I think about it, I’m going to have to say (brace yourselves) Sonic Adventure 2 Battle for the Gamecube. As a kid, I put an obscene amount of hours into the game (I’m talking like JRPG-esque amounts of time) trying to get A emblems on every stage (I got close, too! Only missed a couple of Sonic stages), playing battle mode with friends (even treasure hunting and go-kart racing), and raising my chao. Besides, the Gamecube version had more multiplayer modes and a better controller for the game (yeah, I said it!) and those two elements would be nice additions if I had to play until the end of time. Besides, if I was going to play for the rest of eternity, I could memorize all the lyrics to every song.

Alex Riggen: I have to go with the original Sonic Adventure for my choice. I think its far from the greatest Sonic game ever made but if I had to sit down and play a Sonic game over and over again that would be my choice. I do believe that Sonic Adventure 2 improved on the Sonic level formula but everything else about that game is worse to me. Sonic Adventure has six characters (of various quality) to play with, an open world to explore and mess around in, less Knuckles “find the emeralds” levels, Chao gardens, and VMU games! So yeah, Sonic Adventure and I will be spending a lot of time together if I ever truly have to play one Sonic game for eternity. I’m kind of curious to see what kind of situation someone would be put in that would require them to answer this question for real.