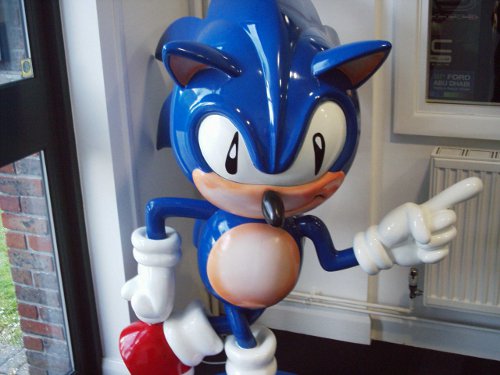 What the fuck is that thing?

Hey guys, I’m back! Yes the worst writer you know is back in the habit and ready to rumble. Yeah sorry about that. Fucking internet.

So I guess we’ll never know what last week’s article of this would have brought to the table. Oh well. At least this is back again. Hooray. Hit the jump friends.

Stevie Grant- Writer of Top 10 Worst and Boss Attack:
I replayed Sonic Adventure 2. Could have been a great game if it had more than two Sonic styled stages. Seriously he gets sidelined in his own game.

Also played and beat Ms Splosion Man. Brilliant game. Except for the last boss though. It had nothing to do with any of the platforming before and just changed the gameplay completely. The ending cut scene however is amazing. So I guess that sort of balances stuff out. My point still remains though.

John Doherty- Writer of Take Cover:
I’ve been playing a lot of my own game. Seriously though, a lot. I played some more Sega Bass Fishing my shiny new Fishing controller. In case you were wondering, it’s awesome. As usual I played some League of Legends, but really that’s about it. I’m boring I know.

Alexander Sargeant- Writer of Retro Reviews:
I had a moment of melancholy while I wished more of Flight Plan’s games received a localistation. They released a new Summon Night game on the PS2 just last year. Sometimes I hate how fast technology is moving.

I tucked into a little of Eternal Poison, which is decent although the jump between 3D fights and 2D strategy is very intrusive. Still it oozes in that macabre serious style that Stella Deus started with and plays with it very well indeed. Other than that it’s been DUNGEONS OF DREDMOR, effectively a point and click roguelike that simulates what it’d be like to go dungeon crawling on Monkey Island. It’s very goofy and rather well presented, but still has no fear of kicking your ass. There’s a phrase that will carve fear into the hearts of everyone who happens across it for quite some time, and should never be joked about in any situation.

So say the victims of the MONSTER ZOO.

I played some EDF Insect Armageddon and some Valkyria Chronicles 2. Aside from that and some Darkstalkers on PSP (purchased for $5 on sale two weeks ago), I haven’t played much of anything.

Sven Wohl- Sexy new(ish) writer:
I played a lot of Radiant Historia, slowly moving forward in the plot. Phantasy Star Portable 2 got another renaissance for me this week and I’m having a lot of fun with the title overall. Played some Goldeneye on the Wii, which is surprisingly good and started playing Saints Row 2 which is hilarious! Unfortunately, all the work keeps me from playing anything for longer than half an hour, so that sucks…

Played Kirby’s Dream Land on Virtual Console. It was a really fun game although quite short. Beat it in a couple sessions.

Contract J.A.C.K. for PC, which, is a spinoff from the No One Lives Forever games. Unfortunately, it wasn’t nearly as good as the original games and suffers from average actoiny gameplay and an incredibly short campaign. It kept the series trademark humor and style but that’s about the only good thing I can say about it.

Now, I’m playing Thief: Deadly Shadows on PC. I was a huge fan of the first games when they were released and it’s still one of the few stealth games I enjoy, along with Arkham Asylum. I like the idea of stealth games but stuff like Splinter Cell always feels overly complicated and I don’t find the story/setting of those games to be particularly interesting.

So yeah sorry that last week’s article of this wasn’t done. I’m sure it didn’t contain the cure to cancer though so that’s fortunate. Anyways I’ll see you next week for the same thing. This section is back, baby!