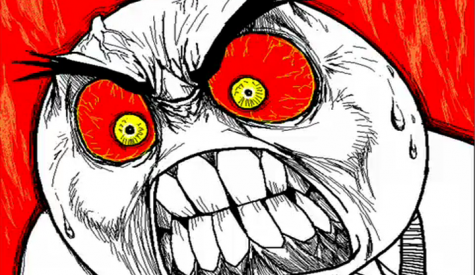 Don’t buy it, eh, John?  I’m just napping away, EEEHHH JOOHHNN??!! JUST SNOOZING, SNOOZING LIKE A YOUNG BABE WHILE YOU SLAAAAAAVE in front of the TV.  Oh the AGONY of it all!!!  I’ll tell you something, SIR.  I have been doing these marathons before you were in OSH KOSH B’GOSH OVERALLS!  I know my way around.  I’ve been to the promised land. Back in my day, we played Sonic 2006 at 4AM and WE LIKED IT!

So yeah, I’m back.  Back to show how it’s DONE. I played Power Stone before I went to slee–…er, work.  Yeah, went to work.  Work. WORK.  Power Stone 1 is great.  I think I may even prefer it to 2, if only because so much emphasis is put on extras that the one-on-one combat becomes a thing of the past.  John played some Blue Stinger, which saddens me, as I wanted to play Illbleed at the same time. But apparently, I WAS ASLEEEEEEEEEP!
I’m gonna go get a fourth cup coffee and a handful of Cheezits so I can play Resident Evil Code: Veronica now. It’ll help me to RELAX!!!