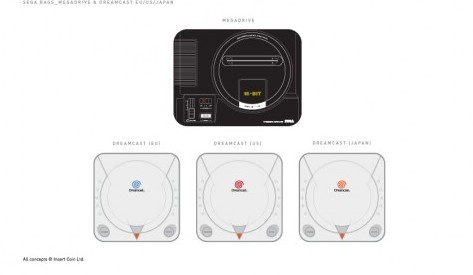 As if the Shenmue, Jet Set Radio, and Streets of Rage shirts from some weeks back weren’t enough, those devious folks over at Insert Coin Clothing are once again whittling away at another brilliant Sega-based idea, apparently hell-bent on obtaining every last penny I’ve got.

Don’t be fooled by the rather plain-looking image you see displayed above–those are not just a few region-specific Dreamcasts and a Genesis/Mega Drive. Nope, they’re bags. That’s right, full-on bags themed after the two best Sega consoles (yeah, I said it). As you’d probably expect, the Genesis/Mega Drive bag is the bigger of the two, and should be capable of toting around your average laptop. The Dreamcast bag is a decent amount smaller, but can still carry other techno standards like iPads. Both bags will offer plenty of little pockets, so these will be just as useful as they are pretty.

While costs are still being confirmed, the bags are currently looking at a price of between £25/$40 and £35/$55. Preorders ought to be up in the fall, though Insert Coin is hoping to have some prototype images out before then.

Anybody gonna pick one of these bad boys up? I’m really digging the Dreamcast ones, if only because I can finally walk around my neighborhood looking like the idiots from The Typing of the Dead. Now I just need to figure out how to rig a keyboard around my waist…