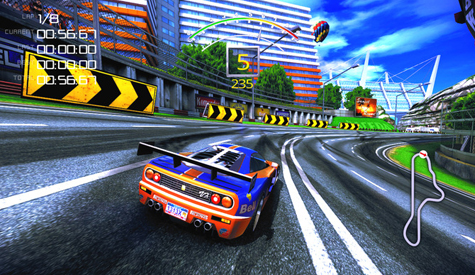 90’s Arcade Racer is a game that caters directly to fans of Sega’s 90’s racers like Daytona USA, Super GT and Indy 500. It reached its Kickstarter goal several days ago, but with four more days to go feel free to send a little more money their way. The game will have three tracks and three cars that all appear to be throwbacks to classic arcade games and the developer claims he’s working diligently to make sure the visuals and physics feel just like their inspirations.

Recently, the publisher Nicalis (Cave Story, VVVVVV, NightSky) has thrown their hat in the ring to help with publishing and extra programming needs on the game. In addition, to the development help they’ve also announced they’ll be bring the game to the WiiU’s eShop along with the planned PC, Mac and Linux releases. Pretty exciting stuff and I’m happy to see that the game will be getting a console release because consoles are neat.

The first Dream Raiders trailer is a dream come true

Virtual On series might return on its 20th anniversary