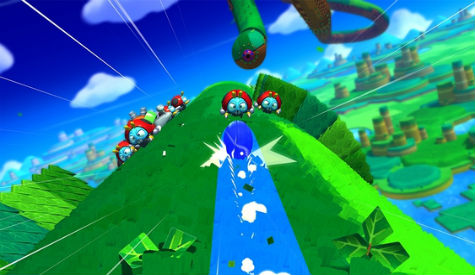 As information steadily trickled in about newly announced Sonic: Lost World for the Wii U, game two of a three part deal with Nintendo, a lot of people jumped to oppose the title, but we remain hopeful and optimistic, especially after IGN’s glowering preview of the game. But one new feature, that almost seemed glossed over, was that Sonic: Lost World will feature a “parkour system” in which rather than being blocked by an obstacle, Sonic will overtake it and continue running anyway. This is what Takashi Iizuka explained to IGN:

In previous 3D Sonic games, even if you’re running through a level at top speed, if you hit an obstacle you stop instantly. To avoid this, we added a new action to keep Sonic running, even when you hit an obstacle. To make sure it only happens when you want it to, it’s triggered by the player holding the run button.

In the preview, IGN had a lot of positives to emphasize; the game looks like an amalgamation of every Sonic title, capitalizing on a wealth of history to pick and choose features from. They referenced the crazier, exciting level design of the Sonic Adventure series, the standard tunnel racing of the classic titles, and a emphasis to form a perfect hybrid between 2D and 3D that Sonic Generations set in motion. The trailer even looked like Sonic X-Treme. Looking away from Sega, they also praised the game’s Super Mario Galaxy influences.

But this “parkour system” is such a drastic change from the Sonic we know…will it still be Sonic? Let us know how you feel.