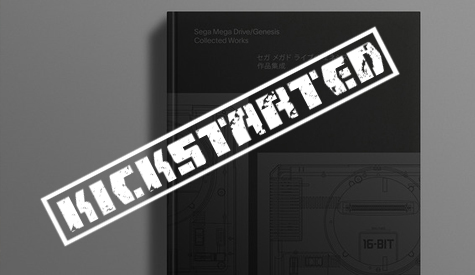 Back in November we reported on Read-Only Memory’s Kickstarter for SEGA Mega Drive/Genesis: Collected Works book. And now I’m happy to inform that this beautiful compilation of Sega’s history has reached its Kickstarter goal.

With £87,742 pledged at the time of writing this post, Read-Only Memory’s new book received almost a third of its £30,000 target. Surprised by such incredible success, designer Darren Wall had this to say:

I must confess I had absolutely no idea the campaign would go like this, so I was entirely unprepared for this situation arising…My immediate instinct is to direct the money back at the book itself, so everybody benefits from a book with more pages, better production values (they were budgeted to be pretty darn nice already!) and even more impressive cover finishes.

The book will be extended to 340 pages and will have new interviews with Peter Morawiec (creator of Comix Zone), Michael Latham (producer of Eternal Champions), Rich Karpp (developer of Vectorman), Greg Johnson (co-creator of ToeJam & Earl) and Ed Annunziata (creator of Ecco the Dolphin).

SEGA Mega Drive/Genesis: Collected Works will be released in June 2014. If you still want to pledge, you have 36 hours left.