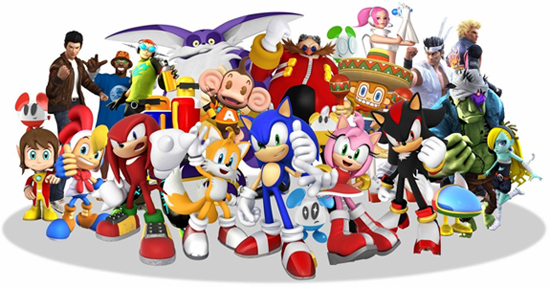 Let me begin this review by saying that I’m not at all a racing game guy. The last racer I put more than 15 minutes into was F-Zero Maximum Velocity for the Gameboy Advance back in 2001. So when Alex asked me if I wanted to review Sonic & Sega All-Stars Racing, I was a bit worried. I didn’t think I could do a racer justice, even if I did get the references and in-jokes. However, I was pleasantly surprised to find the game accessible to the point that I could have even non-gaming members of my family play it. I ended up enjoying the game a lot more than I expected to because of it. However, accessibility and self-reference alone do not a good game make. Is S&SASR a good game? Read on and find out!

The first thing that you notice upon starting the game is that the graphics in this game simply pop. Everything is in a bright, colorful, traditional Sega style, and I love it. While the Wii’s hardware is a bit limiting (there are definitely muddy textures and the game is lower resolution), the overall effect is pretty dang good. The tracks are generally filled with eye candy, such as the killer whale from Sonic Adventure in one of Sonic’s stages, or a bizarre trip through a psychedelic tube in Samba de Amigo’s “Sunshine Town.” Some of Sonic’s stages even use elements from the games such as 360 loops and springs. The game doesn’t disappoint in the visual department, and the strong visuals complement the game’s brilliant use of classic Sega nostalgia. 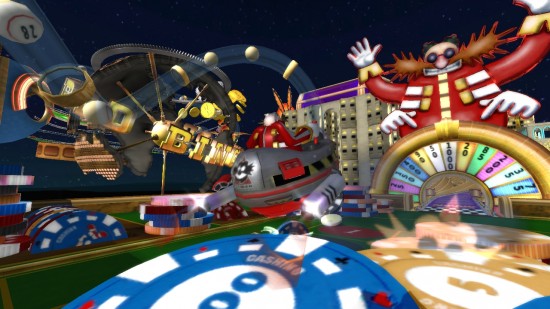 For me, the nostalgia is where the game absolutely shines. Whether it’s listening to “Funky Dealer” or “Concept of Love” while racing through Jet Set Radio‘s Tokyo-to, or going through insane loops in a Sonic Casino-stage-themed track, there’s a ton of things in the game that put a smile on my face. The playable characters range from the obvious (Sonic and pals), to the not so obvious (Beat, Ryo Hazuki, and the ChuChus), to the straight-up unexpected (Alex Kidd and the Bonanza Bros???). Even the game’s achievement-esque “accomplishments” are references to classic and obscure Sega games. Who would have thought that Project Rub would ever have anything named after it? In fact, if you’re the kind of person who would read this website (which I know you are), S&SASR is worth looking into simply for the wealth of curious and charming references it contains.

Speaking of Sega references, this game’s soundtrack is drawn directly from the games featured. My personal favorites are the aforementioned Jet Set Radio tracks, but the selections from Samba de Amigo, House of the Dead, Billy Hatcher, and even Monkey Ball are quite good. While some of the tracks aren’t exactly the songs I’d pick to race to, (Seaside Hill for instance), it’s really nice to be able to choose between your available songs pre-race. There’s something like 40 songs in the game, with 5 to a track. Although most have to be unlocked with “Sega Miles” (points that you get for racing), the selection is very impressive and definitely adds to the “Sega-ness” of the game. 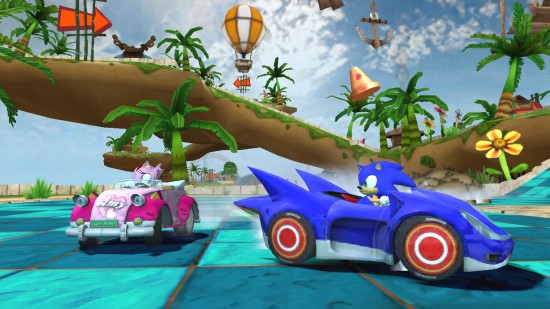 Although I mostly played in multiplayer with my friends and family (more on that later), the single-player offering in the game is surprisingly meaty. You can do single races or Grands Prix if you’re in the mood for traditional races, but the time trials are surprisingly fun as well. Each track contains both the ghost of your best time and the ghost of a staff member, so there’s a certain degree of satisfaction when you beat your best time. Generally, I’m not a fan of time trials, but this one hooked me. The game’s “Mission” mode is simultaneously my favorite single player mode and the cause of a lot of my frustration. While there are some really fun missions ranging from drifting challenges to eliminating NPCs with various characters’ “All-Star Moves” (incredibly chaotic and rather unbalanced transformations that can be activated by getting a certain item while racing), there are also some missions that are ABSOLUTELY MADDENING. However, I do appreciate the effort that was put into this mode.

There were definitely some things I wasn’t a fan of in S&SASR, most immediate being the incredibly aggravating announcer. Imagine, if you will, an American announcer reading a terrible, very short, pun-filled script obviously written by a British person. Then imagine that this Announcer has never heard of most of the characters he is talking about. Now, make this person talk in a bizarre overexcited tone every 15 seconds while you’re racing. Yeah. Now, I’ll let you know that this can be turned off in the options menu, and most of you will do this immediately. My family, who I was initially playing with, liked him. So, for the first few hours of play, I was accosted by the announcer for every race. This was a definite negative, but for those with slightly less insane family members, it may be a nonissue.

The game’s difficulty curve was another issue I had. While rubberband AI can be turned on and off, the jump from “Beginner” difficulty to “Advanced” is pretty extreme. Even though I’m a total racing game newbie, I was getting first place in my Beginner races from the get go. I then decided to bump myself up to advance, and promptly found myself trailing 5 seconds behind the last AI to finish a race. While this got better with a lot of painful practice, I can’t help but think that it could have been avoided with better balancing from Sumo Digital. There are one or two technical annoyances as well, most notably long load times and severely degraded graphics in multiplayer. These don’t detract from the game that much, but they’re definitely noticeable. 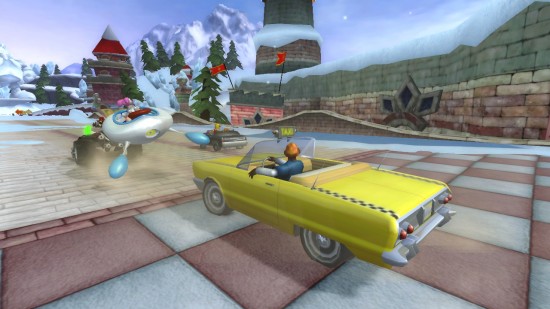 My friend Jayred put it bluntly when he commented on Sonic & Sega All-Stars Racing‘s originality: “This is literally Mario Kart with Sega characters and Final Smashes.” He’s right. The game wins no points in the innovation department, the ricocheting punching gloves are even green while the homing rockets are red. That’s not necessarily a bad thing though. With the simple Wiimote as steering wheel controls (although they later grew to prefer the accuracy of the awesome Classic Controller Pro), I managed to get my family members playing the game and legitimately interest them in some of the games that the game draws inspiration from. Sure, my mother isn’t playing Bayonetta right now, but she’s actually willing to play Jet Set Radio due to the soundtrack and visual style. S&SASR could be a good way to introduce your less-Sega addicted family members to the games that you love. It’s derivative, but well-made and accessible, and sometimes that’s exactly what a Wii game should be.

S&SASR is a good game. It’s derivative and a bit frustrating at times, but it’s also obviously been crafted with love. It’s the product of people passionate about what they’re doing, who revel in their knowledge of Sega obscura. If you’re a Sega fan, or just looking for a fun little kart racer on the Wii, this definitely fits the bill. It’s also a great way to get your non-gaming friends and family interested in Sega. There’s something to be said for a game that celebrates games, and because of that, Sonic & Sega All-Stars Racing transcends its derivative gameplay and gets a solid B.

ALSO! Very special thanks to all of those who sent me links to non-watermarked Wii screens on Twitter, particularly Nintendood! Also, Jordan_M and Kellie from Sega! 😀

The best Sonic clone I have ever seen: Freedom Planet

Sonic Colors may be coming as early as September