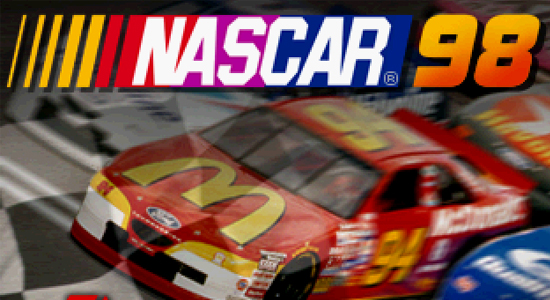 Just looking at this screen makes me want to cry tears of happiness.

So, if you know me well enough (and if you’re reading this article, you probably do), you know that NASCAR is pretty much my favorite racing league in the world, for what it’s worth. Yes, I know it’s basically just 43 guys turning left for three or four hours (except for two weeks out of the season), but for some reason I just love it. And millions of others do too, as the series is second only to the NFL in terms of popularity in the United States. So you’d think, especially in one of the peaks of the sport’s popularity in the mid/late 90s, Sega would’ve capitalized on this.

But for the most part, the license is pretty much non-existent on Sega consoles. Sure, stock car racing can certainly be found on their systems, as we’ve covered in the past, but the actual NASCAR license was only used once on a Sega console, and that game’s what we’re covering today. 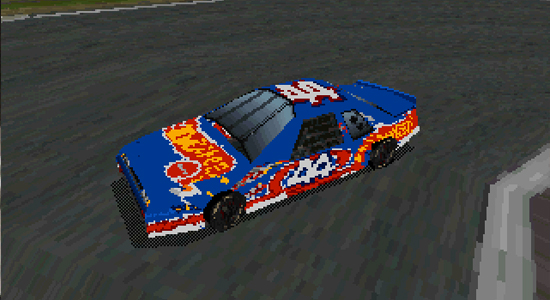 I MISS THIS CAR MORE THAN CERTAIN DEAD RELATIVES.

So, NASCAR ’98 is a bit of a special game for me. It was the first fifth-generation game I’d ever played when I got it with my Playstation for the holidays in ’97, and quite honestly, everything about it blew my 8-year-old mind. “FMVs! Actual music! Three-dimensional graphics! The actual Hot Wheels racecar! This is the greatest thing ever!” was pretty much my reaction.

The first game in EA’s 11 year NASCAR series, it had 24 now-Sprint Cup drivers (which apparently varied between versions, as the box showed cars that weren’t in the PSX copy of the game I owned, or the Saturn ROM used for this review), 17 tracks (12 officially licensed and five fantasy circuits), and a cavalcade of race setup options. It fell somewhere in between simulation and arcade, creating a pretty nice balance between realism and fun. 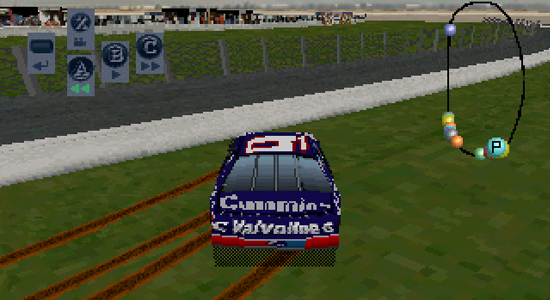 This was cutting edge at one time. Shocking, right?

Graphically, it might not look like much now, but for its time, it was actually pretty amazing looking, or at least I thought it was. While it may look like a garbled and pixelated mess these days, back then it was really pretty cool to see the tracks and cars I’d grown fond of watching every weekend as faithfully recreated as possible. It had a nice, clean interface as well, which is something I really wish more racing games had these days instead of having countless meters and gizmos all over the screen.

The sound was decent enough. The music was quite generic, aside from the game’s apparent theme song, “Flirtin’ With Disaster” by Molly Hatchet (which still gets me to smile whenever it comes on, mainly because of this game.), but the racing sounds were fine, and, again, mind-blowing to me at the time for how real they sounded. As far as commentary goes, it wasn’t bad at all, really only popping up when someone took the lead, and the pre-race bits with the announcer in season mode were well done. (although with the fantasy tracks, you could obviously tell how fake the setups were) A very solid effort for EA’s first attempt at this series.

As for how it played, it was perfectly fine. Not the best thing ever, but certainly not bad for its time. My only complaints back then was how the steering was very… wacky, for lack of a better term. It’d be overly sensitive on road courses, yet not sensitive enough on ovals. This is especially apparent when going back and playing the game now. 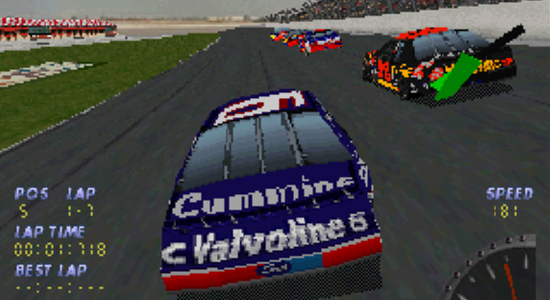 Know what? I miss this old Valvoline car too.

The series went on until 2008, with EA’s final game in the series, NASCAR 09, not exactly being good, at least in my eyes, and with none of the games ever appearing on a Sega console again, due to EA’s dislike for how Sega handled the Saturn. In fact, this was one of the final 5-6 games ever released on a Sega home console by EA. As for the NASCAR license itself, it’s gone pretty much untouched since NASCAR 09, with only iRacing (pretty much World of Warcraft if it were a racing game) and Gran Turismo 5 somewhat featuring the series in their games.

And that brings me to how I feel about it today… And honestly, it disappoints me to say it doesn’t hold up very well at all now, especially compared to other NASCAR games. The weird steering physics just don’t cut it at all after getting used to the stellar physics of Gran Turismo or even NASCAR Thunder 2004 (a PS2 sequel to this game which I hail as the best NASCAR game ever made). And the graphics and FMVs are, to put it bluntly, laughable. It’s amazing how something that stunned me 12 years ago is now a bit of a joke. That’s just how far the industry’s come in such a relatively short time, I guess.

But regardless of how it plays now, it’s always gonna hold a special place in my heart as my first taste of 3D gaming.

And if anything else, I can just turn on paintball mode for some laughs. 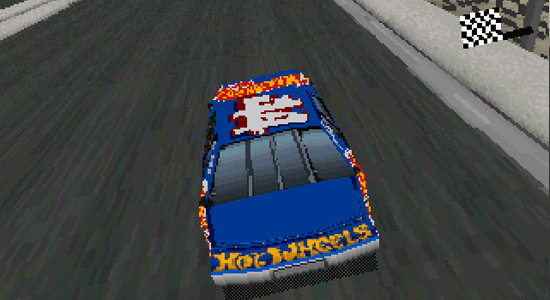 So you’d think that’s where the NASCAR/Sega connection ends, right? Wrong. Note that I called it the only NASCAR Sega console game… There’s one other title with the license that Sega had a hand in, and it’s a bit more influential on a certain Sega franchise than you’d ever expect.

And we’ll be hitting that next week, to bookend the end of the 2010 NASCAR Sprint Cup regular season. Until then, if you’ve got any questions/comments/requests for future articles/etc., just leave a comment here, or hit the official forum thread. See you next week!