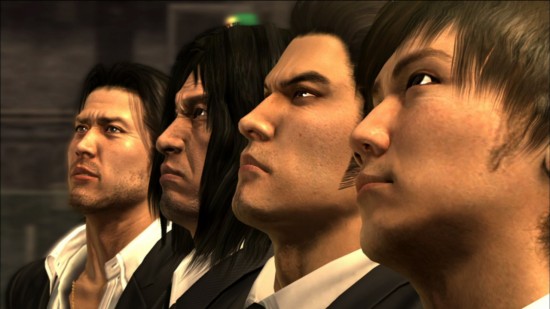 Alright, those of you who know me probably know that I adore the Yakuza series almost to the point of mania. I loved Yakuza 1, Yakuza 2 is one of my favorite PS2 games ever, and I even adored Yakuza 3 despite the cut content and absolutely abysmal box art. Now, I know that a lot of people were a bit sore about Yakuza 3, complaining about the aforementioned content loss, boxart, and even a feeling of staleness. Despite the refinements to the combat and weapon systems, some argued that Kazuma Kiryu was getting a little old, and even that the visuals weren’t at the fidelity that they demanded. Enter Yakuza 4, Sega of America’s redemption. 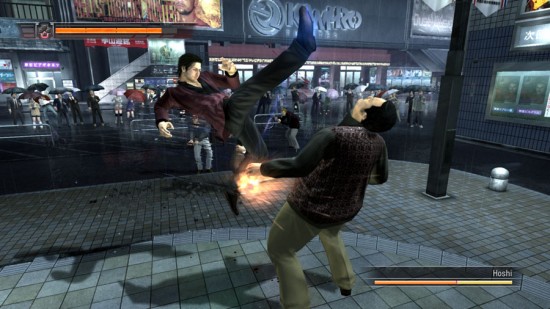 The build that Sega brought to PAX focused entirely on combat and the differences between the four characters. The first character, a Korean loan shark named Syun was a very surprising change of pace from Yakuza‘s very punch-based combat. Syun’s fighting style is very kick based (possibly Tae Kwon Do, based on his heritage), and he’s much quicker than Kiryu ever was. He did seem to take damage more heavily than the other characters, but that’s a more than reasonable tradeoff for his incredibly fast (I can’t stress that enough) and combo-based combat. From the few story details I managed to extract from Sega’s amazing and sexy Aaron Webber (link), I learned that Syun was initially homeless, but after the explosion at the Millennium Tower from the first game’s ending, he managed to pick up enough of the 10 billion yen that flew from the building’s wreckage to start his loan business. However, because that money just so happened to belong to the Kiryu’s Tojo Clan, Syun gets sucked into the story of Yakuza 4. 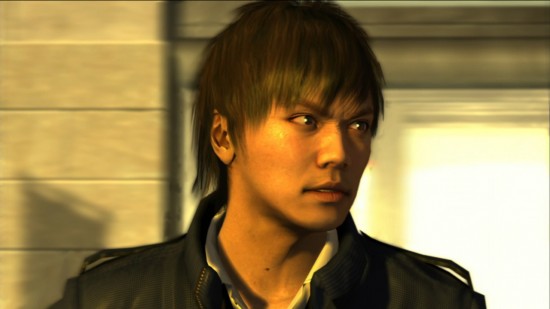 The next character I played was named Masayoshi. He’s a crooked cop. His fighting style was similar to Kiryu’s, but his grab techniques were arm-snappingly expanded. As a person who loves grappling in fighting games, this came as a very pleasant surprise. According to Aaron, Masayoshi also has the ability to handcuff his opponents as a heat move. However, I didn’t really get the chance to do this, because I was enjoying the newly expanded rooftop combat… by which I mean I was throwing fools from the roof every chance I had. Perhaps I should have attempted a handcuffing, but I was quite pleased with myself anyway. 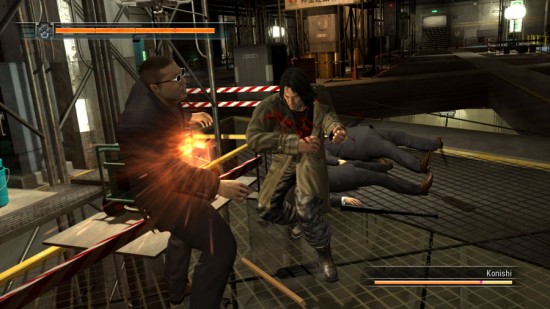 Taiga is an escaped convict who was in jail for killing 13 members of a rival clan in a ramen shop. In its Yakuza 4 related context, that may have been the coolest sentence I’ve ever written. Taiga is a big guy, able to pick up  things Kiryu’s never been able to for use as weapons. This includes the giant oil barrels that happened to be scattered around the warehouse that the demo had me playing in. Another joy was the ability to pick up the fat yakuza whose “unthrowableness” has plagued me since first game. Taiga’s fighting style is incredibly brutal and straightforward, he literally will lift his opponents over his head and throw them to the ground. He is a little slow, but comes as a very refreshing character for those of us who like to play as big guys. 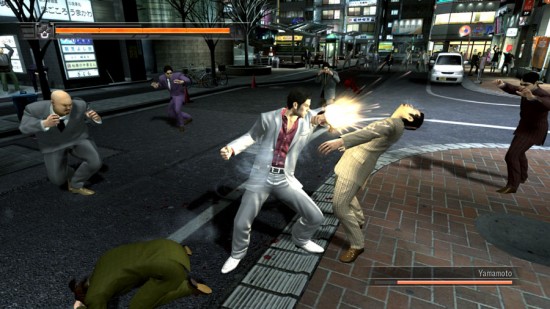 Then, of course, there is Kiryu. Since he plays almost exactly like he used to, I figure I’d use this paragraph to talk about some of the refinements that Yakuza 4 contains. The most brutally obvious is the new facial deformation in the game. Teeth and blood will fly and faces will morph as you punch through the enemies, and it’s a pretty gruesome spectacle. It definitely feels like you’re doing some major damage. The overall visuals have improved as well, and considering that I thought Yakuza 3 looked great, the game is pretty impressive. Heat attacks (which are specials that you can only do when a certain gauge is full, for those of you that haven’t played the series) have become even more ludicrously painful-looking. Also, the only bit of content being cut from the game is a Japanese historical trivia minigame, so all of our beloved mahjongg and host clubs remain intact.

All in all, I am beyond excited for Yakuza 4. The visuals, the combat, and what I gleaned of the story all seem fantastic. The game looks to address all of the complaints I had with 3, and expand the franchise in a really cool way.  I can’t wait to step into Kiryu’s leisure suit yet again. 2011 feels too far away. Also, have you SEEN the new box art? That thing could only be described as “sexy.”