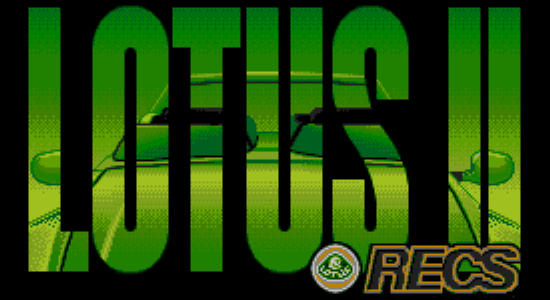 Before I start, I just wanna thank Alex and Co. again for having me on the podcast this week as a cast member. Such a fun experience, and definitely the highlight of a rather downer week here at the MegaDriving lab. You guys rock!

Anyways, back on topic. If you’ve noticed over the last couple editions of this column, the games I’ve chosen haven’t been exactly… Good, to say the least. Virtua Racing was nowhere near the fun racer I remembered it to be, and last week, Super Monaco GP II really disappointed me. So, can we stop this streak of disappointments? Hit the jump to find out…

So, chances are you’ve never heard of this game. Honestly, it was a bit of a chance finding for me, as well. Released in ’92 as the final title in Gremlin and Magnetic Fields’ acclaimed Lotus licensed racing series, Lotus II – RECS (known as Lotus III: The Ultimate Challenge on other systems) tried to blend the gameplay elements of the previous games in the series, as well as throw in a course creator for good measure.

With a seemingly infinite number of track possibilities, and three Lotus machines (the Espirit, Élan, and M200 Concept) at your disposal, it seemed like a delicious mix on paper. But what about in practice? 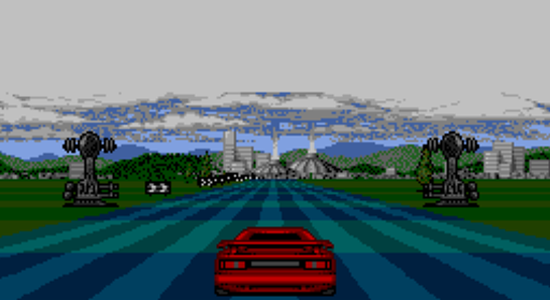 The future: Not just accessible by DeLoreans or the TARDIS.

Graphically, it looked really good. The cars were represented well, and the locales (13 of em, to be exact, including a city at night, the beach, and even a planet in the future [pictured above, which my inner Doctor Who fanboy requires me to call “Gallifrace”].) were all greatly detailed and colorful. The framerate was also quite smooth, despite all the detail, number of cars, and the various little effects on some of the tracks (such as tumbleweeds and other debris). The GUI was simple and clean, as well, which is something I rather miss in racing, no, nearly any genre, games these days. In short, it wasn’t the BEST LOOKING THING, EVAAAAAR, but it was still very visually pleasing.

The sound was hit and miss. The four musical selections were very good, and are generally beloved by fans of the game. Personally, I always thought the main menu theme (track 4 on the OutRun inspired pre-race radio tuner) was one of the cooler 16-bit songs I’d heard. However, on that other side, the car sounds (which you could only hear if you had the radio turned off, for some reason) were very uninspired. Even the NPC vehicles in OutRun sounded better! I really can’t see how they’d get the music OHHHHH SO RIGHT yet botch something as simple as an engine sound. (And if you need proof, here ya go.) Given the choice, yeah, I’d go with music over that any day.

As for the titular RECS track creation system, it’s not so much a creator as it is a generator. You put in your preferences (the amount of curves, length of the track, strength of the AI, hazards, etc…) and it comes up with something for you automatically, based on those preferences. Some were rather bummed about this, hoping for an actual trackmaker, but as for me, I liked it better than a trackmaker, since I’m rather bad at working them. Your mileage may vary, of course. (I swear, that’s just a shoutout to TVTropes, not a bad pun.)

Most importantly, though, it played quite well, blending in simulation aspects like pitstops with the arcadey racing physics. Those expecting this to play anything like Gran Turismo might be disappointed, as it has a more drifty, arcade style. The cars don’t really drive differently enough to make a difference, either, and the AI opponents always choose the same car you do, so car choice is basically an aesthetic thing. It’s hard to really find any glaring flaws in the system, though, at least through my eyes. 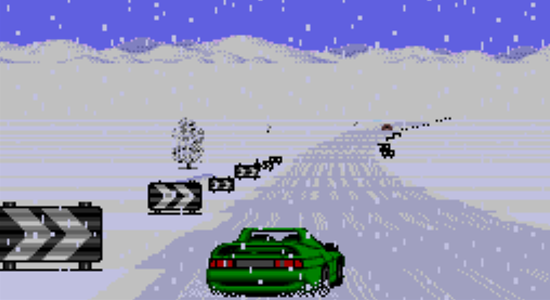 See? Driving on ice in a Lotus was around waaaaay before Gran Turismo 4 did it!

And that brings me to my thoughts on the game today. And just like Hydro Thunder a couple weeks ago, replaying this game now, since I’m much better at racers than I was last time I played the game, has caused me to like it better than I did as a kid. Sure, it has a few minor problems now, but I can easily overlook them, because overall, it’s a great little timewaster game. And now that I understand the track creation system better, I can really dig into that and see how many different combos I can make, which definitely makes things more interesting.

As for remakes or reboots, considering that, aside from EA, who did the Genesis port, the companies that published and developed the games are now defunct, and given that licensed driving titles have now become a thing of bargain bins, I’d say there’s no way it happens. Stranger things have happened, naturally, but aside from an unlikely virtual console release, I’d say it stays a thing of the past. A damn shame if you ask me, because this game deserves a bit better than that.

I’d definitely rank it in my top ten favorite 2D racers list. If you get the chance, do give it a try. 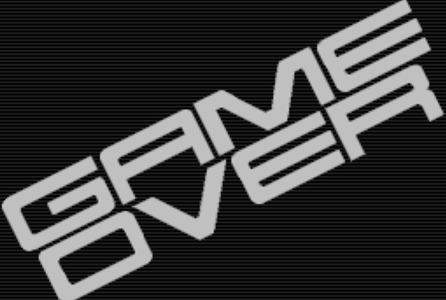 And there ya have it. The streak is broken! Feels good to end on a slightly positive note, doesn’t it? Anyways, if you’ve got anything to say, don’t hesitate to say it here in the comments (which if you do, you’ll have a chance to win a copy of Road Rash 2!), or post in the official forum thread. Thanks for reading!