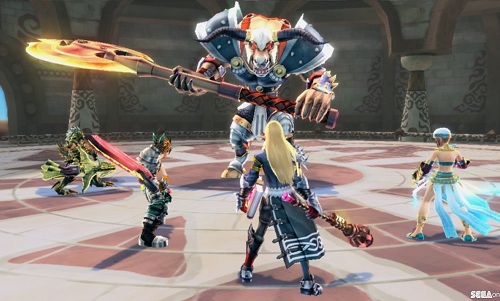 Man I wish travelling was either affordable or instantaneous. With PAX, TGS and JAMMA in just two weeks of each other, it’s unsurprising that something gets lost somewhere in the giant press machine of the internet.

Luckily, Arcade Heroes have created a huge round-up post of all the major news (including screenshots and video) from Namco, Taito and of course Sega. They were once again showing off the ‘Final Showdown’ version of Virtua Fighter 5, but much more excitingly was the reveal of Border Break 2.0, Sega’s arcade competitive third person mech-based shooter. A game whose original iteration I still have never seen in real life, and the latest footage makes me hate that fact a little bit more each day. The esoteric excellence continues with the more lesser known titles appearing to be the most crowd-pleasing, such as Shining Force Cross Raid (pictured above) which is the expansion to the original four-player arcade dungeon crawler. Think an arcade-style Phantasy Star Online and you might not be too far off. Initial D Arcade Stage6AA was I think the last of the high-profile titles, but I’m not too familiar with the series to say much more than that. Looks pretty though.

All in all it’s a surprisingly good smattering of games, and especially in regards to SFCR and Border Break I would love to see console ports of them eventually. The 360 audience I doubt would ever turn down a new fast-paced multi player deathmatch, and with the relative success of modern day beat’em ups like Scott Pilgrim and Castle Crashers I could see a market for a much more complex experience in a similar vein. Worst case scenario, at least -someone- can look forward to playing these in the near future. Even if they aren’t us. Dammit…

Check out this infographic on Sega's arcade racing history