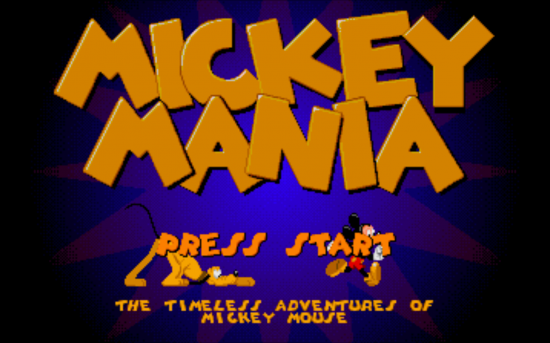 Warren Spector’s Epic Mickey is nigh upon us and I could not be more giddy. Being an enormous animation geek I can’t get enough of classic Disney but Epic Mickey means so much more than that to me. If this new game is any good, and it looks fantastic, it will harken back to the days of yore when companies like Capcom, Shiny and Treasure made games based on Disney properties that weren’t crap. If a game comes out based on an animated movie or TV show today, gamers instantly cringe. As much as I love, say, Adventure Time or Flapjack, I’d probably stay a mile away from any game based on them. I hope that with Epic Mickey developers will look at licensed games with a more serious eye like they used to.

With all that in mind, I started to think about the licensed games that I loved in the 8 and 16-bit eras and which of them may have informed the development of Epic Mickey. A few like World of Illusion, Chip and Dale and Duck Tales all leapt to mind but one stuck more than any of them, Mickey Mania. The first game that David Jaffe worked on and with Michael Giacchino, it was released on the Genesis, SNES, SEGA CD and later ported to the PS1 in Europe. Today I will be focusing on the Genesis version.

Mickey must traverse through side side-scrolling levels based on many different animated Disney shorts from 1928 to 1990. As I said, I am a huge animation geek so this to me this is the best part of the game. I will also include each of the original shorts at the end of this article. Now onto the game.

The attention to detail in the environments and character animations is astounding. Very few 16-bit games had as many contextual animations for a character as Mickey Mania. For instance, depending on how quickly Mickey is moving down a steep ledge effects his movements. He can be either walking like he’s actually on a slope with his toes pointed and his arms pinwheeling or sliding down it on the soles of his feet. And when walking slowly back up the slope, Mickey will stick out his tongue and get a determined look on his face. 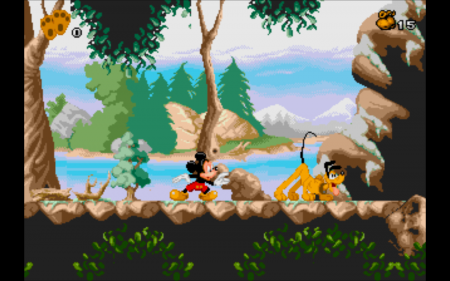 Just the way he moves in general is gorgeous to look at. The squash and stretching of the character while running or falling really flesh out Mickey as a living breathing main character. And the animators managed to hide some little easter eggs like when Mickey ducks it looks like he’s wearing a Mickey eared hat if you pause it just right. And he styles of the classic animated shorts are recreated perfectly in all Mickey Mania’s 16-bit pixel-y glory.

The controls are as fluid as the animation. You rarely feel like a death was anyone’s fault but your own. Often in 8 and 16-bit games where crap is flying at you all the time, the player will feel like a stray ember from a fireplace or bone that’s been blown from a skeleton will hurt them even though it seemed miles away. In Mickey Mania, the hit detection is great. Many times in the game, something will whiz by Mickey and dodging it will make you feel like Neo. When a skeleton explodes, it will litter bones across the screen and you really need to maneuver your way in between them. This adds a layer of suspense to a section of the game that could have just been normal platforming.

That is, unless you’re trying to interact with a 3D object. There are a lot of impressive 3D effects in the game like moving platforms and a Crash Bandicoot-style moose chase, but being somewhat ahead of its time the game gets a little too big for its britches. Coming into contact with most 3D objects in the game is just frustrating and can drain your lives in a game where continues are few and precious. 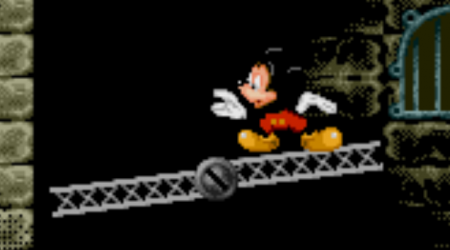 One particular jumping puzzle is sort of run of the mill for platformers but becomes infinitely more difficult when you’re constantly falling through the tilting platforms that just must jump between. If it’s turning, running across the platforms is impossible. Mickey has to be constantly jumping to even make it through and even with that tactic, most of the sequence is left up to chance.

The game also has some trouble with timing environmental obstacles for some reason. Things like how two boulders will fall or when certain enemies appear in sequence can mess up your timing big time. It’s obvious when two falling objects are supposed to come one after the other so you’re able to run across but sometimes they’ll fall at the same time or in the wrong order making it impossible to get by without taking damage. When you’re doing the level over and over because of the difficulty and Game Overs making you restart the whole game you’ll see the change. It seemed like every time I restarted the level things changed. 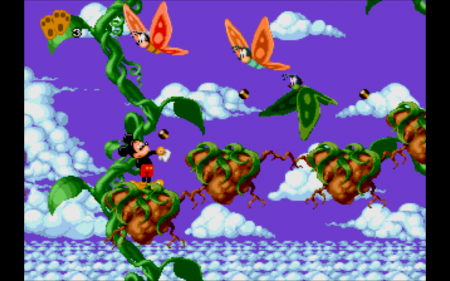 The difficulty on the whole is odd. At some points it seems like David Jaffe or whomever was in charge of it wanted to set the game apart from Disney games geared toward children of the past that it just comes off as mean. There’s one instance where during a boss battle with a spider, she starts chasing you in your usual inescapable wall-boss fare. A few seconds into the chase there’s a ladybug on the ground. Everything up until this point has trained you to avoid mean looking animals of unusual size, so naturally I jumped over it. The ladybug jets off ahead and causes no damage. I thought nothing of this with the clipping problems the game had. There were items on the ground so I KNEW that I was doing the right thing.

The boss runs much faster than you and is a one hit kill. I must have done this fight 10 times before I realized you were supposed to ride the bug to the end of the level. The angry look on his face and items on the ground were all a ruse. If you think for a few seconds, this is kinda cool but if you think about it TOO hard then it’s just the game being an asshole. It’s like the kid on the playground telling you he’ll hit you if you don’t eat dirt then after you do it, he hits you anyway. And this was on the easy mode. 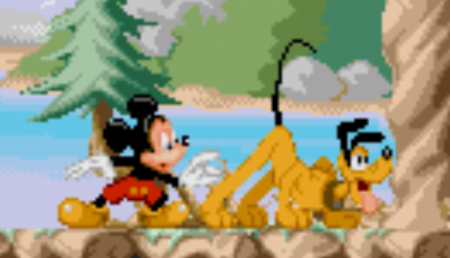 Even with the intense difficulty, replaying sections over and over doesn’t seem like such a chore with the pretty visuals and gameplay that’s constantly doing interesting things to seem fresh. In the level based on Mickey’s 1931 short The Moose Hunt, Pluto accompanies you in a way that I’ve never really seen implemented in a 16-bit game. The level plays out like an escort mission only it’s you that’s being escorted. Through the level you have to constantly be paying attention to Pluto as he tells you what’s about to happen. If a boulder or broken tree limb is about to fall, he’ll stop to warn you. When a moose is about to barrel onto the screen and smoosh Mickey, Pluto will spin around and point in the direction it’s about to come from. It’s a fascinating example of early NPC AI.

Though travelling through time and meeting other Mickey’s is cool, the game has almost no semblance of a plot. Some cutscenes would be nice but the game seems to just move from level to level with a text card in between each stage moving what little there is of a story along. We don’t know why or how Mickey is hopping through his past or to what goal other than presumably returning home. Upon further meditation on this I came to the most logical realization: Mickey is a Timelord.

Obviously, just as the Doctor has met and gone on adventures with his past selves, Mickey is doing the same in Mickey Mania. Each of the Mickey’s you meet looks almost completely different, some in eccentric attire and others dressed to blend in with the time period. Pluto is his companion and I assume Mickey’s TARDIS is Steamboat Willie’s boat. 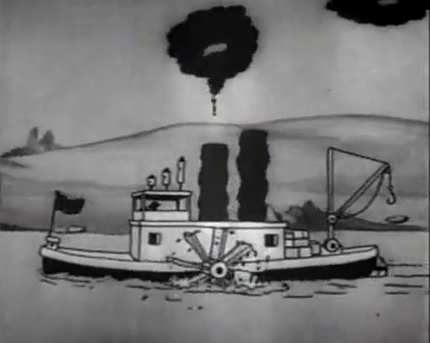 Even though it can get shit-hard, Mickey Mania has a lot going for it. It’s a beautiful game and has lots of fanservice for animation geeks like me. Check it out if you’re excited for Epic Mickey. Here’s to a new age of great Disney games. Please make a game based on The Life and Times of Scrooge McDuck, Mr. Spector. PLEASE!

And as promised, here are the shorts that were adapted into the game. Watch them! They’re all great!

This is actually just part one. Mickey and the Beanstalk is 30 minutes long and was included in the feature Fun and Fancy Free. Check out the other two parts here and here.

Same deal. Parts two and three can be found here and here.