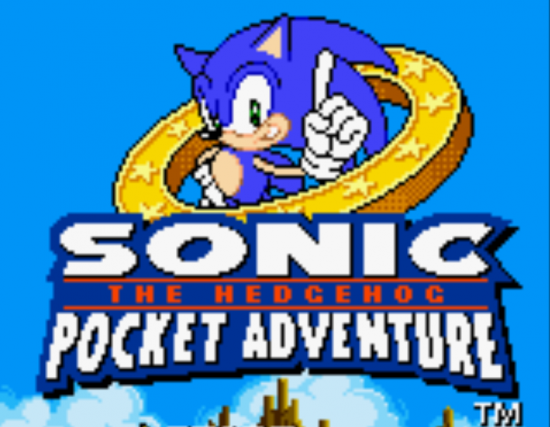 For this review I’d like you all to play along with me. So get out your Neo Geo Pocket Color. What? You don’t own a Neo Geo Pocket Color? But it’s one of the best handheld systems ever! For a console with such a short lifespan, the NGPC had a fantastic library of games, much like the Dreamcast. It even had some games that could connect to the Dreamcast much in the same way a lot of GBA games connected to the Gamecube. One game in the Neo Geo Pocket’s library happened to be the first SEGA licensed game not on a SEGA console and one of my favorite handheld platformers. I’m talking about Sonic Pocket Adventure.

At first, Sonic Pocket Adventure should feel very familiar to you. This is because the game is basically Sonic 2 remixed. With the same levels as Sonic 2 and even missing a couple of them, SPA will feel light but when you really get into the game, you will start to love it. 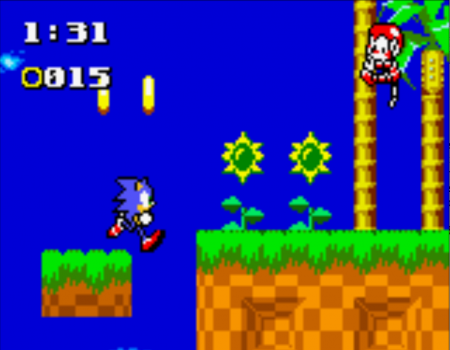 I actually prefer to think of it as a reimagining, rather than a remake. It’s certainly not a port. Really all that’s the same between the two games is each level’s aesthetic. Neo South Island looks just like Emerald Hill Zone and Aquatic Relix looks just like Aquatic Ruin Zone but they play very differently. I’m always an advocate of Sonic being about platforming over speed.

I think Sonic games work better when the levels are built around finding new ways to get through a level rather than just blowing through a stage very quickly. Speed should be the reward for good platforming. When Sonic is moving very fast, that should be an indicator that you’re doing it right. Some games like Sonic Advance 2 lose sight of this. In SA2 you can basically hold right to win. The only real ‘challenge’ are death pits and enemies placed just in the right spot so you’ll run into them with no time to react. In Sonic Pocket Adventure the player really gets a sense of accomplishment from completing levels. 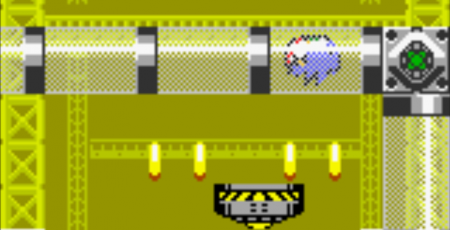 In SPA the levels are built differently than Sonic 2. The Sonic 2 stages are mostly pretty linear with one or two ways to get through it. Sonic Pocket Adventure uses tiered level design to bump the replay-ability and give the game sense of fullness. This is also taken advantage of by hidden items. Throughout the game you’ll pick up puzzle pieces, which get put into the puzzle room in the main menu. You can go into this mode and put the pieces you’ve collected together to reveal an image of one of the Sonic characters and eventually unlock a new level.

Much like any reimagining, the game certainly loses some things in the translation. While Tails is a small part of the game, you can’t have him tag along during your journey. Some of you may see this as a plus but I like having a little sidekick with me. Also, if you’re strictly playing this game for the main game playthrough, it’s pretty short. You can’t blame them for this, though because it IS a handheld game from 1999. We also still get the same bonus stages but the only thing I’ve ever found redeeming about them on the Genesis was the wild 3D graphics. In this game they’re still just annoying. At least Tails isn’t there to eff it up. 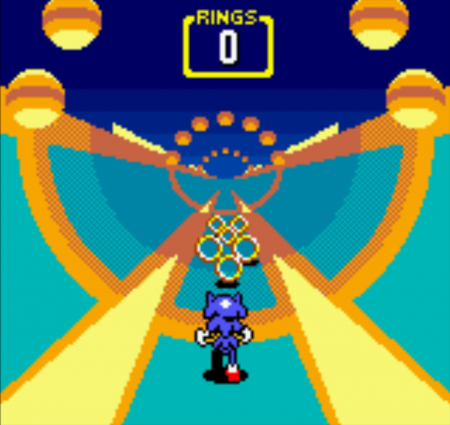 But the game also improves some things from Sonic 2. The cart has battery in it so you can save your progress. Game Overs still apply but they’re much less infuriating when you can pick back up from where you left off. There’s also a level select feature so when it’s time to go back for the chaos emeralds you can just jump around to the levels with them. Sonic Pocket Adventure also manages to take levels and bosses from Sonic 2 that I’ve always hated or didn’t much care for and make them all fun. There’s not a part of this game that I don’t like. Whenever I put Sonic 2 in I can’t stand Chemical Plant Zone but in this game it’s really fun. Even some of the Robotnik fights that have gotten stale are refreshed with a new spin on them.

Two Robotnik fights in particular that stand out to me are from the Secret Plant and Cosmic Casino worlds. Mainly because both of these use inertia in an interesting way and make you feel like you’re in control of the fight. In Secret Plant, Robotnik’s floaty egg thing has two platforms with spikes on their undersides orbiting him. 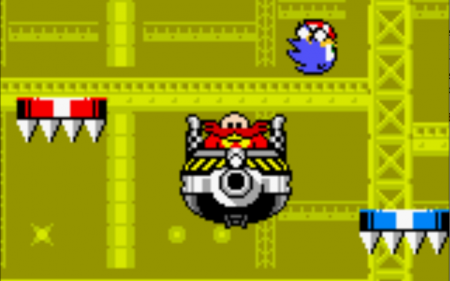 Jumping on one of the platforms will cause it to spin around Robotnik, pushing the other in the same direction. Moving the platforms adds suspense to the fight where you could hit the spikes or get shot by the little blue orbs Robotnik is firing at you and die any second. But since it’s you moving them, it will always feel like you died because of your own actions or won because of your own actions. Winning this fight gives you a real feeling of achievement. Much better than Robotnik just moving back and forth in a pattern waiting for you to jump on him at the right time.

The second fight in Cosmic Casino is one of those parts of the game where they took a segment from Sonic 2 that I can’t stand and made it better. In the Genesis game, Robotnik moves along a stationary line and Sonic has to run back and forth on a half pipe to get the upperhand to jump on him. With the screen moving back and forth and up and down on top of Sonic building up inertia running back and forth on this halfpipe, the fight can feel unwieldy and too luck-based. In SPA the fight is in the same arena but Robotnik’s movement isn’t tethered. Sonic jumping on Robotnik’s egg ship will cause him to fly in the opposite direction and bounce around on the walls. Again, your actions influence the fight. I can’t get enough of this stuff. 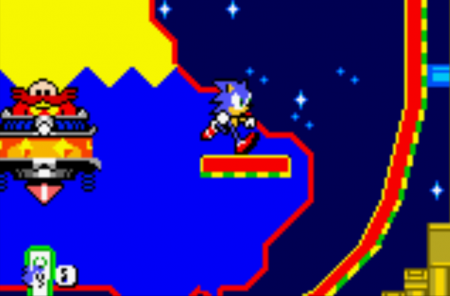 The graphics had to be dumbed down a bit to fit the handheld. Like most of the SNK and Capcom games on the Neo Geo Pocket Color, Sonic Pocket Adventure finds a pretty and pleasant way to accommodate the system’s abilities. It uses the same chibified style as those other games, but since Sonic is already pretty cartoony it’s not as much of a disconnect as Ryu or the guys from Samurai Showdown. It’s actually pretty reminiscent of Sonic’s 8-bit outings on the SEGA Master System. Even with it’s scaled down graphics SPA is a beautiful game that really shows off what the Neo Geo Pocket Color could do.

Like many of the 2D Sonic games SPA has a debug mode. Having beaten the game several times, I thought I’d tool around with it a bit. The debug mode opens up some cheat-y things like a level select and invincibility mode, but also allows you to play as Tails. I don’t know if this was an accident or just haphazardly thrown into the game because it’s kind of buggy and weird. Tails doesn’t fly like in Sonic 2 and 3, it’s purely an aesthetic change. You play as Tails by hitting the B button at any time during gameplay. I use this button as my jump so every time I jumped Sonic would instantly transform into Tails or when I revved up my spin dash he would flicker back and forth between the two characters. This confuses the game sometimes and leads to some funny images like these.

I should also mention the game’s engrish. Neo Geo Pocket Color games were mostly all developed in Japan and whether the cart was released in Japan or the US, it’s the same things. Depending on what language your console is in it will switch the cartridge to display English or Japanese. Because of this, most of the games were localized in Japan and had some goofy translations like the end screen and this. 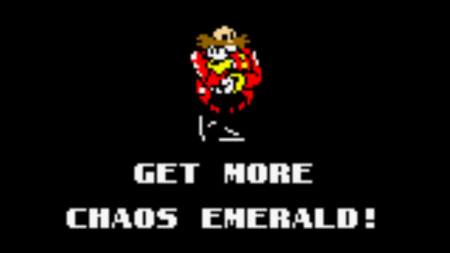 If you’ve never played Sonic Pocket Adventure I highly, highly recommend it. I’d say it’s the best handheld Sonic game we’ve had yet. Hell, I think it’s one of the best Sonic games we’ve had period. Let’s hope Sonic Colors lives up to it. And if you do decide to pick it up, play an original cart on the Neo Geo Pocket Color. The NGPC is a fantastic handheld with a great library. Most of its games can be found for fairly cheap on Ebay or Amazon. It is truly one of the most overlooked gems of our time. Get one, you will not regret it. 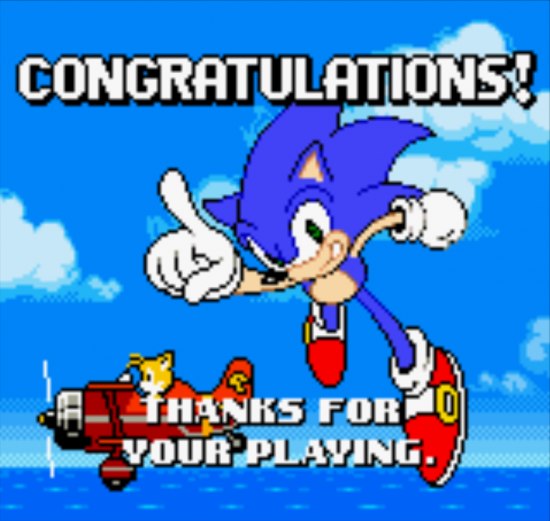