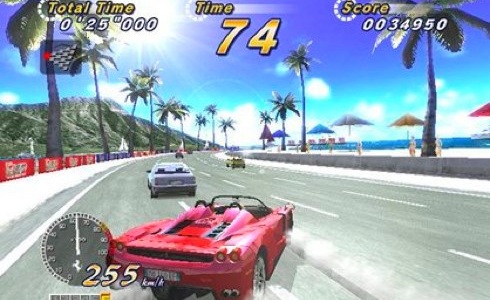 The Ferrari is arguably the centrepiece of Outrun. Either that or the girl along for the ride. However Sega’s contract with Ferrari has recently expired, leaving the digital download version of the game in a rather difficult predicament. In conversation with Eurogamer.net, a Sega spokesperson had this to say;

Due to the expiry of the contract with Ferrari, OutRun Online Arcade will remain offline on PSN but will still be available on XBLA until Dec 2011

I’m actually a little surprised how straight to the point that is. As it stands now, OutRun Online Arcade is confirmed to be removed from the European PSN store at the very least. Variations of Outrun 2 are of course still available on disc for earlier consoles, but as far as I’m aware we could be seeing the last days of OutRun Online Arcade. At least Xbox owners will have an extra year to pick it up, but I guess from December next year you will no longer be able to buy or re-download the game from any console digital distribution service.

It’s been a bad week for Yu Suzuki fans.

AM2 arcade fighters officially coming to the West this week

Review: Scott Pilgrim vs. the World