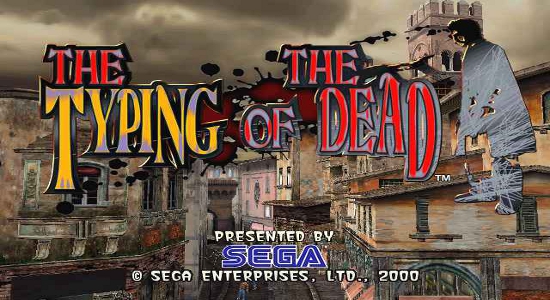 So, I just took a typing test and while I’m still as fast with my fingers as I ever was, I realize that there are some people out there who are completely and utterly comfortable taking as many shortcuts as possible when it comes to typing things out either online, for a blog or within the gentle confines of a word processor. While the use of the letter ‘u’ in place of ‘you’ is usually enough to make me slightly cringe, it does just go on to prove that Sega has a point when they released Typing of the Dead over a decade ago.

I mean, I’m not going to mince words in the least – House of the Dead 2 as well as it’s predecessor are ridiculously difficult in their own right – even when you take it to the undead full-on akimbo, which as far as I’m concerned is the only appropriate way to play that game. And despite the sheer amount of fun to be had going all John Woo on the goddamn monstrosities, there is something deliciously fun about the concept of doing the exact same thing from the confines of a keyboard. 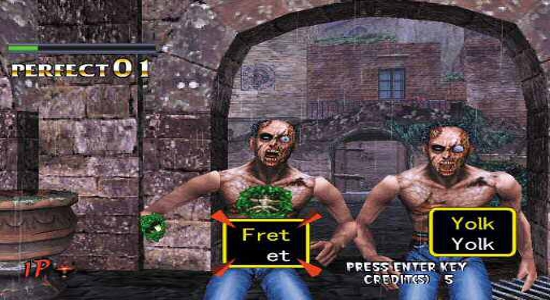 Yes, when you think ‘Zombie Apocalypse’, I doubt with every sincere feeling in my fleshy pink brain meats that the last thing that will come to your mind will be a keyboard, unless it’s to hit a zombie in the head, repeatedly, until that ungodly moaning has stopped once and for all. But, for an era when many of the alternatives would have been nothing more than a snoozefest for even the most resolute of grade-schoolers, Typing of the Dead let you kill zombies simply by being able to be a damn awesome typist.

While that may not have meant something in the earlier years of childhood when kids had concerns like GI Joe, Power Rangers and of course, the opposite sex and the routine cootie shots that usually resulted with any sort of interaction therein, growing up, typing became pretty damn important once the use of a crayon and magic markers became frowned upon in the educational institution you might be attending at the time – unless it was a circus or learning to be a pre-school teacher.

But Typing of the Dead was indeed something incredibly special for the time it was created and to be totally honest, Sega knew they had a winner on their hands – cult classic or not. You see, instead of using the light gun, which is what any self-respecting arcade shooter fan is more than acquainted with, you simply use a keyboard in the comfort of your home, nestled on your couch with your Dreamcast whirling away. So, instead of taking precision shots before running out of ammo and reloading, you have to focus on typing with some modicum of accuracy, otherwise you’re nothing but zombie food. 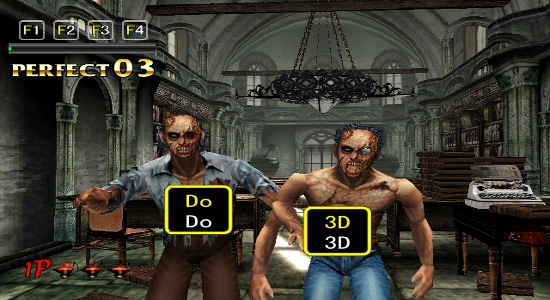 Essentially following the narrative of House of the Dead almost without deviation, anyone looking for something to replace the warm and fuzzies they get from a good light gun game will probably end up hellishly disappointed – not because TotD is a bad game, but because it doesn’t necessarily deliver what light gun junkies are looking for. Typing of the Dead is all about being fast, accurate and capable of churning out a complete word, phrase or sentence with a grace under pressure that would make even the most seasoned monster movie heroes sweat a little bit – but that’s only because computers seem to scare the hell out of everyone who can’t type worth a damn.

In addition to the main ‘Original’ and ‘Arcade’ modes, which take typists through the main plotline on through the end, typing the hell out of their keyboards to make it to the next mission and survive, the developers decided to mix it up to allow the game to fill the niche role it seemed designed to do from the get go. Modes like ‘Boss’, ‘Drill’ and ‘Tutorial’ are enough for even the most rookie keyboard jockeys to get their bearings and keep their teeth sunk in well after they’ve mastered how to use a QWERTY keyboard to their hearts content. But, needless to say, Typing of the Dead has definitely outlasted any of the earlier, crappier typing programs for the sheer fact that it is engrossing enough to pull people in and more than enough to teach you to type pretty quick.

Why? Because there’s nothing more terrifying than a zombie bearing down on you with nothing more than the simple intent of sampling you delicious fingers if you’re too slow to type out a few simple words. Obviously, as the game goes on it gets a bit challenging, usually culminating in a boss battle, but would it realistically be a fun game without also being a challenge? Probably not. And if the fact that it’s a typing game with zombies and boss battles is enough for you then please, be my guest and go back to Mavis Beacon. 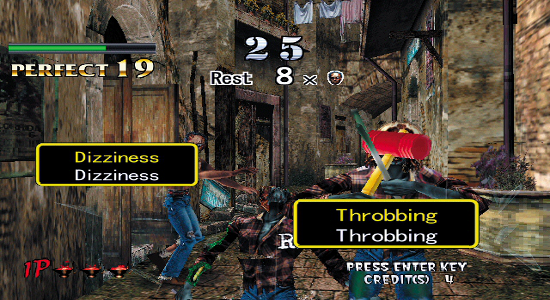 Unfortunately, while Japan actually got arcade cabinets with keyboards attached to them, I was never fortunate enough growing up to see anything similar in the United States. But, I was lucky enough to get my hands on a copy when it actually hit North America early in 2001 and eventually picked up the PC port for the sole reason of actually playing through it again and seeing if I was as rusty as I thought I might be. Yes, you just read that correctly, I bought a typing game about zombies twice for the sole purpose of playing through it more than once.

For those who may not be in the know, the game actually made it to the Playstation 2 in the form of The Typing of the Dead: Zombie Panic, but this was sadly exclusively to the great nation of the Rising Sun and arrived in Japan in 2004 complete with a USB keyboard. Additionally, the game hit GameTap in 2007 for the PC junkies in the crowd who still wanted to get their typing slaughter of the undead on. But, even that should have proven the demand for a sequel and thankfully enough there was.

In the same year, Typing of the Dead II released in arcades and was actually a typing revision of the light gun House of the Dead III and to this date has only been released in Japan – at least the last time I checked – if this would only change, I would be pretty happy since I have a Gameworks right around the corner. You’re listening, right Sega? After all, you released English of the Dead which was expressly designed for the Nintendo DS to teach people a language. A language. If you can pull that one off, a few arcade machines to your chain of arcade-bar-eateries won’t kill you, or cause you to come back from the dead to devour our supple pink outside or delicious innards. 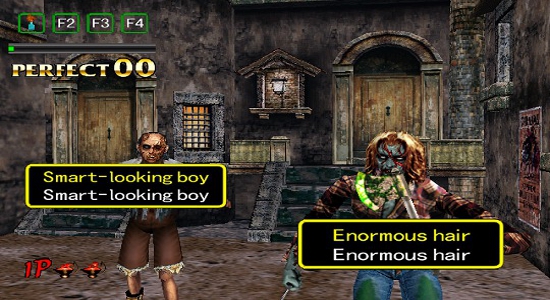 Either way, if you’ve never had a go with Typing of the Dead, I really can’t say enough good things about it because you’re really missing out on something awesome. Whether you learned to type thanks to that girlfriend from Canada you met in a random chat room on Yahoo or by sitting through endless amount of computer applications classes for the easy grade, Typing of the Dead will not only keep you sharp on typing, it actually makes you a bit more limber with your fingers – and with Halloween – and all the parties that go with that coming up, I really can’t find any potential downside to playing this game.