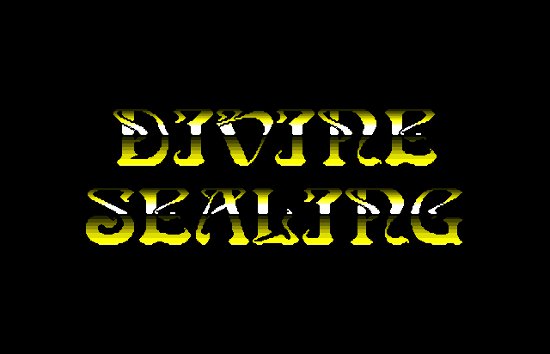 Wow, what a title screen.

Get excited for this one, Sega-addicts; Divine Sealing is an unlicensed game. Is it a game so bad that Sega deemed it unsellable? No, actually it’s pornographic. Coincidentally, it is also quite bad, so I’m going to tear it apart. I’m also going to keep it safe for work, so feel free to read this in public, or around children. If you want to see boobies, you’re going to need to play the game, or just do a quick Google search. Read on to find out how pretending that you’re playing a game while clicking a “search” button is more enjoyable than playing this game.

Usually terrible games are accompanied by terrible stories. Unfortunately, this game was only ever released in Japan, so I have no clue what the story is. All I know is that some girl talks to you, you have to go kill things with your ship, and then she gets naked. I hate to judge a game based on broad assumptions, but I see no possible way that they could tie those 3 things together to create a non-trivial narrative. There are a lot of pages of Japanese text, and I mean a lot, so I guess it’s possible, but I doubt it. To me it seems pointless to even have a narrative, or gameplay for that matter. Why can’t you just look at naked anime girls? I guess because you like a challenge. Or, you have no interest in seeing anime girls and you actually want to see if this game is worth playing. Well hey, I can tell you for sure that it isn’t! 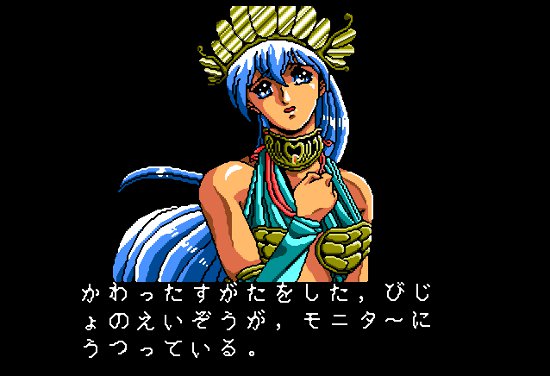 Don't worry, this is before you strip her down.

Basically this game is a bare-bones space shoot-‘em-up. It’s pretty obvious the gameplay was tacked on so they had something other than text and pixelated nipples to sell. There are no power-ups to collect, no way to bomb, nothing to keep you playing except the promise of boobs. There are also only 5 levels, apparently. I’m never going to know for sure because the difficulty curve in this game is like hitting a brick wall. Level 4 is impossible; there are far too many things coming at you at once, and the background makes it impossible to see. The only way to power-up is to get 10000 points which is essentially equivalent to killing 100 enemies, but it’s extremely easy to die, as one bullet or encounter with an enemy kills you. The collision detection seems off, so sometimes things appear to hit you, but you don’t die. Basically, this game does whatever the hell it wants and you get to deal with it. Or you can stop playing. 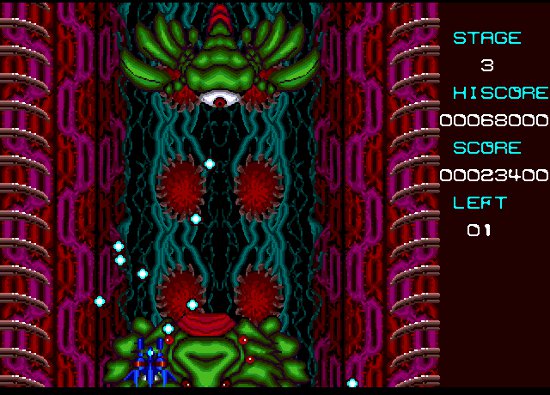 This is going to be weird, but the pictures you get to see when you beat a level aren’t even particularly appealing. The girls look scared, as if you’re forcing them into it, and there is very little…realism to the…attributes. Try to imagine this so I don’t have to spell it out and end up with some very strange trackbacks. Essentially, you’re forcing a cartoon that is obviously a cartoon into stripping for you, after you shot up a bunch of stuff that doesn’t really look like anything. Unless you’re a seriously perverted individual, I guarantee that you will not enjoy a minute of this game.

The soundtrack is actually not bad, but it’s impossible to enjoy because of the terrible sound effects. Since everything takes two shots to kill it also takes 2 sound effects to piss you off. The first one tells you that you hit the thing and sounds a little like throwing a marble against a sheet of metal, the second is a standard explosion sound, but it sounds slightly more stupid compared to an explosion from Gradius, or a game that I care about. Every once in a while for no particular reason there’s a sound that sounds like the Pac-Man noise, except more WOPPA than WOCKA. The cacophony that results from this inspires the mildest of men to become serial killers. I killed a man after playing this game. Sure, it was my roommate and I did it because he ate the burger I was going to eat for lunch, but still, usually I just beat him within an inch of his life. You did this, Divine Sealing.

The visuals aren’t much better than the sound. Often because of the mess of the background it’s very hard to see the enemies and their bullets. In level 1 the attempt at creating water results in a seizure inducing jumble of blue lines. In level 3 the normal background, which was actually not bad, cuts off into something that should not exist, and then gets covered by diagonal white lines that render bullets invisible. In level 4, it’s like level 1, except this time it’s lava. Also, what the hell are half of the enemies supposed to be? 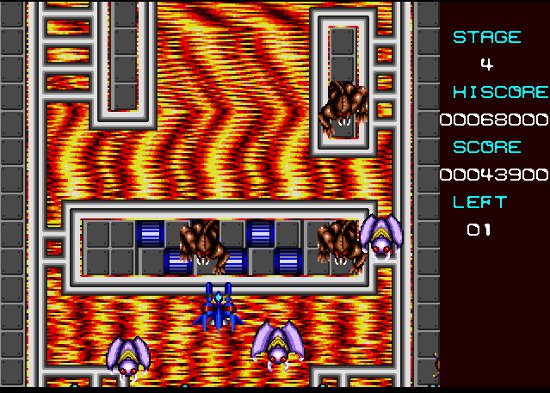 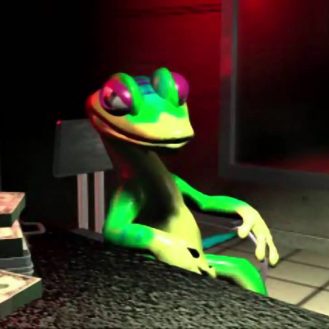