Phantasy Star Portable 2 is a confusing game for me to review. On one hand the game packs an amazing amount of content onto a tiny UMD disc. There is so much to do in this game beyond the main quest it is ridiculous. The visuals are also gorgeous to look at and I’ve had many people watching over my shoulder who almost convinced themselves to purchase a PSP just from seeing this game alone. Unfortunately, there’s something missing from the experience that kept it from being as memorable as earlier Phantasy Star Online games. It’s the same problem the original Phantasy Star Universe had, and while Phantasy Star Portable 2 has improved on many of its predecessors faults it still doesn’t live up to what it’s big brother accomplished many years ago.

The weird thing is that many of the advancements that Portable 2 makes sound like good decisions but end up making the gameplay less endearing. The addition of dodge and block buttons sounds like a reasonable idea but the simplicity of combat in the original games is what made them so compelling. All you had to think about was either manually moving away from an enemy or keeping the rhythm of your button presses steady to continue your combo. Adding in the defense buttons takes away from that mesmerizing flow and I could never get into using them properly. Yes, you could just completely avoid using them for your entire playthrough but that doesn’t really work as some bosses and enemies have moves that pretty much require some sort of defensive effort to not get destroyed.

While we’re on the topic of the controls and combat system, the button layout can be a little frustrating. To switch your equipped weapons/armor or use an item you must hold down the circle button while navigating through the menus with the d-pad. It works okay during some of the easier dungeons but when you get in stressful situations and need to use a monomate (healing potion) quickly you’re probably going to die. Even if you’re flawless with your button presses and navigation of the menus it’s often going to take too much time to get to the monomate and heal yourself. I remember simpler times when I could map a single button press to using an item to heal. Oh, how I miss those days of my youth. 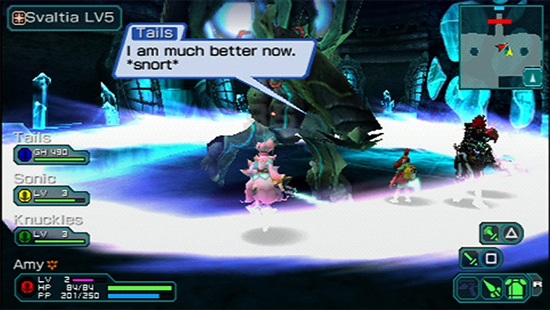 Another problem I noticed while playing through the single player campaign is an almost non-existent sense of progression. I played for over 30 hours and changed my weapon and armor maybe a couple times and those were purchased at a shop. I can’t remember once keeping an item I found while on a mission. I don’t expect to find something new every time I go out exploring as part of the excitement comes from when you do actually find something worthwhile. I just wish it happened a little more often.

Now, after I’ve made you think that this game is truly horrible let’s discuss the good. For one, Portable 2 plays almost like a “Best of” compilation for the Phantasy Star Online/Universe series. In many of the story and side missions you’ll see familiar sights that are actually quite fun to see again. An entire quest section is devoted to playing areas from past games as it is a “Virtual Reality Simulator” thus allowing you to replay areas from the past without messing with the canon. One of my favorites was actually revisiting the Forest form the original PSO. It’s not exactly the same dungeon but the overall look and selection of enemies is the same. 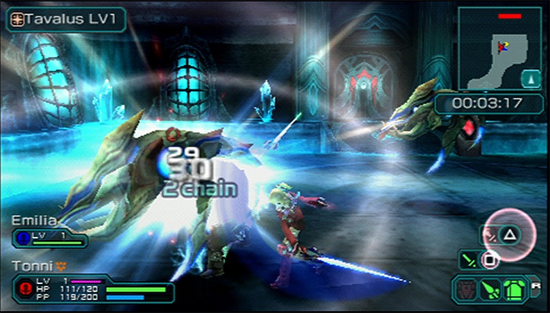 The fact that Portable 2 rehashes so many things from past games can be seen in a negative light as well. If you’re someone who’s played everything in the series you’re probably not going to feel that there’s much new content here. Many of the bosses feel very similar to past bosses and the overall game really isn’t that new. It’s probably an opinion that will be split by many fans as there are always the fans who don’t want their series to change but then some people may feel let down by how similar the game is to those in the past. For me personally, I enjoyed the familiarity but at about the halfway point I was starting to get a little bored.

The fact that I was getting bored is my main problem with the game and it goes back to many of the reasons I’ve discussed above. I felt no compelling reason to continue on after about the halfway mark and it’s not just because I wasn’t interested in the forgettable story. In fact, I’ve never finished a PSO game for the story as in the early games it was almost non-existent and PSU’s was… well… there was Ethan Waber. Really the main reason I was so involved with the past games is that after every mission or dungeon I felt like my character was improving. I might not beat a mission for several tries but after each failure I may have leveled up, found a new weapon or armor, improved my mag, found or leveled up a spell, etc. I’d also notice that the next time I tried the mission I’d get a little further. I never got that feeling with Portable 2 and often the missions were easy to beat on the first attempt or I’d die for reasons beyond my control, i.e. not getting to the monomate button in time or a final boss who can kill you with one nearly unstoppable attack. 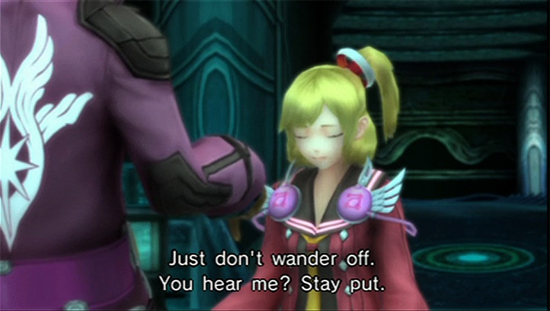 Before I completely destroy your opinion of Phantasy Star Portable 2 remember that I am only reviewing the single player campaign. There’s a lot of players out there who, like me, enjoy playing most of the PSO/PSU games completely offline and I wanted to review the game from that perspective. Below you’ll find Kris Knigge’s review of the multiplayer portion and his thoughts on the game may be completely different. As a single player experience I found Portable 2 to be lacking and I can’t really recommend it especially if you’ve played earlier PSU games and didn’t enjoy them. My best recommendation is to try the demo, imagine playing that for 30 more hours and then decide whether purchasing the full game would be in your best interest. 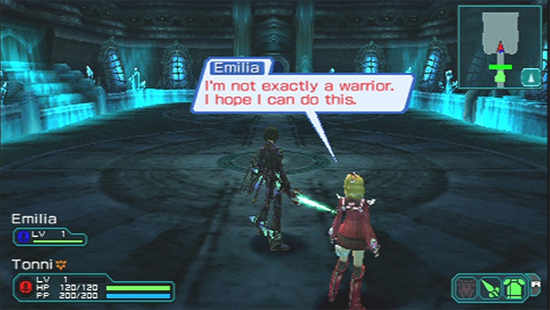 Everything Alex said above is valid. PSP2’s gameplay is not as precise and engrossing as PSO series, some of the bosses are cheap, and the story isn’t brilliant.

That said, taking the game online seems to obliterate a number of these shortcomings.

For instance, the combat becomes a lot more fun when you’re playing with a number of intelligent players. As opposed to building up damage-multiplying chains only to have an AI waste it on a weak special attack (here known as Photon Arts), you’re working with people who call out a desired chain number to work towards before one of you delivers a devastating (and generally visually spectacular) killing blow.  Got a much weaker player in your party? Have them stand back, build chains, and get more experience! This is also a helpful way to build levels quickly early on. Just be smart about it, or else you might draw some ire from your teammates. 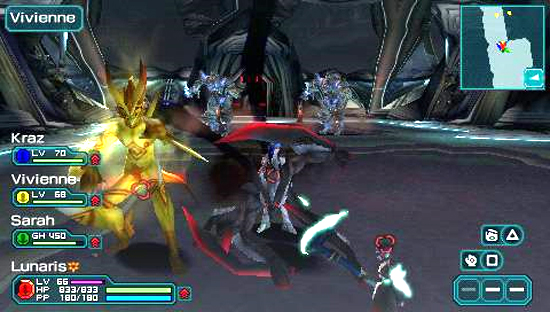 Speaking of teammates, the people watching in PSP2 is a ton of fun. Sure, you’ll find garishly outfitted people in any MMO, but watching an elfish Newman with translucent angel wings and the Excalibur from Fate/Stay Night fighting alongside a seven-foot tall robot in a bizarre frog suit and a 4-foot tall Beast-woman dressed as Hatsune Miku is one of the more interesting experiences you’ll have in gaming all year. The friend system, revolving around exchanging “guild cards,” is very well implemented, and it’s easy to find your friends online.

Now, you can do simple quests online, and that’s a lot of fun, but some players will probably spend most of their time in Challenge or Battle mode.  Challenge mode drops everybody to level one and standardizes their equipment. Everyone is given a single Scape Doll (essentially an extra life), and they have to work together to fight through a series of difficult enemies and puzzles.  It’s an insane crash course in dodge-rolling, chaining, and blocking. On top of all of this, C-mode is a time trial. Cooperation is VITAL to survival, and this is where the game’s glaring omission of voice chat begins to hurt. Unless you’ve already set appropriate phrases for a particular map (which is incredibly unlikely), the inability to discuss traps and ask for help on the fly is frustrating, as navigating through menus of preset messages just doesn’t work fast enough. If you can get some friends on Skype or find a PSP2 vent, you should be fine, but it would have been great to get a voice chat option in the game itself. 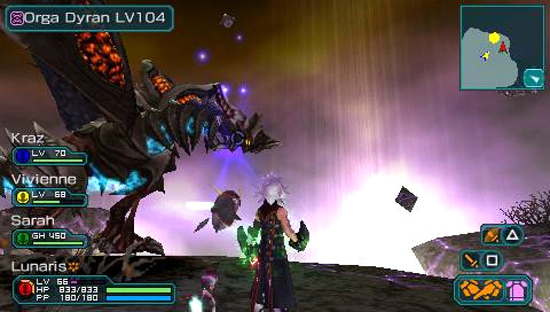 Battle mode is an entirely different animal. It takes the basic mechanics of regular PSP2 and makes them competitive and crazy. This mode also uses equalized levels, but it has players going through a number of strange battles. One mode is all about having the most cash: kill someone and they drop half of their Meseta, which can be picked up from all around the battlefield. Sometimes, you’ll be capturing territories, launching off of springboards, or simply trying to race your opponent through a map. The more battles you play, the more game types become available to you.  It’s a ludicrously fun take on traditional MMO PvP, and surprisingly addictive. 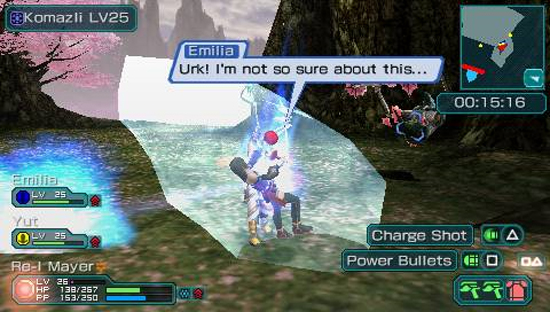 PSP2 is already a huge game, but the online play allows you to get even more out of it. I haven’t even mentioned the fun of simply visiting other peoples’ in-game rooms or putting a parrot in your friend’s room and teaching it to say “moo” (thanks a lot, Aaron Webber!). PSP2 is a portable MMORPG that you can play in ten-minute bursts. It’s surprisingly stable, too, considering that everyone is connected via WiFi. There’s nothing like it on PSP, and it will keep your attention for a long time.

It may not reach the fantastic heights of PSO, and voice chat could have made the online play truly excellent, but PSP2’s online component is still deserving of a B+