Since the release of Sonic Adventure on the Dreamcast, I’ve always been more interested in future 3D Sonic games than any of the 2D ones. Even though the 3D games are usually filled with wasted potential while the 2D games are quite often decent to outstanding games, I still find myself reaching for Sonic & the Black Knight rather than the latest Sonic Rush.

Maybe it’s because I can’t imagine a 2D Sonic game doing anything remarkable that makes them better than the original Genesis games. While the Advance and Rush series have added and updated the gameplay for a newer generation, it’s pretty hard to argue that they’re “better” than the original games. Even Sonic the Hedgehog 4 failed to ignite retro fans’ interest.

As for those 3D games, we’ve never truly received a 3D Sonic game that delivered what it could. Games like Sonic Adventure and Sonic Unleashed both have moments of fantastic and incredibly fun gameplay but fall flat due to horrible design decisions and/or are a buggy mess. How many reviews were there for Unleashed that mentioned how amazing of a game it would have been if they would have just removed the Werehog levels? With Sonic Colors it sounded like SEGA had finally taken the criticism to heart and was creating the 3D Sonic game that fans wanted. I’ll admit I was a little skeptical when booting the game up for the first time but I’m happy to say, this is the Sonic game I’ve been waiting for. 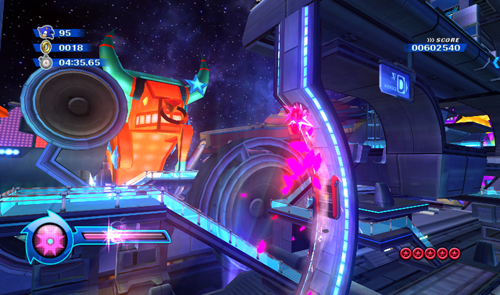 The most important decision Sonic Team made for Sonic Colors was making Sonic the only playable character. Besides the mediocre Sonic & the Secret Rings and Sonic & the Blank Knight Wii games, there’s never been a 3D Sonic game that didn’t force the player to play as another character. Why it took them this long to realize that we didn’t want all those extra characters and gameplay styles is anyone’s guess. Almost all my bad memories from the past games stem from those alternate characters and it really seems like Sonic Team was putting more work into a game just to drag it down. With Sonic Colors they were able to focus all their effort on perfecting Sonic’s controls, level designs, and overall gameplay rather than dividing that time up between two or more other characters. The extra time they were able to spend shows and I wouldn’t be surprised if it’s one of the main reasons for Sonic Colors success.

The gameplay is similar to Sonic Unleashed’s daytime levels. You control Sonic as the camera switches from 3D behind-the-back and 2D from-the-side platformer sections.  Both segments are designed and play very well with the 3D sections being a little more speed and reaction based while the 2D sections are a little slower and more methodical. This isn’t always the case as there are some speedy moments in the 2D segments but you do spend a lot more time in the 2D perspective and that is usually because the gameplay tends to be slower. 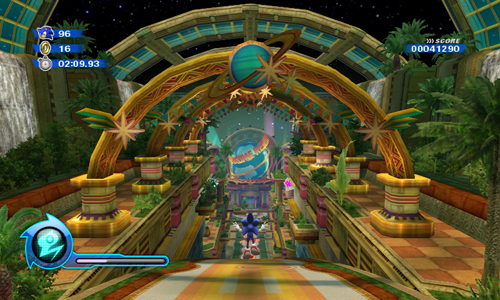 The controls overall work well and are much tighter than any 3D Sonic game before. They do feel a little overly complicated with a total of four buttons being used but once you get a few levels under your belt everything starts to click. I’m not convinced that Sonic Team couldn’t have achieved making the entire game work with just one button used for jumping and the homing attack (a la Sonic 4) but the complicated controls are only a minor complaint in the end. I did play the game using both the Wiimote and the Classic Controller and the Classic/GameCube control scheme is by far the superior way to the play for those who have that option available.

Visually, Sonic Colors is one of the most amazing looking games on the Wii. The amount of detail Sonic Team was able to cram into this game is mesmerizing and I often found my eye wandering the screen looking at all the alternate routes and little items that appeared around the level. It’s a shame that the Wii doesn’t have an HD output option as in HD this game would be hard to tell apart from some of the games you see on both the 360 and PS3. In fact, Sonic Colors is a great piece of evidence in the argument that today’s trend of grey and brown games is not showing off how beautiful HD games can truly be. Yes, Gears of War is an impressive looker but when compared to simpler but more colorful games (Viva Piñata, for example) it looks rather dull. 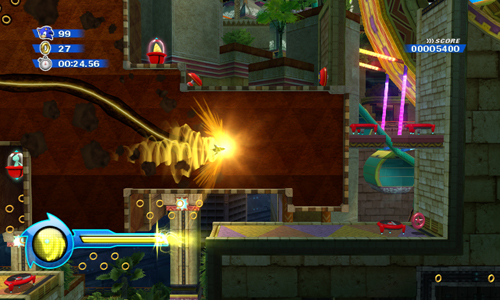 Now, Sonic Colors is not entirely perfect. Besides the overly complicated controls some of the latter levels suffer from some frustrating design choices. Usually, the checkpoint system is set up in an entirely fair and well thought out manner. Unfortunately, this is not always the case as there are several moments where a checkpoint placed closer to a frustrating section would have been appreciated. One of the very last levels, in fact, makes you complete the entire level with no checkpoints. It’s not a long level but it is filled with several difficult areas and ending with a part that is very trial and error. It’s annoying to say the least and was the closest I came to throwing my controller down and taking a break.

Beyond the occasional checkpoint problem there are also a few moments where the game does not give you a good idea of what it wants you to do. Twice I had to consult the youtube gods to figure out how to pass a certain part of a level and I did not get a “God, I should have figured that out” feeling but rather a “How the hell was I supposed to know that?” feeling. I don’t like that feeling and luckily it wasn’t a common thing but when the rest of the game is so well designed and consistent the occasional mistakes tend to stand out a little more. 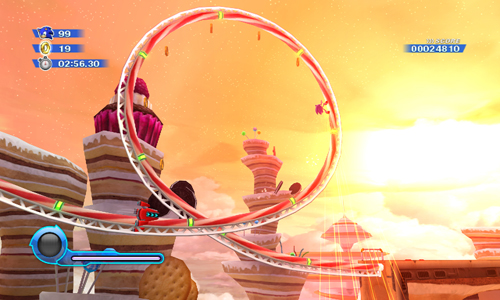 Overall, Sonic Colors shows that after over ten years Sonic Team may have finally figured out a way to make a 3D Sonic game that works. Unleashed was a step in the right direction but was hampered by many poor design decisions and it was everyone’s hope that the next game would fix those mistakes. Luckily, it did and Sonic Colors is hopefully just the beginning of some great Sonic games in the future. This is not a perfect game as the last few areas of the game suffer from some frustrating design choices like cheap deaths and poor checkpoint placement but as an overall package Sonic Colors shines.

Sonic Colors gets a B+. 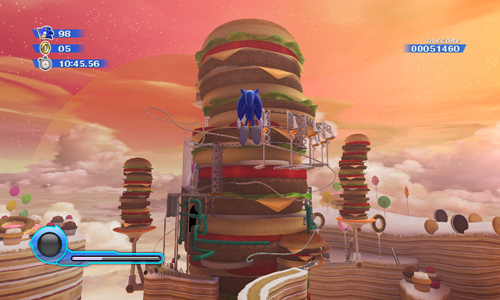 This is the best 3D Sonic game. Granted that isn’t saying much and the game does have a lot of problems, for example, I just can’t get used to the jump. It feels like Sonic is being weighed down and that can be fatal in sections where you have to use precision platforming.

The level design in general is really fun, and the wisps add a great deal of exploration to it. They’re definitely the best gimmicks Sonic Team has thought of in a long time. However, in saying this there is a good deal of cheap deaths and pitfalls which really spoil the game. The last levels are terrible and really frustrating, which, was really sad. It’s a shame because without these problems the game could have been amazing, instead of just great. 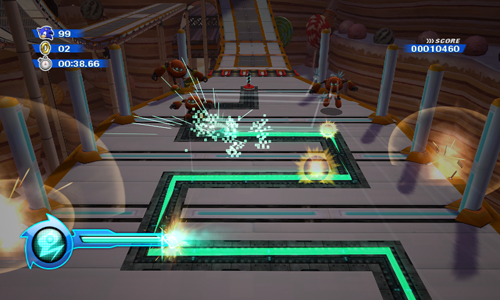 The levels themselves look amazing and I mean it when I say that it’s one of the best looking games I’ve seen since Super Mario Galaxy. Each world looks distinct and colourful and often left me speechless. The music is also great and the game just screams style. You can tell Sonic Team spent a lot of time making this look good as there is a lot of production value behind it.

All of this adds up to a great experience and this mini-review was just to tell you cynical people (like me) that if you’ve been disappointed with Sonic lately (even Sonic 4) then Sonic Colours is definitely worth checking out. It’s a bit short but there is a lot of replay value with a variety of bonus stages and secret rings to get. Overall, this game makes me happy as it’s finally proven there are some people at Sonic Team trying to improve the franchise. Despite its problems, Sonic Colours is a very fun and solid game.

Sonic Colours gets a B+ for being a fun and awesome game with a few large problems.