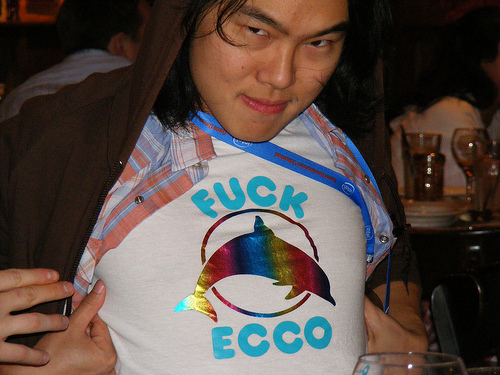 Hello folks and welcome to the first December edition of ‘What we’ve been playing’. Before you ask, no I am not going to take my name off this yet because I’m still a vein and desperate individual. Got that? Good. Well moving on, being December it’s nearly Christmas! Woo. Are you excited? I’m not. Fucking snow, stopping me from getting anywhere. I hate Christmas. And snow. And the faces of smiling Children. So instead of going out a lot I’ve been staying in and playing videogames. What have I (and everyone else who writes for Sega Addicts) been playing?

Well hit the jump button to find out, silly!

Stevie Grant- Writer of Top 10 Worst and Reviews of Games I Haven’t Played: I played a little Scott Pilgrim today and beat the game with Dark Scott. Also today I replayed some stages from Super Meat Boy. Damn I love that game. I also completed Epic Mickey. A lot of people have been giving it a bad rep but I genuinely think that it’s worth at least renting. Still the ending is stretched out as fuck, which is a shame.

In terms of Sega, nothing much. What you expected me to play a Sega game so I’d have something relevant to say? Ha! Your naivety is charming.

Josh Newey- Writer of With Great Power Comes Great Games and Underappreciated Gems:
Over the past week, I finally managed to play through Sonic Colors (Wii version). I’m surprised to say that I am not disappointed in the least. The level design is pretty uneven at times, but Sega did a damn good job it comes to balancing spectacle, speed, and actually feeling like you’re controlling what’s going on onscreen. I was also shocked to see just how much 2.5 gameplay was injected into it. Once again, some segments around the middle of the game were controller-chewingly irritating, but every aggravation was quickly nullified by some clever and exhilarating moment that redeemed Colors significantly enough to keep me playing. The music was also consistently enjoyable and never grating. I’m coming close to putting Colors over Adventure as my favorite 3D Sonic yet. Just ignore the fresh bite marks on my Wiimote.

I’m also delighted to report that I picked up Wetrix (DC) from eBay this week. It’s simple as hell – Build up land masses on a square-sized plot to form hills and dips. Drop rain in between and try to keep the water from spilling out over the edge of the plot of land. Really, the way the land falls from the sky and the shape of the land masses make this game feel like a 3D Tetris spin-off. Despite its simplicity and fugly graphics, I found myself playing this thing for hours. It has quite a bit of addictive charm, not to mention the most unintentionally funny announcer I’ve ever heard. Any Dreamcaster who’s looking for some unsung hero love for their favorite system ought to give it a try… if they can find it. I can’t imagine spending $50 for something this bare-bones back in the day, and it’s a pretty rare one, so finding it for much cheaper might be a challenge now.

Alex Barbatsis- Writer of Retro Reviews and Freaky Fridays:
Sad to say, I’m not really digging on Donky Kong Country Returns. Why do I have to blow dandilions again? I’ve also started a jug band with Matt Jay’s Dad called The Good Son. Its not about Matt Jay. Follow him on twitter @MrMattJaysDad

Alexander Sargeant- Writer of Retro Reviews:
Subterranean Animism, Dead Nation and Spelunker HD. All of which are pretty damn good. Get them all and enjoy abstract fun.

Sega related, I went back to Triggerheart Excelica and accomplished a 1 CC True Ending with both main characters, which was bloody impossible with Crueltear as I absolutely always get hit at some awful point in Stage 3 without the spread fire Excelica has. Also because I’m really quite bad at shooters. It’s still one of my favourite shmups of all time, which is an utterly ridiculous statement to make because it actually shouldn’t be. There are games with much better music, smarter mechanics and even fully fledged stories. Regardless, I can always come back to TE and enjoy the hell out of it like it was my first time. I think I’m just pre-disposed to the light hearted Gunbird/Gigawing style games.

Enjoying 999 on DS, which everyone should pick up if they like adventure games because it’s like Hotel Dusk but actually a good game. Similarly to somone’s GOTW last time, my first playthrough did not end well. Just started Golden Sun Dark Dawn as well, which I’m really enjoying although I’m only a little ways in at the moment. Once people start throwing around words like Psynergy Vortexes and Elemental Lighthouses I’m pretty much in for the long haul.

Pat Reddick- Community Manager/ Writer of Forum News and Not-so Classics:
I won’t repeat last week’s wordy paragraph about games I own but haven’t played. I’ll keep it very short: I have played nothing.

Tom Kyzivat- Artist and Podcast Co-host:
I STILL suck and haven’t been able to play anything! Damn working and moving and all that rot. I’ll tell you what I WILL play once I get back to IL next week and bogart my brother’s Xbox: Sonic 4, MvC2, Peggle and I’ll get my ass kicked in Street Fighter 4. Right on.

Alex Riggen- Editor in Chief and Podcast Host:
I’ve mainly just been playing some Epic Mickey since Tuesday. I’m not really enjoying it that much as almost every aspect of the platforming segments are annoying. The level design is pretty poor, the camera sucks, and it’s rarely actually fun. I find myself pushing on anyway though just to see what will happen next in the story and to play some of the 2D interludes between the main levels. The graphics and art direction are really amazing and some of the best on the Wii. I just wished the gameplay was equally impressive.

And that was what the writers who could be arsed to email me this week have been playing! Instead of my usual bullshit, I’m just going to remind you that you should tell me what you’ve been playing in the comments, and leave you with a very special video from a young Alex Barbatsis. Enjoy: