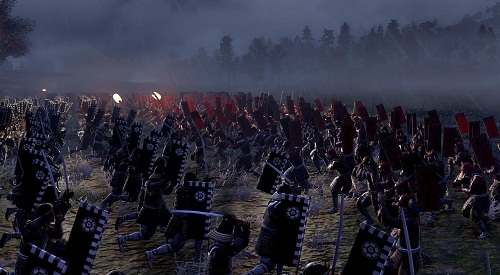 I feel like making a big deal about this because despite being a huge fan of the franchise, I’ve also never once played it online and Shogun 2 looks set to be the first title to convince me to have a go.

Quintin Smith of Rock Paper Shotgun recently wrote a preview for IGN, which gives a great overall feeling of what the final product is shaping into (Read it here!), some aspects of which sound especially intriguing. Every achievement you make in the game awards you with a piece of armour, which can be equipped by your online General, acting as an avatar for your personal conquest. These can be multi-player achievements as well as single-player ones, so even if you’re an online greenhorn you can still exude fear from your enemies if you feel like dressing up for the occasion.

The more pragmatic additions are as follows. The multi-player map for instance lets you roll over various territories to see what bounties lie within them. Unlike most RTS games, winning matches on different battlefields here will unlock new unit types and other bonuses. This means you get to effectively choose your reward before the game even matches you up with an opponent, making the battles more about trying to capture territory that’s strategically important to you as a general than simply scoring another victory. You can also upgrade your units as experienced troops progress through skill trees, but become harder to replace, and your own general can specialise in various aspects, such as inspiring moral in his troops or crushing it in his rivals. There’s even a kind of collectible game involving various loyal retainers, granting various boons to your force depending on which you take with you into battle.

It’s a great read, and it has me really excited to get my hands on the game in March. It looks like Sega and Creative Assembly are really pulling out all the stops to make sure that everyone is able to get the most out of Shogun 2 when it hits.