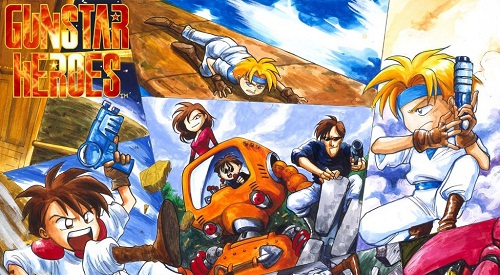 It’s that time again! Sometimes I think I’ve done a few too many of these, and then I remember a game I haven’t had a chance to honour yet. Today’s lucky remembered is Treasure’s Gunstar Heroes, which is one of the finest two-player games on the entire Mega Drive (It is not -the- best, because Toejam and Earl exists).

Gunstar Heroes is part of Treasure’s incredible set of original IP’s, along with Guardian Heroes, Mischief Makers and Bangai-O. Precursor to all of them is Gunstar on the Genesis/Mega Drive, which is a one/two player run and gun action game similar to Konami’s own Contra. Run right. Kill everything. That’s pretty much the guiding principle, however the differences between these two titles hugely outweighs their similarities. For one, Contra is brutally difficult, especially Hard Corps, but Gunstar always seems an awful lot fairer than that. You have a large life bar measured numerically that you can replenish along the way with pick-ups, meaning not every single attack will mean instant death, but also conversely that some attacks are far more devastating than others.

To combat this, you have a vast array of weapons at your disposal. At the start of the game you’re given the choice to either shoot while running, or shoot while standing still, altering just where your body goes when you need to shoot in a specific direction. It’s actually a much more important choice than it seems, as either one can save your life on the correct occasion, and the negatives can be negated by certain weapon combinations. You’re able to pick one of four stages at the start, completion of each gives you an extra 20 HP for the successive stages, so the idea is to take the one you find easiest first to put off dying that little bit longer.

Whatever stage you end up on you’ll encounter a range of weapon drops, totalling Homing, Lightning, Fire and Force. Each can be combined with one other weapon type to create an entirely different third weapon, for example mixing Fire and Force creates a fireball launching cannon that’s slow but powerful, whereas a homing and lightning makes a weapon that deals moderate damage but requires absolutely no manual aiming (perfect if you like to focus on evading attacks).

These all look and feel great, and there’s a real sense of attention throughout the game on just exactly that tensile enjoyment. The backdrops and character sprites are really vibrant, but the way they blast black and explode furiously really sells the effect. Bosses physically reel back from attacks, rather than simply flashing to indicate damage, and some of them even transform on screen in imposing displays of (seven)force. As well as guns, you also have a bunch of easy to use close-combat attacks like slides and throws, and these are incredibly fun to use, especially when you’re able to throw your player 2 straight into a group of enemies for a fast barrage of brute strength. It might be an easier game than Contra, but the trade off is sense of empowerment to go along with a really well designed suicide mission.

Speaking of which, the level design in this game is insane. The first stage is your regular jungle assault, although with some incredibly intense moments like sliding down a pyramid while battling for your life. The second has you fighting on rails against a train and the villainous Green (seven)forcing you to ride against the floor, ceiling and walls to stay alive. The fourth starts off fairly generically, before throwing you into the most brilliantly executed board game, where throwing a die doesn’t decide whether you fight a boss, just which one of the dozen or so that you will. This part is one of the best moments in the game, as there are a whole host of hilarious encounters, tough battles and secrets to uncover, like a boss who threatens to destroy all your progress if you lose to him and the board game designer himself who teaches you that if you don’t kick a man while he’s down, he will blow your face up with a bomb (A lesson for us all).

Naturally from this point you launch into space, battle shmup style a bunch of enemies and a Seven Force fight on a far grander scale, before consequently fighting a new version of every boss in the game. During this point, you’re actually viewing the game on a smaller display, as all the bosses you’ve encountered before watch at the bottom and see you foil all their plans, before they one by one leave to fight you. This actually returned in Treasure’s Sin and Punishment 2, and it’s amazing how original an idea that is today. I love when a game establishes a rivalry between characters well, but when it does so with an entire villainous organisation is truly remarkable (something the Kingdom Hearts games, for all their verbosity didn’t manage to convince me of with their mysterious Organisation XIII).

I'm sorry, I tried. This is really as boring as it gets.

I just did something bizarre there in that parenthetical, comparing a JRPG to a running-jumping shooter, but it illustrates pretty well I think just how Treasure treat their properties. Gunstar is so much more than just a run and gun shooter, playing with variety by adding melee combat and even a damn board game, and it’s that play on genre conventions that really makes the entire ensemble work. I think that’s truly Treasure’s unique skill when it comes to game development, in bringing out something in all their games that was never really needed for it to succeed, but adds an entirely original layer to each and every one. Whether it’s the character progression through familiarisation with a mangaka’s works in Astro Boy, or introducing platforming and swordplay to an on-rails shoot’em up, or even as they did with Ikaruga, create an absolutely unique shmup experience by actually taking away the most ubiquitous elements of the genre.

Gunstar Heroes is an amazing game, and this is evidenced no better than by just how easy it is to get a hold of to play these days. Not only was there a PS2 port released in Japan, but it was also released on Nintendo’s Virtual Console as well as the XBLA and PSN, and even the damn iPhone. There’s literally no ignoring it, and there shouldn’t be. It isn’t the most challenging game, but again, it’s one of those games where you simply can’t criticise it for anything, because of one very basic reason; It’s just too damn good.

I lied. It’s joint first with Toejam and Earl. One of the Mega Drive’s few true treasures. A+

"Chillax" with some acoustic Sonic guitarists