Though they no longer receive first party support, Sega’s consoles are far from dead.  Homebrew and independent developers continue to breathe life into Sega consoles to this day. One recent example is  Wind and Water Puzzle Battles from independent publisher Red Spot Games.  The game was released in North American for the Dreamcast in 2008. Does Wind and Water live up to the legacy of the Dreamcast, or is it just another Tetris rip off? Find out after the jump. 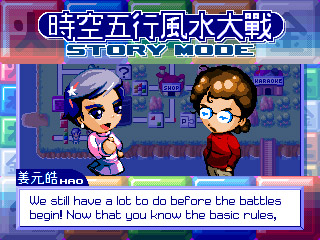 For a puzzle game, Wind and Water has quite a unique story.  It is very self referential, much like Segagaga. The game takes place in a world where the Wind and Water game is soon to be released. Players take the role of Amy. While traveling through a Super Mario Bros 3 inspired map, she teaches people how to play Wind and Water and recruits them to appear as characters in the game. At many points, Amy will run into the game’s designers and pressures them to complete the game on time. 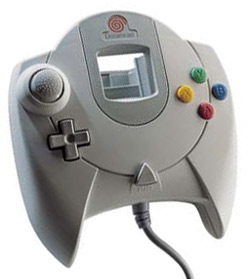 The controls have an extremely minimal learning curve. After about ten minutes with the tutorial, it feels like second nature. Players move the cursor with the D pad and rotate diamonds using the A or B buttons. For the most part, these controls feel fairly standard. 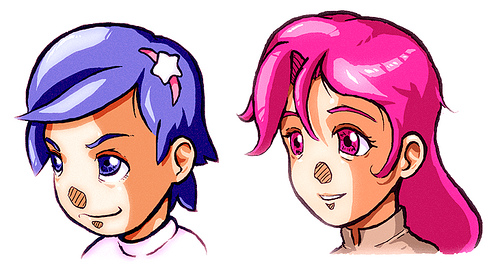 The game’s graphics have a simplistic look filled with many hand drawn sprites and a distinct anime style. Seeing so much 2D pixel art is quite reminiscent of the Saturn. Thought the art is simple, it is well drawn.  One can tell that a great amount of heart went into the game’s drawings. The game is also filled with color, something that is sorely lacking from many games within the current console generation. Though Wind and Water may not push the limit’s of the Dreamcast’s graphics, its simplistic style is beautiful to look at.

The music is simple as well, filled with many Asian influenced midis. In this instance, the simplicity is less than desired. Not only do many of the songs sound similar, but they can get a bit repetitive and tiring. There is also no voice acting to help break the monotonous nature of the music.  One might feel as though they were being held hostage in a Chinese restaurant with the music looping over and over. I eventually played the game on mute and popped in my iPod headphones.

Despite its weak music and simple graphics, the game is a wonderful testament to the continued lifeline of the Sega Dreamcast. The strong story and gameplay elements make Wind and Water the perfect addition to the library of any Dreamcast enthusiast. It’s a great alternative for those who have grown tired of playing Chu Chu Rocket and Sega Swirl.   You can purchase the Dreamcast version for $39.99 from Amazon with free shipping or download the free PC version from the official Wind and Water website.

Sonic Generations is 66% off on Steam right now