I’ve been putting off this review for a few days, because each time I feel like not finishing the game is not giving it an actual chance, as if the missing piece to the formula of satisfaction was the climactic finale. Each time I would take another shot at it, and after another two hours I would entirely give up again. Why is that, you might ask? Well..The world of Hyperdimension Neptunia is a strange one, consisting of two tiers broken into several sections. The upper-tier known as Celestia is where the CPU Goddesses reside and battle to decide who is truly the strongest. Below that are various lands that worship each of the Goddesses, which affects their entire development. Lastation for instance is a technologically driven industry where every NPC worth their salt devotes their lives to an Electronics Expo held every four years. In contrast, Lowee is a more laid-back winter wonderland. Each is also presided over by their respective leaders who are the human forms of the CPU Godesses which approxmiate each of the current generation gaming consoles.

These are of course the 360, PS3 and Wii. The fourth is the personified console you take control of, Neptune, which is based around an unreleased Sega console. She’s also the first of the four Goddesses to be kicked down from Celestia in a battle where Blanc, Vert and Noire turn on her in an attempt to end their massive stalemate. Neptune is therefore the character you’ll spend the most time with, which is why it’s quite a boon that she’s a pretty fun lead character. She’s galumphs through the narrative in an enjoyable way, making clumsy introductions while never really coming across as annoying, even when she is annoying other characters. Joining her are Compa and IF, characters based around the creator companies Compile Heart and Idea Factory. They make a pretty believable team, and during the best moments of the game the banter feels reminiscent of the more hang-out moments of Persona or Resonances of Fate.

I also want to be quite emphatic about how much I appreciate the localisation job that NISA have done. The dialogue is about as playful as it was in Trinity Universe, but it also feels a lot more cohesive. Part of that might be the tighter cast, as writing banter between a Dog Deity and a Prinny from an entirely different universe can’t have been easy in Trinity Universe. The voice work is also surprisingly decent, more so because the main cast are entirely female and yet each and every character still manages to maintain their individuality. The NPCs too are fairly well acted, with their performances let down only back the lack of character animation, or even a portrait, as all of them are entirely blank silhouettes. 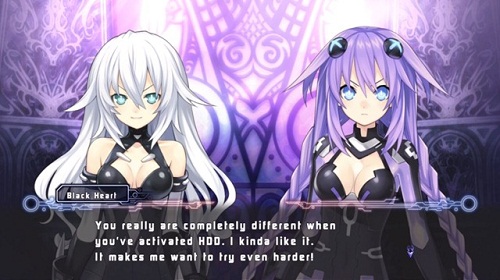 I really like the 2D artwork, especially with the motion added to the usually static character portraits in cut-scenes. It really helps to keep such moments interesting, although some application of this around the chest areas of certain characters. This could be an issue for certain people, but I guess if you’re interested in picking up a game prominently featuring scantily clad mecha-musume chances are this might actually be a bonus for you. It never bothered me an awful lot, and the younger members of the cast like the adorable Gust are spared such exposure.

Okay, no more stalling. The unfortunate reality surrounding Hyperdimension Neptunia is that outside of the dialogue and character interactions there is very little that’s really any good. It’s a game focused around traditional turn-based battles in rather simple dungeons, where you progress from start to finish (either a boss or an exit), or you travel hunting for certain random enemies or loot. That is literally the entire game, with even mandatory story dungeons taking place in identical dungeons to other optional ones. Every dungeon in the game is a series of corridors in different themes, sometimes snowy forests or ancient ruins, but always entirely linear save a few break-offs with bonus loot.

This is where I would usually defend the game with something about the battle system redeeming the dull set-up to the encounters. With crushing I have to say that this is the worst part of the entire game. Battles are simple, with a fairly neat combo system you can edit to make best use of your available Action Points, which you need to execute certain attacks at various levels of expenditure. Finishing a chain of four attacks initiates an end-bonus, which differs from move to move letting you either switch in with a character in the back row or keep your vanguard fighting into another combo. Continued assaults can lead to guard breaking an enemy, which lowers their defense drastically and lets the character you’re controller earn back some spent AP to really power on the hits.

The battle animations are fairly slow, especially for the gun attacks, which means you’ll probably find yourself sticking with weapons or physical attacks just to save time. That is of course until you realise that the incredibly helpful Guard Break has a set time limit until it recharges the enemy’s defense. This means the best way to make use of this time is actually to hit L2 to skip every attack animation you make. It sounds like an exploit, but honestly fights take so ridiculously long that I have no idea how you could have the patience to fight an entire boss without doing this, especially when outside of Lowee there is some obvious slowdown during 3D battles despite not actually looking at all interesting beyond the models for the main characters.

I also don’t know how you would survive that long, as the only form of healing is through item skills. This is easily the stupidest idea anyone has ever had for a game, and I’m going to demonstrate why now. In Final Fantasy, if you want to cast a Regen effect on someone, you either use an item or magic. In this, you need to level up enough for a character to learn the skill that lets them do it, then you need to buy/collect three different items until you have thirty of each of them. Then you need to allocate skill points (I had 185 of them in this instance) to be able to use it 100% of the time, which could be more than half your total. Then you need to enter a battle with more than 30% of your total health meter. Only then, will you be able to start a battle with the Regen status effect. You will need to repeat this process for EVERY SINGLE CURATIVE SKILL.

This is just too much effort for such a simple, not to mention vital, battle procedure. The fights are long enough without you having to restart them from the beginning because you either lost the only person who could revive people, you just couldn’t get a healing skill to trigger because you didn’t set the usage rate high enough or fulfill the condition, or you just couldn’t keep track of how many of four different items you had left because every single skill has a different amount of items they require. It’s ludicrous, and the madness doesn’t stop there. Neptune’s CPU form needs to be activated every fight, even though there doesn’t ever seem to be a reason not to use it in every fight. There are no multi-target attacks until Neptune hits level 20 and learns Neptune Breaker, which not only hits every enemy but also deals absolutely ridiculous amounts of damage, even going as far as making the other members of your team redundant outside of setting the enemy up to be guard broken by Neptune.

Worse still the most exciting parts of the premise are never built upon. The summon discs containing classic Sega references are cute, with Fantasy Zone kicking in with a neat little beam animation, but the magic attack that follows is simply a standard one of that particular element, with no real baring on what game character was called in. Also desite featuring strongly on the box, all the other console characters will only join your party once you reach the final dungeon in the game, if you fulfill a series of confusing demands (I even had to look up in a FAQ just how the hell it all shakes out). You can finish the game without them, which clearly I never did, but this leaves them as entirely optional characters. The other two heroines, Gust and NISA will join your side if you look for them, but they will instead sit in a part of your menu labelled as EXTRA until you purchase the available DLC. They’re on the box of the game, and aren’t locked as a form of pre-order protection by the creators/publishers. This strikes me as simply a terrible practice, and really sealed my disappointment in this game.

I wanted to like it, I really did. I enjoyed Trinity Universe. I really like the idea of making a simpler dungeon crawler with a stronger emphasis on character interaction. I like the characters, and I loved getting to hear certain BlazBlue voices appearing in another title. However there are just far too many erroneous decisions to really recommend it to anyone. RPGs are notoriously lengthy anyway, but the slow paced battles and massive repetition exacerbate this incredibly. You will never find a single enemy/boss that you need to engage differently from the last, and the same strategy will work on everything you encounter. Unless it’s too strong, in which case you have to level up. There’s no interesting character customisation like the planet accessories from TU, it’s simply a case of attacking the same enemies over and over again until you can beat the next obstacle. I came back to this so many times, really trying to find something to enjoy about it to push me into finishing it.

PS3 House of the Dead: Overkill will contain 60% more content 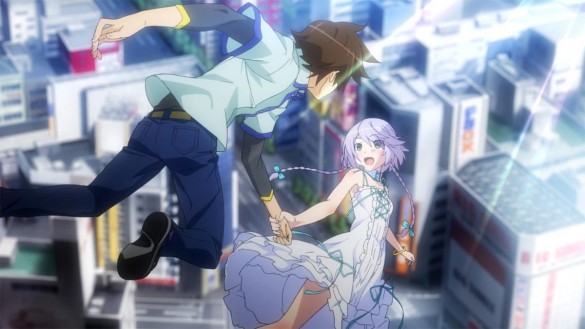