With the advent of Metroid Prime 3 in 2007, that tiny cross-section of Wii-tards and FPS fanatics finally had a title that they could champion as proof that motion controls could be more than a fleeting novelty. Some even went as far as saying that the game’s control scheme had the potential to make the Wii the go-to console for shooters that demanded pinpoint accuracy. It was this unfair expectation that drove a staggering amount of hype for The Conduit a few years later. High Voltage had one hell of a task to complete.  With its incredibly deep and fully customizable control scheme and graphics that just didn’t seem possible on the Wii, they carried the burden of delivering the Wii’s answer to some of Microsoft and Sony’s biggest franchises.

It’s not surprising, then, that The Conduit’s release was met with general disappointment. Sure, the controls were accurate almost to a fault, and the gameplay was generally there, but people had such incredibly high hopes for both the campaign and the multiplayer that the game’s rather bland campaign coupled with Nintendo’s woefully restrictive online experience left a prematurely constructed fanbase with a bland taste in their mouths and a glazed look in their eyes.

With this history in mind, I’m a little nervous to lay Conduit 2’s cards on the table. The series has a huge amount of potential, and even though some glaring major flaws still dampen the experience, there’s a substantial amount of fun to be gleaned from it. After playing through a painfully brief campaign and quite a bit of the surprisingly addictive multiplayer, I can easily say that Conduit 2 is the closest thing the Wii has ever had to an original and engaging first person shooter.

But really, is that saying much? 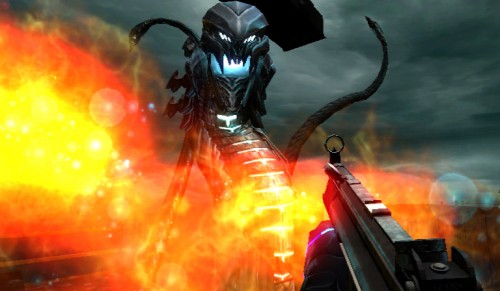 It’s obvious to anyone who’s played the inaugural entry in the series that High Voltage was ostensibly aiming for something narratively ambitious. The story, while on the surface a mere amalgam of human vs. alien vs. human conspiracy plots we’ve seen in so many shooters before, strived to deliver a bounty of expositional information to set up a universe. High Voltage also made some clever stabs at some original concepts and characters, the most notable of which being Michael Ford’s right hand man, the ASE (All-Seeing Eye).  Despite this well-meaning endeavor, The Conduit still struggled bring these elements together to create something coherent and interesting.

Conduit 2 approaches this goal from a different, more streamlined angle, dropping any and just about all exposition in favor of a clichéd, loudmouthed protagonist (“I’m a KILLIONAIRE!!!”) and brief, sparing cutscenes. While this makes the game flow a little better, it only works against High Voltage’s attempts to articulate a fleshed out game world. Instead of feeling streamlined, the campaign’s plot feels painfully barebones and slapdash in its construction. Story details that seemingly try to wow the player and new characters like the TRON reject Andromeda aren’t given the appropriate narrative weight to substantiate their relevance. Everything new to Conduit 2 feels underwhelming and matter-of-fact, making it much harder to invest in a campaign that lasts for just a few hours. Exacerbating this frustration is the painfully disjointed animation and voice acting that tries to move the game forward. Watching Andromeda struggle to talk to you while her lips move independent of the words and her head is jerking in fifteen different directions is hilariously clunky and awkward. I’ve already mentioned Mr. Ford’s oh-so-hilarious quips that seem pulled out of a second rate Saturday morning cartoon.

It is worth mentioning, though, that these clunky animations belie some of the game’s rather engaging and pretty environments. Stages are much more varied and interesting this time around, even if some of their designs do get a bit repetitive. While one area has you sifting through the rubble of a city picking off the alien and human opposition as you progress, another has you fighting off stone guards in a Chinese mansion, or searching for Prometheus’s dying alien sibling in a snowy Siberian base. At their best, these unique and pretty stages come close to something you’d see on HD consoles. It’s just a shame character animations and character design couldn’t meet that same level of quality. 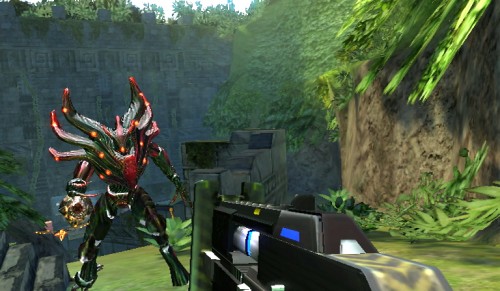 This newfound variety also extends to one of my favorite elements of the game: the weapons. Conduit 2 does a much better job than its predecessor at offering some clever twists on average firearms. This includes guns like the Hive Cannon, which allows you to shoot out a single point and then fire a sea of insect-like things that will hit that point from around corners and from large distances, or the AR-C Eclipse, a strategically designed weapon that allows you to cloak yourself for temporary stints when you aren’t firing. Conduit 2’s arsenal really helps to add some flavor to the campaign, forcing some strategic thought into a mix of normally straightforward run-and-gun gameplay.

Also adding to the allure of the campaign is the fact that the ASE’s role has been completely overhauled. This time around, it takes on the role of an item scanner, allowing you to scan interesting “Conspiracy Objects”, blueprints, and coordinates that help to further flesh out the campaign.  With this new information, you can obtain weapons for customized loadouts, upgrades for your character, and even maps for brand new, untouched stages. This is one of the best development choices in Conduit 2, as it provides some real incentive for returning to previously explored areas. It is thoroughly satisfying to stumble upon these little trinkets throughout your journey, and even more so to piece together your payload to do the maximum amount of damage possible.

Speaking of satisfying, I can’t begin to express just how in love I am with Conduit 2’s controls… Finally. The sensitivity of the motion control in the first Conduit threatened to turn me off completely.  The Wii Motion Plus control is even touchier, making it extremely disconcerting to adapt to an already ambitious control scheme.  For example, meleeing is frustratingly disorienting, as it sends your camera flying every which way.  It’s also way too easy to accidentally kill yourself with a grenade just because you’ve dropped or lowered your nunchuk a bit too quickly. 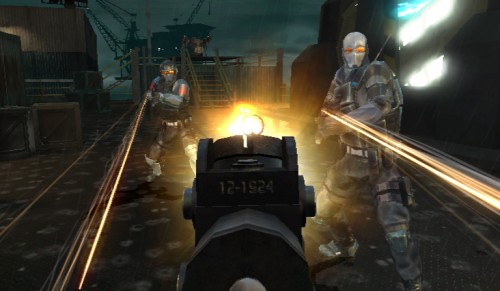 Once you’ve gotten used to these flaws though, playing with your Wii Motion Plus becomes amazingly fluid and enthralling.  The speed and accuracy really drives up the potency of a firefight.  Headshots become second nature, as does looking down the scope, turning, and chucking out grenades.  Dual stick purists may chuckle and turn up their noses, but I implore anyone who wants to try this game to give at least a couple hours to the Wii Motion Plus control scheme before resorting to the Classic Controller Pro or Gamecube controller. It’s just so much damn fun.  This exciting and engrossing control scheme is easily the primary feature that kept me going in the consistently clunky, occasionally glitchy campaign.  And boy does it get glitchy…

While not game-breaking by any means, I occasionally found myself infuriated by some of the awkward glitches peppered throughout Conduit 2.  This includes enemies flickering in and out of cover, entire environments that refuse to pop up until you are inches away from an incoming enemy, and the rare instance where your arms become suspended and unable to fire until you’ve died or given up and swallowed your controller in aggravation.  In a shooter as simple as this one, occasional glitches like this can be tolerated, but their ubiquitous presence really helps to hold back Conduit 2 from standing amongst the big boys as a polished shooter experience.

I can happily report, however, that these glitches are really no longer an issue once you dive into Conduit 2’s vastly improved multiplayer experience.  While it doesn’t add a whole lot of anything new to the genre overall, the package is leaps and bounds more polished than the previous entry in the series.  High Voltage did some very clever finagling to get around the Wii’s online and offline shortcomings, something that had to be done for a multiplayer FPS to ever get noticed on the console.   First off, they’ve included an Ally system much like the one found in last year’s Tatsunoko Vs Capcom.  This feature allows you to find opponents you’ve previously faced without having to deal with all the restrictive friend code bologna that the Wii is infamous for.  High Voltage also added in their own independent set of achievements, incentivizing players to dig into the multiplayer and to build their character, even without the satisfaction of an increased Gamerscore. 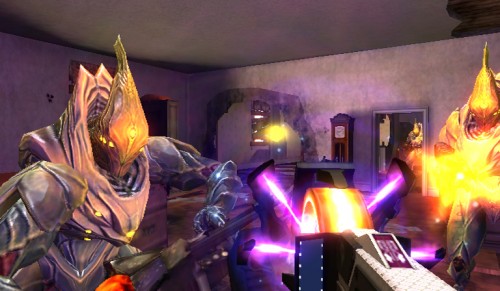 The lag, a major problem with the first Conduit, is virtually nonexistent in its sequel.  I played through hours of multiplayer in a single sitting, never once having issues with dropping from a match or jag-jag-jaggy framerates.  The most noticeable online omission is the lack of general chatting.  If you are buddied up within the ally system, you can talk to your opponents using the Headbanger Chat Headset, but Wii Speak is not supported at all, further confirming the death of that all-but-useless little tool.  I have never been one for chatting during matches, but I can definitely imagine this serving as another turn-off for FPS purists looking for a decent team-based multiplayer fix on the Wii.

The multiplayer maps are all quite decent, including one or two standouts whose design makes for some really interesting battles.  My personal favorite has you fighting around a downed alien ship, whose engines are directly facing into the playing field.  At any point, a player can jump into the ship and trigger the jets to incinerate any players unfortunate enough to be caught in their path.  As with the level design in the main campaign, these multiplayer maps make for some varied and interesting matches, even if the overall gameplay remains much more basic than your Modern Warefares and your Killzones of today.

While I certainly can’t say that Conduit 2 hits the target that it so desperately wishes to obliterate, I can say that High Voltage is getting a hell of a lot closer.  In just 4-5 hours, the campaign dragged me from utter indifference into a state of genuine investment, an accolade I honestly cannot give to the first Conduit.  I wish I could say this was at least partially because of the story, but instead I find myself progressing despite its relatively hackneyed and ho-hum delivery.  In the end, the combination of some sharp and addictive controls and a multiplayer whose potential just hasn’t been seen on the Wii before is what really makes Conduit 2 something worth writing home about.  If The Conduit wasn’t your bag, give this sequel a try. The story will probably still leave you cold, but the accompanying gameplay is something that any shooter fan should try at least once.

Despite a campaign that’s still struggling to pull its strings together, Conduit 2 gets a B- for its simple but fun FPS gameplay and a vastly improved multiplayer experience.

Hideki Kamiya would prefer a Viewtiful Joe sequel over Bayonetta 2