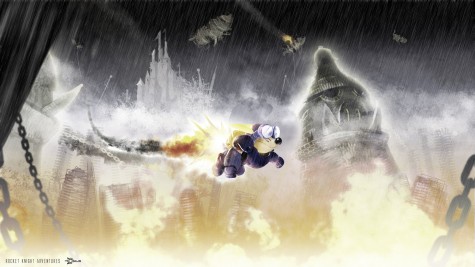 I mean that in the nicest way possible.  Just about every song and sound effect in its brief running time is boisterous and catchy in a way that demands attention, so much so that the brief silence that accompanies the end of each stage brings with it an odd sense of unease.  You’ve grown so used to being bombarded with a cacophony of crisp and satisfying blasting rockets and swishing swords that you feel numb and alone in the few moments that you’re not soaring into the sky or sending pigs running.  You won’t be uneasy for too long, as the next introductory “DUNDUNDUN DUHHHH!!!” is waiting just around the corner, ready to simultaneously give you a heart a attack and rev you up for Sparkster’s next jet-fueled adventure.

Rocket Knight Adventures may not be the most prominent game in the Genesis catalogue, but I personally consider it to be one of the very best platformers ever made. Its stellar and attention-demanding soundtrack is responsible for quite a bit of that accolade. Trying to pick just one sound effect has proven to be a daunting task, as just about every audible cue of this game is imprinted in my mind as an essential piece of who I am as a rather obnoxious guy who happens to play videogames.

It is for this reason that I am going with three different sounds this week:

“CHOOOOOM,” “ZEINK!”  and… Well I can’t really phonetically pronounce the last one.  You’ll see what I mean in a second. 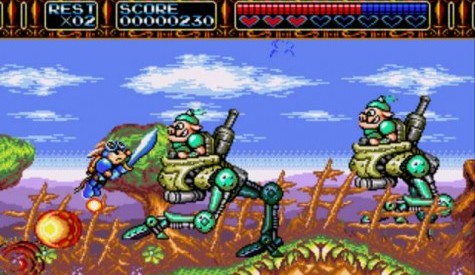 Platformers were a dime a dozen back in the days of 16 bits, three button controllers and Sega Vs Nintendo playground brawls.  There were a sea of characters who were a carbon copy of Sonic’s spunky attitude, had an almost identical look (an exclamation point on his shirt?  What a rebel!), and really offered absolutely nothing new to the genre.  While Sparkster is really no different in terms of personality, he did have one primary gameplay feature that set him apart – his badass jetpack.

This rocket-fueled pack drove just about every element of Rocket Knight Adventures’s gameplay, allowing Sparkster to perform spin attacks, ricochet off walls to scale peaks, or just jet forward sword first, stabbing anything unlucky enough to stand in his path. Every one of these moves proved so useful that I found myself dedicated to keeping that rocket charged at about every single moment of the game.  Apparently Konami picked up on this, as the much inferior sequel Sparkster automatically charged your rocket for you after each use, tactilely distancing the player from his weapon and thus reducing his or her overall sense of feedback and empowerment.

Anyway, what really made Sparkster’s jetpack something special was the incredibly satisfying burst of sound that accompanied it.  Once you fully charged your pack, you could hear the amassed energy just aching to get out.  Letting go of the button ignited a powerful burst of fire, ejecting you forward and slicing the air with a satisfying  “CHOOOOOM” emission in its wake.  Accompanying this sound was a high-pitched whine that sounded like an electronic engine winding up or a battery recharging.  For the Genesis’s soundchip, this multilayered effect was pretty impressive.  The charging noise and subsequent explosion and engine winnie all came together to make Sparkster’s Jet Pack feel real and the sense of weight and power something substantial and unique. 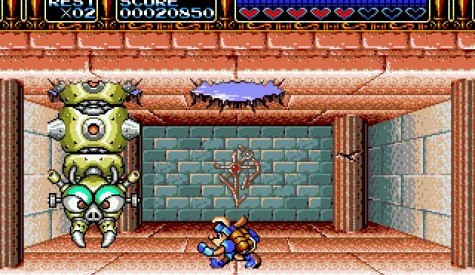 If Rocket Knight Adventures does anything right, it’s the bosses.  Each stage comes with the promise of a screen-filling, punishingly difficult foe waiting to crush you at the end.  There’s the giant fanged worm who comes crashing through the ceiling of a castle, or the genuinely frightening and brutally tough ghost train, or the lava-faring robot piranha – Each one more beautiful to look at and genuinely intimidating than the last.

Perhaps that’s why Konami chose such a satisfying sound to supplement every hit you manage to land on those unforgiving bastards.  That sound, which can only be phonetically explained as a metallic “ZEINK,” feels undeniably damaging, so much so that the player himself flinches in sympathetic pain the first time they hear it.  The enemy flashes a good 42 colors each time they are hit, sometimes enough to actually cause some graphical slowdown, so you know that shit stung.

Further driving the excitement that comes with this audible bloodletting is the fact that Rocket Knight Adventures has pinpoint accurate control.  This means that you can throw out hit after hit after hit, triggering a symphony comprised of “ZEINK!  ZEINK!  ZEINKZEINKZEINK!” as you rain down hell with the point of your sword.  If you perform a spin attack, you emit one extended “ZZZZZZEEEEEEINK,” a sound which helps to keep you motivated even after that damn train killed your ass for the sixth time.  It is for this reason that “ZEINK” is easily my favorite damage effect in a game. 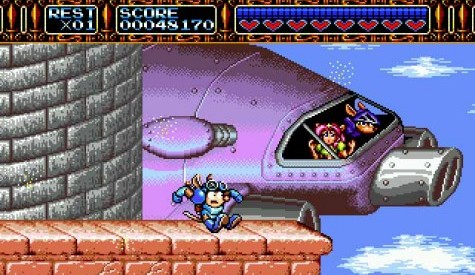 If you sound like Sparkster when you're surprised, stay away from me.

“PHLAAA…. I dunno.  It’s kind of like an elephant…or…something. Shut up.”

So far I’ve talked about the sounds that do a really good job of making the player feel strong and the in-game weaponry feel tactile and unique.  I haven’t mentioned the sounds that Sparkster himself makes.

That’s because they are fucking terrifying.

Throughout the game, you’ll only hear Sparkster utter a few noises, and while a few of them are meant to be humorous, their volume and sharp tone is rather off-putting and at times genuinely disturbing. If Sparkster dies just by losing his hearts, the sound is a relatively tame albeit oddly echoing wisp of exhaustion, but that’s not all. You know that sound you get when you hold the end of a balloon full of air taut and deflate it just a little bit?  That’s the sound he makes when he is startled by a pig leaping out of a package.    You know that sound an elephant makes when his throat is stabbed by a white-hot soldering iron?  That’s the sound Sparkster makes when he falls to his death.  You heard me.

Every time Sparkster is knocked off of a platform by spikes or falls into lava, he doesn’t let out the cute little yelp you might expect.  No, instead, you get this horrifying hell-spun echo that inspires players to swallow their tongues and clench their teeth until they crack.  That sound is remarkably similar to an elephant’s trumpet, but is just so much more haunting and resonant when it comes from the cute little face of an armored opossum like Sparkster.  I suppose it inspires the player to want with all of their being not to die, but what the hell Konami?

Sure, this sound isn’t really a memorable and distinctive “sound of Sega,” but I will say that it’s stuck with me for years, and I honestly remember having dreams that this noise interrupted and subsequently transformed into nightmares.  It’s a lasting memory that I’m not happy with, but it’s a lasting memory nonetheless. 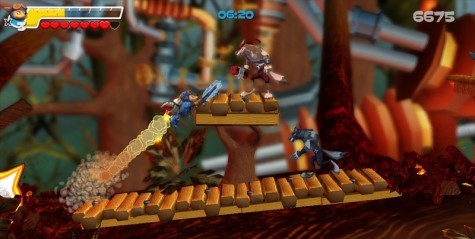 God I wanted this to be good.

These sounds are some of the primary reasons that I consistently bash the recent Rocket Knight reboot.  Before I downloaded it, I heard that it was a decent if unremarkable platformer that did a good job of at least bringing back some Sparkster love.  Once I actually played a couple stages though, I was taken aback at how bored I instantly became.  Rocket Knight was indeed a serviceable platformer, and had some new gameplay quirks that helped to flesh out the experience, but almost every ounce of bombastic character and personality that made Rocket Knight Adventures memorable was missing.  The stellar soundtrack was switched out for a tepid orchestral whisper that attempted to simulate some of the classic themes.  The visuals were pretty but painfully uninspired with noticeably tiny character models.  The most noticeable offense, however, was the lack captivating and admittedly intrusive sound effects that made the original title so audibly attractive and unforgettable.  Their proud volume and triumphant character stood for everything that a Rocket Knight game is supposed to be.  Stripping that away just left a vapid, bland experience whose personality is merely a shadow of its former glory. 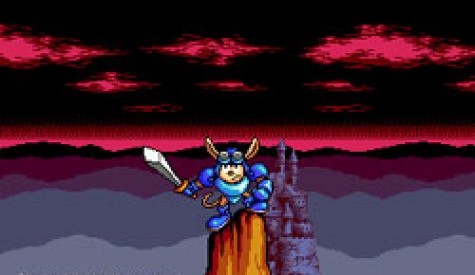 I would kill for just one more shot.  Rocket Knight Adventures is a magnificent game, one that deserves another chance at reminding us just how great an opossum with a jetpack can be.