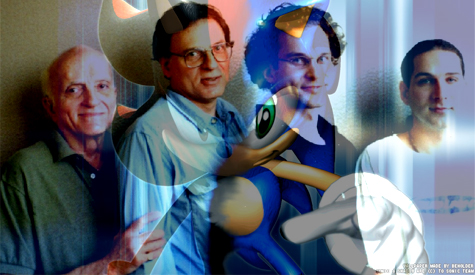 It’s time for a little thing called “The Sega Addicts Speak”. It’s a thing where people who are addicted to Sega speak in tongues due to the Sega “drug” taking over their vocal cords and thus producing words.

Hit the jump to read our answers to the ever burning question, “What level from Sonic’s past do you want to see in Sonic Generations?”

Sven Wohl: I’d want to see ‘Genocide City Zone’ in Sonic Generations. The reson for this is simple: This zone for Sonic 2 was never finished and only elements have been reused in certain other zones. I’d really love to see what the original concept for the zone was like, what music will be chosen and what mood the zone has. I mean, the name alone is so 90’s edgy and downright cheesy, I just want to see what they are able to do with it!

Pat Reddick: And I thought picking a single Sonic game would be difficult. Instead of thinking about this at great length, which I feel might kill me, I’ll go with the first one that comes to my head: Hydrocity Zone. I choose this one mainly because of the awesome music that goes along with it. The music of Sonic 3 is overall fairly solid, but the songs in this section in particular are simply incredible. I hum/whistle this tune to myself all the time. Almost obsessively. Probably an unhealthy amount of time. I actually remember this being one of the better water levels I’ve played, so if the obligatory water level is anything, I’d rather it be Hydrocity than anything else.

Alexander Sargeant: Hard question is hard! I would’ve picked Casino Night from Sonic 2 but I actually think the Sonic 4 recreation of that was actually pretty solid. To pick a couple of odd ones, I’d love to see Spagonia’s Day Stage again as that was easily the highlight off the entire of Sonic Unleashed. The great music really set the pace of the game from rushing sections to the more laid-back rail grinds. Other than that I’d love to see a revisit to Starlight Carnival from Sonic Colors. It’s the closest I think a Sonic game has ever come to a level of Rainbow Roads abstractness. The indoors sections were a little tiresome, but I loved the feeling of charging about atop this barely existing road between colorful battleships and lion-faced cruisers. Sonic stages are always interesting in an intimate way and Starlight Carnival achieved something pretty compelling by pulling back the camera and giving Sonic a track on a much larger scale.

Fuck Oil Ocean Zone. That’s all I have to say on the matter.

But seriously, I would pick the very first stage of Sonic 3. Angel Island. Now I know what you’re thinking. We already have a ‘first stage’ in Sonic Generations. But the key difference is the second half of Angel Island. You know what I mean. Everything gets burnt down and everything looks like a hellish version of the very beginning of the level. It’s a really unique thing to happen, especially in the very first stage. And i’d personally love to see it again.

But I don’t care if it’s in it or not. As long as the game doesn’t have fucking Oil Ocean Zone.

Josh Newey: Oh man, what a fantastic question. Quite a few come to mind, most of them original 2D stages I’ve always wanted to see updated. I’d loooove to see a 3D adaptation of Mushroom Hill Zone from Sonic & Knuckles. That area was just beautiful to look at, and the changing seasons is such a novel little touch that could look so lovely in HD. I’d also be very interested in playing through a brand new interpretation of the Mystic Cave Zone from Sonic 2. While this area once filled me with rage, I can’t deny that its visual aesthetic is like nothing else found in a Sonic game. The deep purples and bright greens give the zone an air that is somehow both creepy and dazzling. Once again, an HD interpretation of this would be like having glitter poured directly into my eyes… Actually, that sounds pretty painful…

Finally, I would very much like to see Windy Valley from Sonic Adventure. This was easily my favorite stage of that game. Its clever gimmicks and thrilling aerial acrobatics are what first convinced me that a 3D Sonic could truly live up to its 2D counterparts. Going back to it now, I realize just how buggy and inconsistent its physics are, but that just makes me want an update even more. Broken physics and camera aside, the structure and pacing of Windy Valley were damn near brilliant, and I’d love to see Sega make another attempt at really showcasing Sonic Adventure’s best ideas.

Tom Kyzivat: It’s extremely hard for me to choose only one, and there’s no way I can do it concisely, so here’s a quick list (as quick as I can make it) of which ones I’d like to see:

Stardust Speedway Zone (Sonic CD): I loved the brass horn motif for this level, and it would be cool to see it in three dimensions, and maybe with the concept pushed further to include more brass instrument parts and even other symphony instruments. Plus, I thought the music for this level really set the tone and gave it a great feel.

Collision Chaos Zone (Sonic CD): even though this is a relatively bare bones version of fan favorites like Casino Night Zone, I love the 80s/90s arcade feel of this level’s look and feel, like the hot pink and neon lights. Equally as cool would be the level it’s based on: Spring Yard Zone from Sonic 1, which had a really cool, abstract, surreal billiards feel.

Windy Valley Zone (Sonic Adventure): even though for the most part I’d like to see 2D levels transformed into 3D, this is my favorite level from the Sonic Adventure series, with its insane loops and great sense of height and scale (and windmills!).

Y’know what? Just do EVERY level!!!

Alex Riggen: I really want to see a re-imagining of Emerald Coast from Sonic Adventure. I still have fond memories of playing that level for the first time the day I purchased my Dreamcast. I don’t think I’ve played any level in a Sonic game more than that one as I constantly replayed it trying to get the highest ranking and collect animals to give to my Chao. Sure, as the game went on the poor controls and collision detection started to show but that first level was everything I hoped it be. To see it all redone with even better visuals and in 2D form would make me a very happy Dreamcast fan.

So I’ve been thinking about this one for awhile. I finally stumbled upon Sandopolis Zone from Sonic and Knuckles. This level originally was way to long and could be obtusely difficult at times. However it had some unique mechanics that I would love to see revisited.

The boss in the first level always sticks out in my memory. It wasn’t the traditional hit eight times and it dies kind of boss. You had to basically trick the boss into killing itself. By kiting it into a huge quicksand pit. As I kid I remember spending an hour or so trying to kill him using traditional methods to no avail. Then by accident I saw him take that faithful plunge into oblivion and I watched in awe as the boss defeated himself. I haven’t seen another Sonic boss do something like that and I would really love to see the concept revisited.

In the second act you were inside of a tomb. There were ghosts all over the place that followed you around. Strewn throughout the levels were light switches. If you hit one the lights would come on and the ghosts would come back. However the lights would slowly turn back off again. When they were completely off the ghost would come back and wreck you. This constant fluctuation of light caused a great feeling of tension. Something that can be sometimes lacking in Sonic 2d level. I would love them to revisit this.

Aliens Infestation 25% off at Amazon.com

Sonic Generations gets a launch trailer