Recently it seems that the old school Sega brawlers of old have made a somewhat big comeback. With various independent developers taking homage to classics such as Golden Axe, Altered Beast and Streets of Rage. The Asskickers (which comes to us courtesy of French studio AGO Games) is a title that indeed does pay homage to these games, especially including the aforementioned Streets of Rage. But taking away the retro and nostalgia factors how does The Asskickers actually hold up?

Well hit the jump to see if The Asskickers really does kick ass.

The gameplay is what you probably have come to expect from the beat em up genre. That is scrolling to the right and beating up everything or anyone that gets in the way of your progress. To help you the game has three different characters to choose from. Alex, who is the most well rounded character of he bunch. Diane, who is the fastest, but weakest. And Marcus, a strong but slow brute. Personally I found it hard to use anyone but Marcus as the other characters weren’t quite strong enough, and sporting Marcus actually gave me a fighting chance. But not in an hard core difficulty kind of way, more of a ‘frustrating glitch’ kind of way. 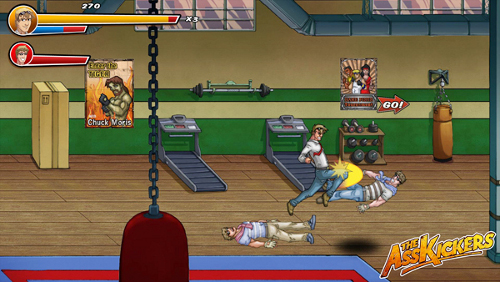 On that note, the common enemies in this game behave in very annoying ways. For example many times during the game they tend to wander off screen, making it hard to actually fight them and progress. In fact I actually had to turn off the game at one point since a bad guy just walked out of my field of vision and refused to come back. I couldn’t actually do anything and was then stuck until I reset the game and came back to it later. It’s very annoying mistakes like this which made my experience with The Asskickers quite irritating.

The bosses aren’t that memorable either to be honest. For example after I struggled through the first stage, my reward was a boss who dispatched the same bad guys I had been fighting through the first stage to beat me up, and didn’t put up a fight himself. This was a sad moment for me as I remember each Sega brawler of the past at least had some memorable fights to look forward to. 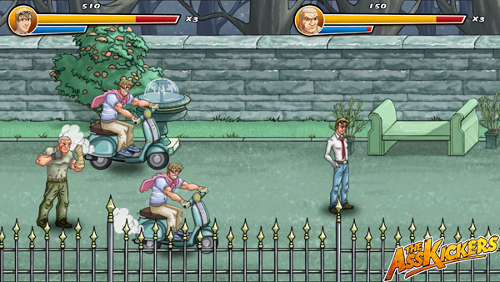 The controls themselves were fine. However using a keyboard to play a retro inspired brawler like this was really awkward. Fortunately if you do own an alternate controller or joystick you can configure that into the game. But to those of us stuck with keyboard controls, you may find the game more awkward then intended. 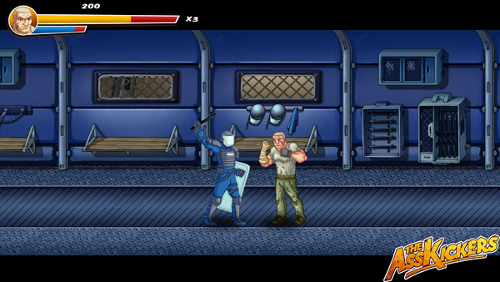 The game itself does a pretty good job of emulating the atmosphere and arcade styled fun of the early Sega Mega Drive brawlers we all know and love. Unfortunately the game’s many faults stop it from becoming a perfect homage. One of these many faults is the way the story gets in the way of the mindless fun. At the beginning of each stage there are many unskippable text boxes that get in the way of the actual gameplay. This is made even more annoying when you are sent back to the very beginning of the level at the last second and still have to sit through the dialogue sequences.

And yes you read that right, from what I played there were no checkpoints in the game. This is a real shame as even in the most hard core of beam em ups, you could continue right where you died after using a continue. however in this game using a continue means being sent to the very beginning. And this is on the easiest setting, mind you. Harder modes don’t even allow you to save in between stages. Apparently taking breaks in between levels is not a luxury for the hard core. 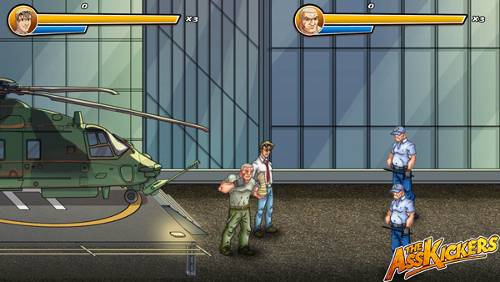 One of the more positive things about The Asskickers however is it’s prominent sense of humour. I can honestly say that the game did make me laugh at least once. Be it Teenage Mutant Ninja Turtles styled speech bubbles insulting my foes as I beat them up, or humorous meme based posters there might be something to at least get a chuckle out of you. This of course doesn’t make up for the frustrating or annoying gameplay, but it is a feature that stops the game from being a completely generic brawler.

If you do buy the game there are many other modes to play around with, including a time attack mode and an achievement system to keep collectors occupied. Unfortunately for me these just didn’t work for me as I found the core game to be quite sub-standard. 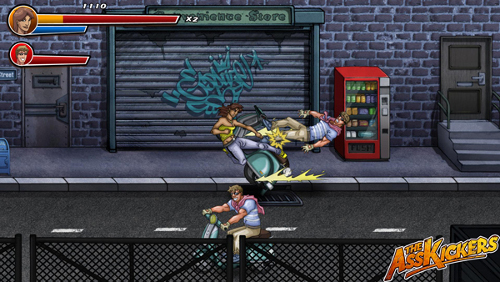 However the main deal breaker with The Asskickers is that it didn’t really explain to me how to play. I know it’s a brawler and that everything should be obvious but there is a weird system involving super moves that isn’t really explained. I even checked the controls list but I still couldn’t find a way to execute them. If I didn’t somehow trigger one I wouldn’t have even known they were in the game.

Overall because of the previously mentioned faults. The Asskickers is a lesser game than it really deserves to be. At $10 it may be cheap, but there are still a lot of more polished brawlers out there on the market.

The Asskickers gets a C-