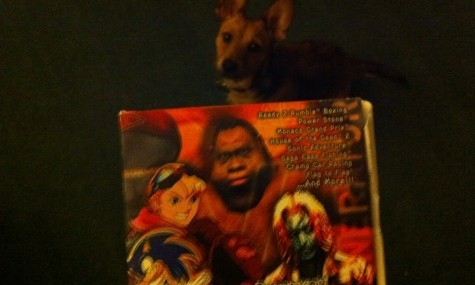 What better way to kick off a celebration of the greatest console of all time than with the pack-in demo disc?  Sure, I’ll inevitably be playing a ton of these games down the road, but I just had to get my feet wet while triggering some of my fondest Dreamcast memories.  To this day, I still occasionally think back to when I dragged my mom into my room just to show her the amazing visuals of Ready 2 Rumble.  She tried her hardest to care. Bless her.

I hate to say it, but Ready 2 Rumble just doesn’t hold up all that well today.  While it does hold true to the old Dreamcast pick-up-and-play sensibility, it’s a hell of a lot more Facebreaker than it is Punch Out!!.  After getting my ass handed to me, I played Sonic Adventure’s demo level (still love it), Sega Bass Fishing (John, why the hell do you like this thing?) and House of the Dead 2 (oodles of fun, even without a gun!!!)

After that, I played a little bit of Charge N’ Blast.  Lordy, that thing should have stayed in the arcade.  I picked it up out of morbid curiosity ages ago, and this is the first time I’ve spent more than ten minutes with it.  Even with my arcade filter glasses on, this thing is still dragging and bland as crap.  It’s like a precursor to Earth Defense Force, except with barebones gameplay and asscrapstupid visuals.  Ugh.  On to something good. Something called food for my gullet.  PIZZA!

I think I might go for something I know I’ll love next…  JOJO’S BIZARRE MOFO ADVENTURE, MOFO!