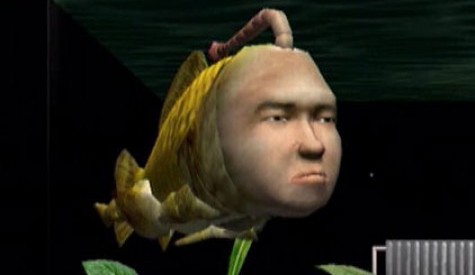 Welcome back to the future, everybody.

For the past couple of hours, I’ve been staving off slumber with two of my favorite action-packed Dreamcast titles of all time, and one gruesome stomach-churning nightmare game. Like Momma always said — There ain’t nothing that’ll keep you up like excitement and sheer terror.

Ikaruge didn’t last long, which is no surprise. The game itself is less than an hour long, and I would be lucky if I could get more than a quarter through it.  I played the same few areas three or four times, then moved on to a shooter that’s a hell of a lot more forgiving – Cannon Spike.  For those of you who haven’t had the chance to play this uber-rare masterpiece, Cannon Spike is a cross between a shmup and an old school beat-em-up.  You can play as some of Capcom’s most well known characters, including Cammie from Street Fighter and even the Blue Bomber himself, Mega Man.  I adore this game, despite its painfully short length and woefully barebones gameplay.  Like so many other games utilizing the NAOMI hardware, Cannon Spike is a brief explosion of joy with a learning curve of near-zero.  While it gets almost too easy at several points, its an awesome way to burn an hour or two (especially if you’ve got a friend to play with).

After that, I picked up a game that has aged better than almost any other game in the Dreamcast library — The Typing of the Dead.  This game is wildly entertaining, and I don’t just mean that because of its satisfyingly self-aware camp sensibilities.  Everything was done right with this thing — Dreamcasts as backpacks on the characters, sentence prompts whose hilarity never ceases to amaze, fun and fast-paced typing that occasionally switches it up to keep things genuinely interesting.  I had a hard time putting this down, as I always do. Maybe it’s because I’m such a loud bastard who likes redundant run-on sentences and also talking too much as well.

After a refreshing cup of joe, I picked up a horrifying little title called “Seaman.”  When I was a kid, I adored this thing.  I proudly displayed it to my family, and they just looked at me with sincere concern written all over their faces.  Now, I realize why. I just watched an egg explode into a group of semen-looking babies composed of a single eyeball encased in a thin sperm-ish coating.  I witnessed a mollusk consume these eyeball-babies, one by one. I Witnessed the mollusk belch blood, then explode, spitting out a handful of human-faced fish…  I’m glad this marathon goes for 24 hours, because I’m not sleeping for a week.  I guess I’ll be checking in on my Seamen as the marathon continues… If I can stand it.
For the record, I’m not tired at all yet.  I’m stunned at how much good that coffee did.  I’m now ready to dig into the first Power Stone before I go to work.

That’s right — unfortunately, I could not get out of work today. But you still have John to play with! Don’t worry, he’s wearing his ankle bracelet, so he can’t hurt you. I will be posting my next post at about 1PM, but I will be playing games up between now and 7:30 Eastern. Don’t worry, I ain’t ditching you yet.

Here’s a recap so far: