Renegade Ops was a game that just popped out of nowhere for me. With all to go on but one simple logo, it was very hard to tell what kind of game it was going to turn out as. This didn’t last long as videos of an fun and fast paced twin stick shooter surfaced. And from then on I was very interested as to how this downloadable Sega published title would turn out.

So recently, John Doherty, Josh Newey and I, sat down to play together. And while we recorded our initial reactions on an upcoming podcast, what did we all think after the smoke had cleared? How did this new Sega/ Avalanche studios venture turn out? You can find out all this and more, after the jump as we all take turns to review Renegade Ops.

The pulpy comic book presentation of Renegade Ops is probably the game’s most ubiquitous asset.  Even with its laughably meager story, the poe faced universe that Avalanche has created is appealingly unapologetic in its celebration of the grizzled machismo of 80s cartoons. The story is told via vibrant (though admittedly sparse) comic book-style frames and dialogue boxes. The character roster ticks all of the expected boxes in reaching its quota of action clichés. While all of this does threaten to make the game’s mythology come off as a bit flimsy and forgettable, Avalanche’s unpretentious commitment to the balls-out action of these Saturday morning tropes is far too entertaining and exciting to make the game bland or tired. 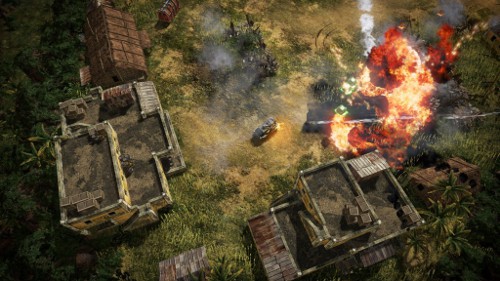 This is largely thanks to Renegade Ops‘ stunning in-game visuals.  Environments are varied, incredibly lush and intricately detailed, especially for a downloadable title. Details like flocks of birds overhead, puffs of dust kicked up in your wake, and even bloody tire tracks where enemy soldiers once stood all accent the already exciting display of non-stop explosions around you.

These enthralling explosions are arguably Renegade Ops‘ most significant visual achievement. There was hardly a moment where Stevie, John and I weren’t screaming at the tops of our lungs, overjoyed at the constant inferno being stamped into our eye sockets.  Even the most mundane moments like leveling up are infused with a visual flare that makes it hard not to smile like an idiot. This constant visual reward makes raiding towns and defeating enemies exceptionally satisfying, as some of the larger and more demanding battles end in fiery retribution that is more memorable than anything I’ve experienced from a downloadable title in years. 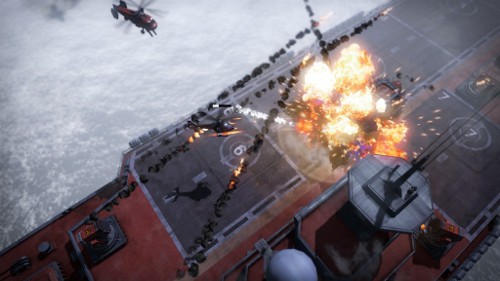 The semi-linear approach that Avalanche chose to employ for their level design works both as a benefit and a deterrent to the game’s action-packed flow. From time to time, players must navigate some niggling stretches of road to get to the next enemy camp. Even though the driving mechanics are entertaining enough on their own that navigating these areas isn’t too much of a chore, the action is undeniably deflated when the incentive of explosions and damage streak points is stripped away.  Secondary missions do offer a little bit more to deter the player, though the constant risk of running out of time will inspire most to follow a pretty straight path to the next primary objective.

Renegade Ops is an unabashed salute to the over-the-top action cartoons and videogames of yore.  Its addictive perk system and explosive combat more than make up for a relatively unbalanced difficulty and mildly disappointing damage combo system.  A-

As Josh had mentioned earlier, the story is styled after various ‘extreme’ comic books and cartoons of the 90’s. This is not only evident in the style of which the story is told, but the actual situations and plot themselves. The story could be taken out and put in any regular episode of G.I. Joe and you probably wouldn’t even notice a difference in tone. From laughably ‘over evil’ villains like the gloriously cheesy ‘Inferno’ to his ancient treasure stealing antics the story is worth keeping an eye on for a quick dose of silly action packed nostalgia. The story can however get bothersome in a multiplayer game. I found myself skipping most of the cut scenes here because with friends, you just want to get to the action.

The gameplay of Renegade Ops is nothing special in itself. It’s just any above standard twin stick shooter with RPG elements and perks. However when you are speeding around levels constantly being rewarded for taking part, it’s easy to ignore that this may not be the most original game ever made. However it is one of the most fun experiences I have ever had playing this type of game. Renegade Ops is simply unashamed of what it is, and that is a really fun campy action game. This blasts what was previously a generic twin stick game into one of the best examples of the genre. 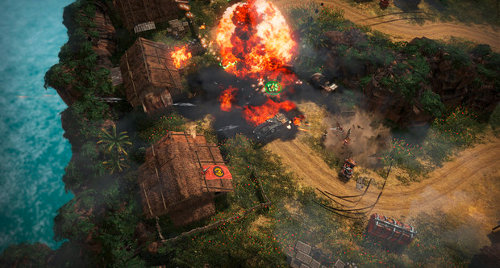 My only real problem with the game is that it sort of ends on a whimper. After a ton of fantastic set pieces the last boss (while hard) isn’t as over the top or ‘extreme’ as I was expecting this game’s final encounter to be. This does let the game down considerably when the rest of the game is so fast and (for lack of a better word) ‘epic’.

The controls themselves are nice and fluid. Although the cars take a while to get used to it becomes very intuitive and fun to explore the vast landscapes the world throws at you. The controls reminded me the most of Sega Mega Drive classic Micro Machines, which in my book had one of the best driving control schemes of all time. And any game that invokes that is awesome in my book. This together with the perks system gives you new and exciting ways to blow things up, which keeps the game’s pace fast and action-packed.

In my opinion Renegade Ops is what is it. And that is a fun as hell twin stick shooter which is never dull, not even for a moment. If only the ending were as awesome as the rest of the game. B+ 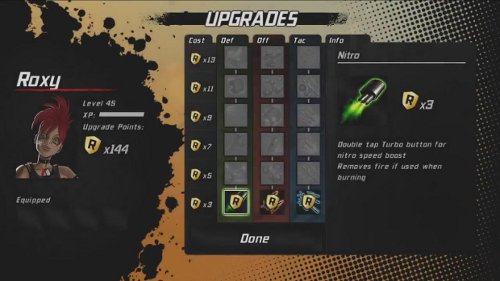 Renegade Ops‘ arcade style of action mixed with it’s RPG inspired perks system leads to a highly re-playable game. The levels are varied and filled with side missions to keep a player occupied. Every time I play a level over again I discover new areas of the map I haven’t seen before. The game features four different characters all with their own unique abilities. As you play each one you can unlock perks for them which evolve their game play to new extremes. Combine all of this with the highly addictive co op and you have a game with near limitless re-playability. I do wish that there was more game modes or difficulty levels to further round out the experience, but the game is absolutely complete without this. 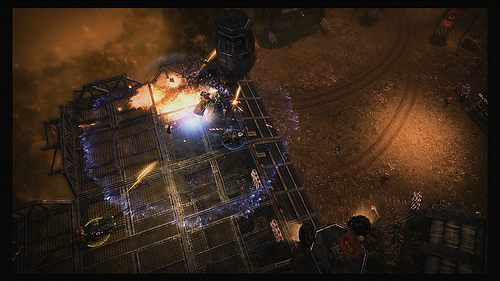 When it comes to value Renegade Ops can’t be beat. Nine high action levels take you from the jungle, to an ancient temple, and even the planes of Africa. leveling each of the four characters to max level will take you quite some time, and you will enjoy every second of it. The game can easily provide 30+ hours of explosive entertainment. As far as download games go, Renegade Ops provides much more content for the price than the rest.

Renegade Ops’ is the new king of download games. It’s fast paced action mixed with the RPG inspired perk system lead to a highly addictive, always entertaining experience. Renegade Ops gets an A-

Sega vs Capcom, Part XIX: Rock Out With Your Socks Out!