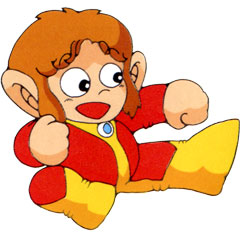 Alex Kidd, considered by many to be the first mascot of Sega, celebrates his 25th birthday today. His first game, Alex Kidd in Miracle World, came out on November 1st, 1986 in Japan for the Sega Master System. While he hasn’t had a new game since 1990, he has been included in recent games like Sega Superstars Tennis and Sonic and Sega All-Star racing. If you have missed out on his games so far, they are available on services like the Virtual Console and collections like the Ultimate Sega Genesis Collection.

We here at Sega-Addicts love Alex Kidd, which should be obvious, since our founder, Alex Riggen, has been, according to legend, named after the little hero! Happy Birthday, Alex Kidd!