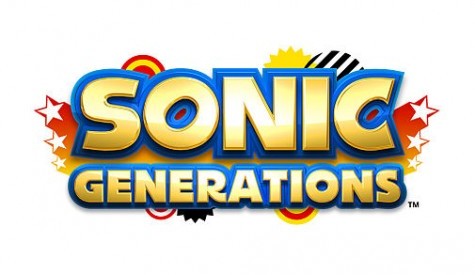 Over the years, these laughably inspirational words from Sonic Adventure 2’s theme song transformed into a brutally ironic comment on the increasingly sad state of the Sonic franchise.. Year after year, we gleefully anticipated Sonic’s next chance at the plate, and year after year, we found ourselves bound in the defeated throes of betrayal as we threw out yet another broken controller.

But over the course of the last few years, even the most disillusioned fans have had to admit that something has been changing. Sonic’s last few titles have been bringing him closer and closer to that sweet spot we’ve been promised, even if frustrating level design and familiar niggling flaws continued to give ‘Sonic Cycle’ enthusiasts something to complain about.

Fast-forward to the release of Sonic Generations. Bent on achieving the impossible task of pleasing hardcore retro fans and 3D Sonic-philes alike, Sega has embraced both classic and modern Sonic gameplay within one game. With a record number of pre-orders and a watershed 20th birthday release date, this could be the perfect chance for Sonic Team to prove that they have truly ‘learned from the works of yesterday.’

The question is: have they? 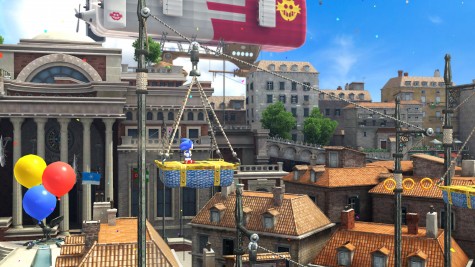 I knew Sonic Generations and I were going to get along well when, in one short cut-scene, Sega made the two story book games and the Jaleel White cartoon canon. If Sega was going to be that deft in tweaking their fanbase, then I knew that this game had a great deal of thought put into it.

Sonic Generations has made the Blue Blur is relavant again. The uneven, gimmicky gameplay that has plagued Sonic for ten years is gone, replaced by solid gameplay, well built levels, and excellent production values.

It’s not a perfect game. There are a few instances of lag and while the unfair death count stays low, you will get frustrated from time to time. Also, the level selection (a collection of remixed stages from the nine main line Sonic titles) feels a little hit-or-miss, but this problem is practically built into the premise of the game.

Sonic Generations is both a great return to form for an icon of gaming and an outstanding celebration of twenty fast paced years. It is not a perfect game but it should prove to be a real crowd pleaser. 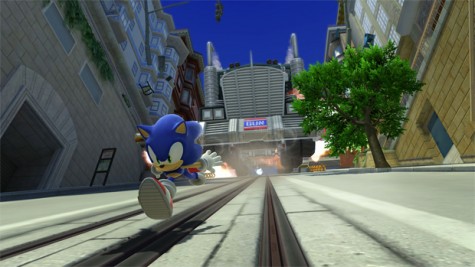 I will admit that I was terrified when Sonic Generations was first announced. I was terrified of the Sonic Cycle repeating itself on what could be the perfect redemption game after a laundry list of travesties from Sega. With each ounce of excitement, my brain continually tried to stop the Sega fanboy inside from getting out of control. The fan-boy took a backseat, until the day I bought Sonic Generations, at which point I played through almost half the game in one sitting. Sonic the Hedgehog is back.

From the beginning of Sonic Generations, the childhood charm and vibrant atmosphere of the Genesis days is captured immediately and introduces a ridiculous story just for the sake of going on an adventure. I was relieved to see that Sonic was not going on another “epic RPG quest.” A giant enemy is threatening all of the world and time, and Sonic needs to step in and clean up the mess before the world ends. This is all we need in a Sonic game, and it was a breath of fresh air to see the story unfold as colorfully as it began.

The controls in Sonic Generation as Classic Sonic feel very solid, and I actually prefer pressing just one button to spin dash, although I still found myself “revving up” more than necessary to simply add intensity. Controlling Modern Sonic felt more fluid than it ever has in a 3D Sonic game to date, and I believe we have Sonic Unleashed and Sonic Colors to thank as the guinea pigs. The ability to run freely as opposed to being “on rails” when the camera followed behind Modern Sonic felt very natural. I did still find myself falling in the common death pit but that was usually due to my distraction of the beautiful background.

The pacing of Sonic Generations is a bit of a mixed bag with every zone being relatively easy and straight-forward until being confronted by a boss level that may take a few attempts to conquer. Slow boss patterns and random clipping errors caused a good bit of frustration until I was able to navigate past them, but this did not take away from the overall joy of the game. After each zone is completed, a plethora of challenge courses open up, which will provide hours of replay value while racking up skill-points in the process. There is plenty to do in Sonic Generations even after completing the main story.

Sonic Generations is not the perfect Sonic game, but it is the absolute closest we have come in the last decade and a half. I can only hope that Sega uses Sonic Generations as the blueprints for every Sonic game to come, and will only continue to improve upon it. Welcome back, Sonic.

Going into Sonic Generations, I had the highest of hopes. After putting several hours into speed-running the demo, as well as being one of those apparently rare people who really enjoyed Unleashed, I expected a lot out of this game. And fortunately, I can say those expectations were met.

If they wanted to end the Sonic series right here, I would honestly have no objections. The twenty-years-in-the-making fanservicey love letter to the blue blur is a fantastic game on nearly every level. While the Hedgehog Engine hasn’t improved too much since Unleashed, the stages look incredibly detailed and cool, and the Sonics are well animated, with Classic making the jump to 3D far better than I ever expected. The soundtrack is also excellent, on par with Colors’ music, with only a couple real disappointments in the track list (Planet Wisp Modern seems very phoned in, as does Silver’s boss fight theme).

As far as gameplay goes, this is the best Sonic has felt since the Genesis games. Classic, while a bit floatier than we’re all used to, is as close to perfection as we’re going to get with him in 2011, and makes it very hard to go back to the Sonic 4 play style. However, in my opinion, I honestly believe Modern Sonic is the true standout here. While getting used to the new control format, coming in from Unleashed, took a little time, once I got the hang of that I was having a blast burning through levels. To me, it almost feels like Classic Sonic is an afterthought compared to Modern.

And honestly, there isn’t an exceptionally bad main stage in the game. Seaside Hill Modern wasn’t exactly fun the first few times, and Crisis City Classic and Planet Wisp will tear you a new one if you aren’t careful, but as far as being “forget this I’m never playing this level again” bad goes, none of them reach that level. Also, the idea that they took a level from one of the worst games ever made (Crisis City Modern from Sonic 06), and made it one of the most fun in the game is a huge testament to how far Sega has come back with this series in five years.

My only complaints are that some of the challenges can be a bit cheap (the Rooftop Run balloon challenge as Classic was very prone to ignoring your mercy invincibility), and, on the other hand, the game almost felt TOO easy in a way. A couple of the levels are quite challenging, but when you can still S rank Green Hill after spending four minutes just messing around and deliberately getting hit and taking slow paths, there’s a problem.

Aside from some issues in difficulty, I think Sega’s finally nailed Sonic again, and I’d easily recommend this game to anyone. I can’t wait to see what’s next for the series. 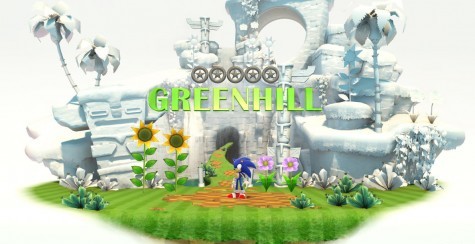 From the moment you first enter the game’s elegant hubworld, it’s immediately obvious just how much simplicity plays a role in Sonic Generations. Set on a crisp white background, the map is splayed out in 2D, allowing Sonic to bolt from one stage to another. Each of these stages are represented by their own gorgeous, intricately-detailed tableaus, displayed in a way that pays tribute to each moment in Sonic’s history as its own portrait in time. For each stage you pass, an attractively understated and elegant version of that stage’s theme plays, adding an extra layer of charming identity to these loveable little worlds.

For the first time in ages, the level design and gameplay of a new Sonic game compliment each other perfectly. Navigating stages is a blast, mixing Sonic’s mainstays of speed and nimble navigation with the liberal smattering of exploration that we’ve been lacking for some time now. Classic Sonic’s stages utilize a familiar and forgiving multi-layered format, inspiring players to search for brand new avenues and areas every time they play a stage. Modern Sonic does the same, but replaces free exploration with constantly and sometimes discreetly branching paths. This is key to what makes Sonic Generations work, as it illustrates, to me at least, that Sonic’s developers are finally realizing that straight-forward speed and excitement isn’t all that makes the blue hero work – it’s his sense of adventure.

This isn’t to say that all of Modern Sonic’s well-documented flaws have finally disappeared. A small handful of stages intermittently remind us of what still needs to be repaired in the series. Sonic is still way too reliant on his homing attack, and while the expected moments of “how was I supposed to be prepared for that?” or “that’s NOT what I was targeting!” happen way less, they are still glaring at times. Stages like Planet Wisp, Seaside Hill, and Crisis City definitely inspire their fair share of aggravation. The switching between Modern and Classic Sonic can also exacerbate this, as the simple control scheme of both versions makes it easy to accidentally attempt a move from the other control scheme. There’s nothing more annoying than trying to spin dash as Modern Sonic and inadvertently hurling yourself off the edge. 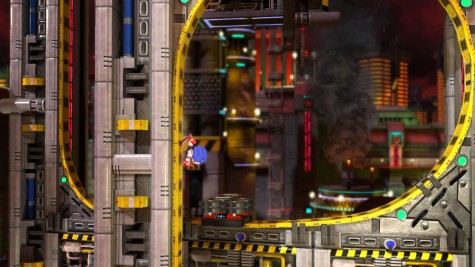 Padding out the slim campaign is a series of hit-or-miss side challenges. At first, I shrugged these off as unnecessary fluff meant to flesh out an admittedly short running time, but I’m delighted to admit that for the most part, I was wrong. Yes, the very worst of these do feel rather tacked on, but the very best are varied, completely reconstruct stages made up of tributes to some of the most unsung pieces of Sonic games. My personal favorite has you juggling Sonic’s ending sign post across the entire stage.

Even with its flaws in mind, I have to say that the overall package of Sonic Generations works in a way we haven’t seen in years. The game is noticeably short (most could finish it in a couple of sittings), but the replay value of some of the better stages, coupled with a handful of the surprisingly clever (if occasionally frustrating) challenges, will have hardcore Sega fans playing this for weeks to come. Once again, we have reason to be proud of standing behind this blue spiky hero.

The difficulty may be stunted, and Modern Sonic may still need a little bit of tweaking, but the polish, attention to detail, and consistently thrilling level design in this game bodes very well for the future of the series.

Check out these pics from the Sega Gamescom booth