Mario & Sonic at the London 2012 Olympic Games may have the longest game name in history. That’s not the only thing about it that puts it into history books. This is a sequel to a game that featured gaming’s biggest super stars in one game for the first time ever. How does the game hold up to it’s historical significance? Well you will just have to hit the jump and see!

Mario & Sonic is essentially a mini games collection. It features over thirty mini games all based on the Olympics. If mini game games ( I may have just made that up ) are your thing then there is a lot of content here to get through. However as someone who generally doesn’t enjoy them it can be a harder sell. The games themselves are very hit or miss. They vary from quite simple and intuitive to control like the Hammer Throw, to inanely difficult to understand, like the Discus Throw. What complicates the problem even further is the games hint system. I know what you’re thinking, how could hints be confusing? Well this game is fond of giving you hints to the event, after you’ve played the event. It’s really frustrating and downright annoying.

The game also features something they call Dream Games. These are games that are based less on the Olympics, and based completely on the world the characters come from. These overall were a blast to do. You can either fly through Mario Galaxy with your friends to defeat a Dino Piranha, or swing along poles through Metropolis. Either way these games felt more original in design and were the high points of the experience for me.

Visually the game is a mixed bag. Some may say, “well it’s on the Wii, duh it doesn’t look good.” However this is certainly not the case for the Wii. Some games are absolutely gorgeous on the system. The in-game models all look great and the arenas are decent enough, but the amount of screen tearing around the objects will really make your head hurt at times. It’s very bright and quite charming looking despite this however and honestly I was expecting much worse. I would like to talk about how awesome looking the opening cinematic is. It is essentially a longer version of this trailer we saw some time ago, but has even more events and more characters to look at. 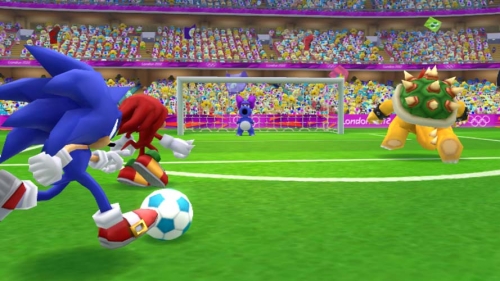 Speaking of looking at characters, I was quite happy with the cast they selected. It may be the same characters that are always used in these kind of games, but I like those guys so no complaints here. Some of the most fun I had was picking what characters to use for what event. They all have their own unique stats that make certain people better at certain things. It was also enjoyable to do things like pick Shadow for Shooting, or Tails for Synchronized Swimming. 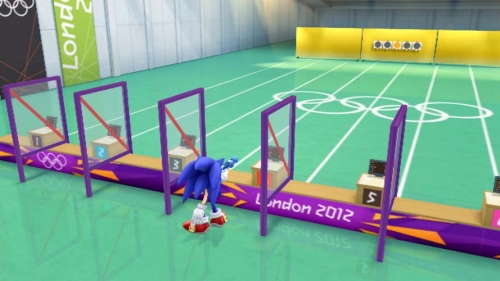 The game features a lot of things other than Olympic events to keep the player occupied. Every time you compete in an event you get a scratcher ticket. These can be scratched later for prizes such as songs or Mii outfits. However if you don’t win anything with them you can turn in the old ones for the same prizes anyways. There is a lot of songs to be unlocked from both Mario and Sonics history and was a completely welcomed surprise.

The game also features something called London Party. London Party pits four people against each other to explore London top-down and participate in mini-games to collect stickers. The first person to collect a certain amount of stickers wins. Is this starting to sound familiar? This mode is essentially a reboot of Sonic Shuffle and it’s about as enjoyable as that game. The mini-games are either boring or frustrating. The controls are also very sluggish in the top down sections which make it difficult to navigate through the world. The whole experience reeks of an afterthought and you would do well to just avoid it altogether.

I don’t want this to sound  overly negative however. At it’s core Mario & Sonic is a great game, but it’s not a game for me. This game is definitely for an audience that either has kids or is a kid, and it’s a great game for those consumers. You can tell that a lot of love and care went into making this game and London Party aside it always feels fun.

Does it have problems? Yes. However as a no nonsense pick up and play a bit with friends game it executes quite well. Mario & Sonic at the London 2012 Olympic Games gets a B-.