For all of the PC gamers out there who are also Sega fans, this one’s for you! It’s amazing to me that I have somehow not gotten into this series. Not only is this game published by Sega, but it’s also on the PC? I should have been all over this ages ago. Unfortunately this is not the case. The review you are about to enjoy, because it’s so amazingly written, is from the perspective of an outsider to the series. So hit that jump button and read our review of Shogun 2: Fall of the Samurai.

Shogun 2: Fall of the Samurai is a new campaign setting for Sega’s hit Shogun 2. It is set in a time period later than that of the Shogun 2, more specifically it starts in the year 1864 when tension began to build between the East and the West. This later time period causes the game to include technologies not seen in the first Shogun 2, including Railroads and Gatling Guns. The game also includes six new playable clans for the player to play as.

That’s enough history talk though–let’s talks about where Fall of the Samurai succeeds and fails. As a PC Gamer who somehow missed the boat on the Total War franchise it can be a daunting game to start. The sheer amount of content and micro management the game has can be near impossible to understand when first starting out. This isn’t helped by the games tutorial system. The game attempts to teach you as you play by using voiceovers to explain the different aspects of the game. This system seems great for someone who is familiar enough with the genre and its set of expectations of play; however for players like me who are coming to it with no expectations it doesn’t really help to shed light on its mechanics. The game does have what it calls the “Encyclopaedia,” which is a massive Wiki on all of the different aspects. This is an amazing tool but it also falls into the same trap as the voiceovers: I feel like it was designed with fans of the genre in mind as opposed to new players. However after studying the Encyclopaedia and following the voiceovers I felt much better about tackling the game.

So let’s talk about the game. The game does an amazing job of putting you in control of a Clan trying to take control of other territories in order to cement your rule. The amount of content other than just beating on your enemies is awe inspiring. In between combat, which is a very large portion of the game, you try to govern you Clan in order to grow in prosperity. This includes things like growing and maintaining a strong economy, ensuring trade with other clans, and a huge amount of political dealings from strong arming weaker clans into obedience and negotiating peace treaties with stronger ones. It truly is the ultimate simulation for anyone who wants to rule a Japanese clan circa 1860’s.

Now it’s time for the juicy bits–the combat systems. The depths of the combat mechanics are unparalleled. In other games with similar combat systems you only need to send a ton of your best troops at the target and it will eventually fall. This was not the case here. I attempted the famous “Zerg Rush” in my first few fights and immediately got the smack put down on my army. It was only after I tried strategically attacking my enemies’ forces that I was beginning to see any sort of success. It is also really important to make sure that your armies forces are a well balanced mix of types. They all have a very defined role in combat and I have yet to find a unit that didn’t feel important. Learning to use all of their strengths in battle and how to counter your enemies’ forces is a huge part of the learning curve, one I’m still perfecting. Normally I would be put off by this sort of depth, but in this game it feels so right. Given how incredibly vast the rest of the systems are outside of combat, it would feel very shallow to not have an equally vast combat system. Everything goes in the combat as well. There is a Shinobi unit in the game who you can send in before a battle to sabotage the enemies’ defenses, making your attacks easier. Things like this all reiterate just how much simulation is occurring at anytime.

The intensity of the battles is really brought home by the graphics. I lost a few fights because I was too busy zooming in as far as I could and watching the action unfold. The animations are beautifully choreographed and seem very realistic for the time. I endlessly enjoyed killing units who were mounted on horseback, and watching the horses run away from the battle when their owners met their demise. It’s unfortunate that the out-of-combat graphics aren’t as amazingly done. They are not bad by any means but they don’t have the same little touches that the combat graphics do, and this juxtaposition leaves them feeling a little dull. The game has DX11 support which really cranks up the quality. This is a huge hog on your machine and will probably only be enjoyed by those with the best rigs around.

The game’s audio design really sets the tone for Japan of the time period. The music seems very traditional and complements the out-of-combat actions very nicely. The battle music is intense and really gets the blood pumping while still maintaining its traditional feeling. They did a great job pairing the amazing animations with equally impressive sound effects, which really brings the action home. The voiceover work unfortunately is hit or miss. When it’s right it feels very authentic and helps you define the characters, but when it’s wrong it feels like super cheesy Kung Foo action movie dialogue.

Now I’m no expert on the time of yore in Japan, but this game is incredibly realistic. You can tell by playing it how much research went into simulating the time period. This in conjunction with the intense simulation makes Shogun 2 and its expansions the end all be all Japanese Clan management simulation for the time period.

Reviewing this game is very difficult for me for a few reasons, the biggest being it’s immense size. This is easily one of the largest non MMO games I have ever played in terms of content. There are so many game play mechanics and they are all so incredibly robust that it would take me months to become an expert on them all. This leads into my second point that this genre has just never been my cup of tea. I think that its biggest strength, the sheer immensity of size, is also its biggest weakness. 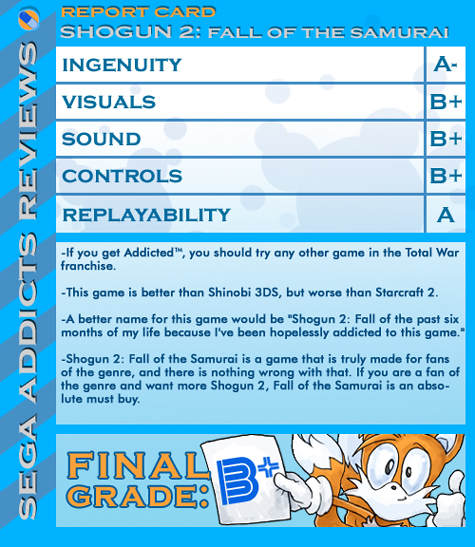