In 2007 Zoe Mode released Crush on the PSP with the help of Sega. With the PSP in it’s (fairly) early days the game unfortunately and slowly disappeared into the abyss of early PSP games that weren’t appreciated in their time. However the story didn’t end at that point and Sega has given Crush another chance to shine!

That’s right–a re-release of Crush for the PSP was announced and is out right now in the UK and soon in the USA. But is this port worth it? Does the 3D make the game better due to it’s perspective based gameplay or is Crush 3D doomed to the same fate as it’s PSP counterpart? Hit the jump to find out!

For those of you who haven’t played the original Crush, the point of the game is to explore a 3D puzzle based world and ‘crush’ the environment into 2D to progress. It’s hard to explain in text but if you can imagine all the walls in a 3D game being flattened you basically have the premise of Crush and Crush 3D. This works well and you can crush the environments from any angle you please, allowing access for you to collect more trinkets and achieve your goal. It’s an original premise that hasn’t been used really at all in gaming and is definitely worth a look at if you’re keen on exploring weird new game mechanics. Thankfully the controls are tight and work perfectly, making the premise easy to grip once you’ve wrapped your mind around the mind boggling concept.

However this would be moot if the game didn’t work with the puzzles or the levels themselves. The gameplay seems to rely on disorientating stages that look more complex than they actually are. And whilst the fun depends on figuring out the Escher esque and surrealist like structures it can take a while to wrap your head around what or where you’re supposed to go or do. Suffice to say this is a game you really have to be engaged in 100% to proceed in. A game which requires a lot of attention and thought, and a type of game which really doesn’t always work on a hand-held thanks to outside interaction. 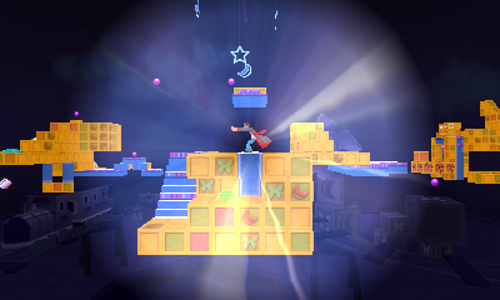 The game is itself divided into 4 main worlds. But apart from the backgrounds you can hardly see the difference. In this way it seems like the story is really trying to cram itself into the main gameplay. The style of this game in a way was definitely secondary to the story and presentation.

Crush 3D can get annoyingly hard at times but the game does have a hint system to keep things easy and light. The hints range from vague tips to outright instructions on how to complete a stage. However Crush 3D does not let you get away with this and will deduct points if you have to resort to this. And points are important as the more marbles you collect, the more stuff you get to unlock. There’s even a progression bar for the game to help you see how close you are to that elusive 100%. However I did not see the appeal in this. Once a level is completed I didn’t exactly feel the need to go back and get anything I missed. The game really does count on everything being new and fresh which doesn’t make for good re-playability. 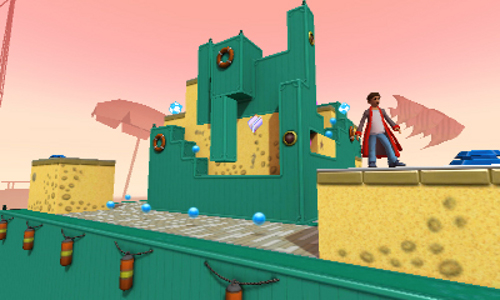 It’s also worth saying that to the best of my knowledge Crush 3D is just a straight up port. While some minor aesthetic details may have been changed the levels are exact copies of what you’ve played in the original PSP game. Suffice to say Crush 3D is a game for newcomers and not for veteran Crush fans.

Being a remake the visuals have been upgraded and changed, but not in the way you think. You see Crush 3D is actually lighter in tone than the original. The story is changed, from a dark tale of an insomniac confronting his dark twisted mind, to this new story about a normal boy being trapped in a wacky computers dream-scape, which he has to tidy up. The new dialogue shows this as the doctor and Danny, the main protagonist often engage in humorous banter between levels. This isn’t a critique per-say, but if you really enjoyed the dark tone of the original, it is not emulated in this 3D remake at all. 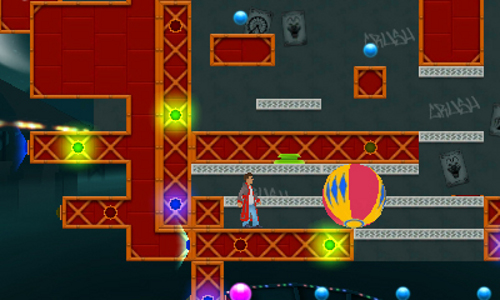 The presentation itself is a rather nice alternative to the original with a new colour scheme including light shades and a lot of primary colours. The music also fits and has a couple of catchy tunes in it. But I was disappointed in it’s use of the 3D. This is my one major complaint in the game. As the game is a remake with the same old levels, the big gimmick is the idea of 3D in a dimension based game. However I could not tell if the 3D was actually on most times. Sometimes I would even switch it off and on and see no difference. This isn’t outright bad but because the main selling point of this game is the 3D, and the 3D to 2D gameplay, I thought that was worth bringing up as many people may have brought the game just for that aspect. Even though 3D doesn’t change most 3DS games at all I at least thought that this one would change my opinion and convince me of it’s potential. Unfortunately I was right and it does not add anything to the visuals in any way.

In conclusion Crush 3D is a solid game with good controls. The premise is clever and the puzzles have some genuinely ingenuous moments which make for a great romp. But I have to advise you that apart from the story and tone, this is the exact same game as Crush for the PSP, a game which is by far cheaper. If you aren’t sure of the game then I would advise you to get that version, unless you really want an excuse to get out your 3DS.

Overall with it’s interesting main gameplay gimmick and clever puzzles, Crush 3D gets an A-