The classic Genesis platformer Strider takes place in a dystopian, futuristic Kazakhstan. Having said that, I have just told you what is probably the least absurd thing about the game.

A little while back, Nintendo and Sega re-released this game onto the Wii’s virtual console service. We Addicts missed it, probably due to banana related reasons. Hit the jump so that I may tell you why Strider’s Kazakh setting is the least of the games oddities or its problems.

Released for the Genesis in 1989, Strider is a port of the classic arcade hit of the same name and another example of the philosophy Sega held throughout their years as a platform holder: The arcade experience at home. In this respect, the Genesis version of Strider was proof that Sega’s hardware could do just that. With only a minor degradation in the audio and visual departments, Strider for the Genesis very much resembles its arcade brother.  To impart to you how impressive this was, consider for a moment that the CPS-1 hardware that Strider was native to was home to such games as The King of Dragons, Megaman Power Battles, and Sega Addict’s beloved Mercs. The CPS-1 was no Neo Geo, but it was advanced enough that squeezing one of its games down to the Genesis with so little compromise was pretty amazing!

Unfortunately, rose tinted glasses and an obsessive compulsive sense of arcade nostalgia can only take you so far. 23 years later, Strider is a bit of a mess that will appeal to gaming veterans and retro heads but is sure to alienate everyone else. 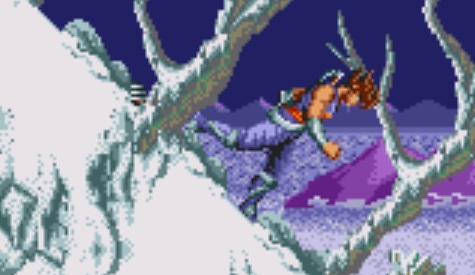 The origin of Sonic the Hedgehog 4 Episode 1's physics engine?

The graphics and sound, while so close to the arcade original, have aged horribly. Strider just looks…well, boring. The backgrounds are static and often solid black. All moving sprites and tiles appear to be on the same ‘level’, making the game seem very flat. Compared to Ghouls n’ Ghosts (released for the Genesis that same year), Strider is visually clunky and outdated. No parallax scrolling, no vibrant backgrounds, a minimum of frames of animation, even for the main character…Strider looks like all of the effort was put into making the game work ON the Genesis instead of making the game work FOR the Genesis.

In developing Strider, Capcom strayed from many of the design philosophies that have helped so many of their games from the 8 bit and 16 bit era stay relevant. Typically, the Capcom games of the 80’s and 90’s all shared similar conventions such as a graduated difficulty curve, teaching players how to play via level design, and an emphasis on bite sized chunks of gameplay.

Strider features none of this. You are instantly thrown into the action of a Kazakh rooftop where everything in the entire world wants to kill you. The controls are complicated enough to not be intuitive and very little effort was made in the art department to make it clear where you can go or what elements on the screen you can interact with. Or even how to interact with them.

Now the obvious defense to be made here is “Well, it is a port of an arcade game. It is designed to steal your quarters”. Well, I will have no truck with such an excuse. By the time Strider was developed for the Sega Genesis, my of Capcom’s arcade offerings had already been revised for consumption at home. Games like the 1940 series, Commando, and Bionic Commando had already been ported by the company and were not hampered by their arcade origins. Those games have maintained their viability as the years have gone by whereas someone who had never played Strider might be inclined to want their 800 Nintendo points back after only a few frustrating minutes with Strider.

So with boring visuals, clunky gameplay, and audio not worth mentioning, what does Strider have to recommend it? I believe the term is ‘Moxy’. Just as much as Strider is an example of the annoying parts of 80’s arcade design philosophy, Strider is also a shining beacon of the ‘anything goes, we will make whatever kind of game we freaking want’ mentality that defined the gaming industry while it was still niche. Early in the game, you encounter the entire elected Kazakh Soviet. They jump from their seats to turn into a robotic communist war serpent, right there in front of you. One second you are fighting a guy who looks suspiciously like Hulk Hogan and the next it is Strider vs a robotic tank gorilla. Strider could stand by itself as testimony to how mundane and derivative gaming today is. If only it was more fun, that is. 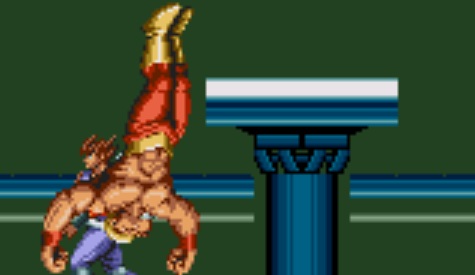 Okay, I take it back! Suburban Commando was a great movie!

In order to like Strider today, you need to have already liked it yesterday. It is not a game that I would recommend to anyone who has not already experienced it. The one caveat I have for that statement is that if you are looking for a zany game where nothing makes sense (perhaps to augment a drinking game with friends), Strider is there for you. For everyone else, I think there are better places to spend your virtual Nintendo monies.

Strider is a game that has aged poorly and might even be beyond nostalgia’s ability to salvage.