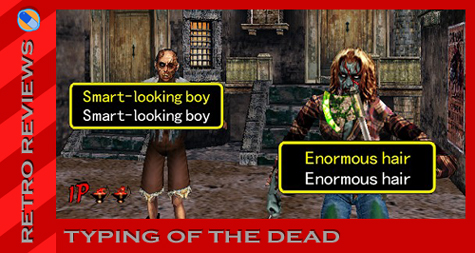 With House of the Dead 3 and 4 releasing on the PlayStation Network, I felt the need to relive one of the overlooked chapters of Sega’s zombie family: The Typing of the Dead. The Typing of the Dead is one of the more unique games in existence, and perhaps one of the most daring. After playing it, you will learn that next to a shotgun or katana, a keyboard is your most vital weapon against the inevitable zombie apocalypse. Join me on this retro adventure and learn how someday your typing skills will save the lives of your loved ones. Provided you also have a Dreamcast strapped to your back.

Originally Released For: Arcade (Japan only)

Reviewer Perspective: Devout Believer – Has played the game back and forth and still gets excited when introducing it to new people.

The Typing of Dead released at an interesting time in Sega’s life on Janurary 23rd – one week before Sega announced they were going to discontinue the Dreamcast by March of 2001.  Keeping this in mind, it is not entirely surprising that Sega tried something totally different with their light gun zombie shooter by putting a keyboard in your hands instead of a gun. The result was a game that took itself even less serious than its predecessor and in turn provided a campy adventure that was fun and arguably educational at the same time.

Any fan of the House of the Dead series will tell you how enjoyable the B-Movie voice acting of the series can be. Add to this the most random sentences and phrases and the result is an adventure even more laughable than before. Phrases such as, “Pencil lead is poisonous,” and, “Let me shave your legs,” will litter the screen and ironically make the game more difficult as you are trying not to laugh uncontrollably while attempting to save the lives of civilians. The quick, small enemies are killed by individual keystrokes while bosses sometimes are composed of entire essays. One particular boss actually asks you questions and requires you to type the correct answer to apply damage.

Along with the Arcade Mode and Original Mode, TOTD also includes a Drill Mode to help improve your typing skills in the area of speed, accuracy, and the use of special keys. As with most shooters, there is also a Boss Mode, which allows you to play through the bosses of the game. I found Boss Mode to be the most entertaining with a letter from summer camp being one of the typing topics during a battle. Through out the Original Mode, players obtain coins, which unlock additional continues, item bonuses, and even a Free Play mode.

The only downside of purchasing TOTD for Dreamcast is the requirement of also purchasing a Dreamcast keyboard, however they can be found relatively cheap on the internet marketplace along with the game itself. Keep in mind that TOTD is worlds more entertaining with a second person and a second keyboard will definitely be worth the investment. Even though TOTD is only a 2-player game, it can quickly be turned into a party game by having friends volunteer to yell the words and phrases for the less keyboard-savvy zombie slayers. When introducing this game to 3 of my friends, we took turns as the “yelling coaches” and found the game to be even more entertaining as someone would yell, “Nice kilt you’re wearing!” for the sake of saving humanity.

With the recent announcement of Sega acquiring a trademark for, “Flick of the Dead,” I can only hope that this means a smartphone version of Typing of the Dead will soon be released.

The Typing of the Dead is a rare and awkward attempt at a game genre that needed comic relief without even knowing it. When I introduced my friends to this game I left the room briefly and came back to one of them saying, “Scott, I think I speak for the room when I say that this is easily the best game ever.” Guns may have worked in the past against the undead, and they may work now, but when it comes down to the end of the world I will reach for my keyboard first. 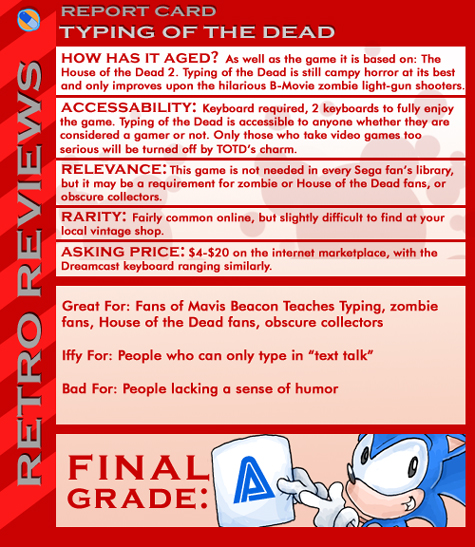 Dean’s Face Acting is back, features a lot of Blue Stinger!