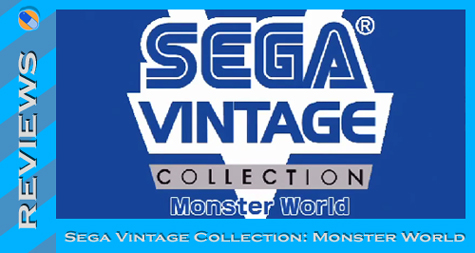 Sega is well known for frequently making use of its extensive range of popular series and characters. This being said, the Wonder Boy character/series and sort-of spin-off Monster World series haven’t seen any action since the Japan only release of Monster World IV in 1994, despite the relative success met at the time of each game’s release. Newcomers to the series will no doubt find the double-barrelled series difficult to penetrate due to multiple games and confusing titles; not to mention the ‘Nintendo adaptation’ series Adventure Island which ran parallel to Wonder Boy.

Sega and developer M2 attempt to change all this with the release of the Sega Vintage Collection: Monster World, which bundles three Monster World titles into one downloadable XBLA release, along with numerous extras. Hit the jump to find out what I think not only of the three games separately, which I will be playing all of for the first time, but of the collection as a whole. 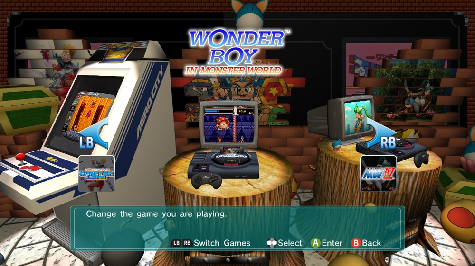 Sega have used the presentation of the game menus and the customisation options as a selling point for all of their Vintage Collections, and quite rightly. Upon running the collection from the Xbox dashboard I was treated to a short but sweet animation featuring cute cartoons of the three games’ main characters whizzing about as well as a burst of retro-game inspired music followed by the spine-tingling Sega jingle. This light hearted, Japanesey intro instantly put me in the right mood for some retro action and left me charmed in a way that many of the Backbone emulation offerings had not.

Pressing Start goes into the game’s main menu where each game is represented by a monitor hooked up to a Mega Drive, or in Wonder Boy in Monster Land‘s case, an arcade cabinet. From here a game can be selected, bringing up a sub-menu and playing remixed version of a song from the selected game. I must also point out that in my version of the collection, the consoles are indeed European Mega Drives which leads me to believe that either I downloaded a ‘regional’ version of the collection, or that it detected my location and changed the consoles appropriately. Either way this little touch speaks volumes about the effort Sega and M2 have put into the collection’s presentation.

Speaking of menus and options, all controls are fully customisable via a simple chart, along with the option for rapid fire, which is greatly appreciated as I play my retro games with a combination of a MadCatz fightpad and Hori arcade stick. Screen settings allow the games to be played at 4:3, 16:9, stretched, smoothed and with scan-lines. Each game also has it’s own selection of backgrounds that can be displayed while playing, or can be turned off completely, which I always prefer. All of these options can be altered in-game as well.

Other bonus options include a ‘jukebox’ sound test mode, the option to play all three games in their original Japanese forms, and replay saving for the main games as well as the trials in the Trial Mode; a mode where certain conditions must be met within a specified time e.g. collecting 1000 coins or completing a boss run. Personally I would have preferred access to artwork and the original game manuals over some of these extras, but the non-essential options on offer still give worth to what would otherwise be a small collection of ROMs, and show that Sega are offering a complete ‘package’ rather than swindling us of out precious Microsoft points. 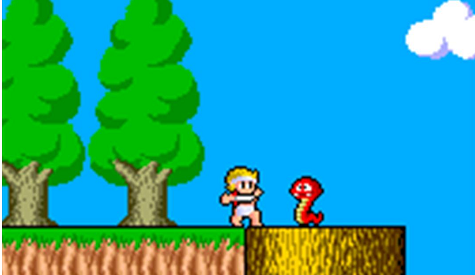 Becoming bored of riding skateboards and eating vast amounts of tropical fruit, this sequel to 1986’s Wonder Boy sees the titular character pick up a sword and shield in an attempt to rid the land of the very same monsters the land is named after. While being a linear platformer at heart, Wonder Boy in Monster Land‘s main attraction is the incorporation of very basic RPG elements. Slain enemies drop coins that can be used to purchase upgraded weapons, shields, armour and magic spells needed to both defend against and kill enemies, as well as boots that will aide in the numerous, tricky platforming sections. However, the game’s time limit ensures that only enough money can be harvested to purchase one or two items per stage, meaning decisions must be made. Most arcade games guzzle players’ hard earned cash through punishing difficultly levels, but Wonder Boy in Monster Land‘s approach is to have players replay the game and purchase the items they have learnt will be needed to the next section. I found such an approach refreshing, rather than frustrating, even 25 years after the game’s original release.

For a 25 year old game it has aged rather well graphically. The varying environments are rich and vibrant with colour, and the enemies found within are just as varied and have surprisingly detailed sprites with bold black outlines giving the entire game a charming cartoonish look. Sound-wise, the game doesn’t fair quite so well, with many of the common sounds such as the jabbing of the sword and the eruption of gold from a dead enemy being particularly grating. The music isn’t as annoying, but just doesn’t sound very nice and simply isn’t catchy enough to compensate. Particular sounds caused a little buzzing from my speakers, which work wonders with my various retro consoles, so I suspect there may be an issue with sound emulation at play.

Wonder Boy in Monster Land is a fairly standard platformer with an RPG twist that cleverly warrants multiple play throughs. It’s bold visuals help distinguish it from other games of its time, but unfortunately do not excel the game into being anything but average. 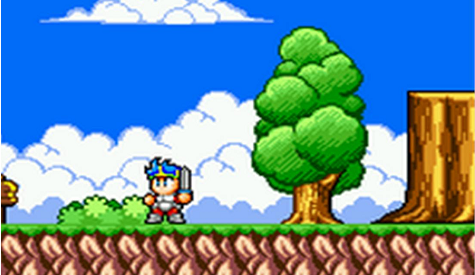 In a nutshell, Wonder Boy in Monster World is Wonder Boy in Monster Land adapted for the home console. Gone are the time limits, high scores, linear levels and tough purchasing decisions; the game even features a built-in save so there’s plenty of time to stop and continue your journey at a later date. Unfortunately, this does not work in the game’s favour and results in a slow, tedious and unchallenging experience. Dim-witted enemies slowly walk into your sword as you grind for coins, at least I say grind, however the large amount of money dropped by enemies ensures that at any point in the game you can amass enough money to buy all of the best equipment within fifteen minutes. Having the best armour is a necessity as a lot of time will be spent walking through enemies as it’s quicker than killing them as new hero Shion slowly wanders aimlessly, back-and-forth through Monster World trying to figure out what to do. The game has a nasty habit of not quite making it clear enough as to where you have to go, or whom you have to speak to in order to progress. Adding insult to injury, dungeons, which one would expect to be the real ‘meat’ of the game, can also be over and done with in approximately fifteen minutes, each with a pathetic bosses requiring nothing but the pattern-recognition of a tipsy snail.

This is all a crying shame because Wonder Boy in Monster World looks absolutely stunning for a Mega Drive game of 1991. The cartoonish visual theme from Wonder Boy in Monster Land returns better than ever with large, beautifully crafted sprites and luscious, brightly coloured areas including dense forests, vast deserts and a tropical area clearly paying homage to the original Wonder Boy. The aesthetics of this game would give any would give any 16-bit Nintendo title a run for its money, and I found myself pushing really hard to get through the game just to see more, but unfortunately it just isn’t fun enough. 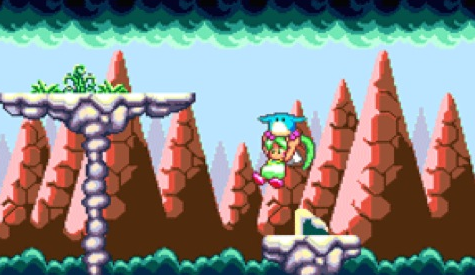 So now we move on to the real curiosity piece of the Sega Vintage Collection: Monster World and potentially a deal-breaker for many, the newly translated, formerly Japan-only, Monster World IV. Playing the three games in order, Monster World IV game redeemed the Monster World series in my eyes and dealt with almost all of the issues found in its predecessor. The main character, now a young girl by the name of Asha, can run and jump with the speed and fluidity of an acrobat and can attack in air in numerous directions. Asha’s side-kick, a friendly, floating blue monster named Pepe, can be held onto in order to glide and double jump. These new moves reflect the increased, and welcomed, focus on platforming the series so desperately needed. Inter-dungeon areas have been removed in favour of a single town acting as a hub-world from which each of the much longer dungeons are accessed.

No game is perfect, and Monster World IV has two glaringly obvious flaws that almost over-shadow what is, on the whole, a fantastic Mega Drive game. The first is that save points, which also act as check points, are far too scarce. For example the first dungeon, The Silent Tower, has one save point at the very beginning that you return to every time you die, with all items and coins collected being lost. Being the first dungeon and there having been no chance to gain additional power-ups before, dying is a frustrating inevitability which led me to resort to using save states. The second, unforgivable issue is that there are points in the game where you must carry out a certain act to proceed, except what you are require to do is not logical and isn’t mentioned or even hinted at all by the game, nor by its NPCs. The prime example of this is the necessary acquisition of the aforementioned Pepe where, upon receiving his egg in an unmarked treasure chest, the egg must be selected in the menu while standing in front of a shrine in order for him to hatch. There is no mention of eggs or the shrine anywhere in the game, which requires an online FAQ for guidance. This happens infrequently, but once is far too many times.

Negatives aside, the game builds on the lush visuals of its predecessors, with even more greatly detailed sprites and beautiful backgrounds, making good use of parallax scrolling. Distinguishing itself from previous titles in the series, the game drops the medieval theme, opting for an enchanting Arabian theme, which is complimented by the most well-written and catchy music found in the three games. It’s easy to criticise a game, but the positives grossly out-weigh the negatives, and this game stands out as the crown jewel in the collection. In retrospect, if given the opportunity to purchase this game, and this game alone, as is possible on the Nintendo Virtual Console and the PSN, I would definitely have done so.

Conclusion: M2 and Sega have outdone themselves in offering a well presented collection of games from a series fading into obscurity. The vast amount of customisation outdoes anything I’ve seen included with any previously released Sega collection or compilation of emulated games and should stand as a shining example of emulation done right. This being said, my recommendation to anyone contemplating buying this collection would be to simply get Monster World IV alone on the PSN if possible as, from what I gather, it has all of the same options and extras as the XBLA version. Unfortunately, the mediocre Wonder Boy in Monster Land and the just plain boring Wonder Boy in Monster World drag the collection way down, with only the very enjoyable and charming Monster World IV preventing it from being a complete and utter waste of Microsoft points.