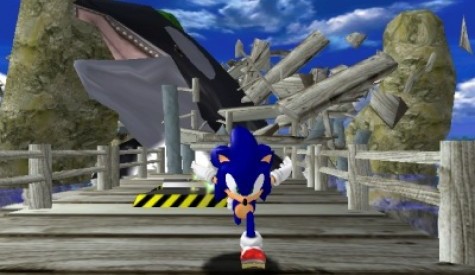 I have no shame admitting that I still love a good 60% of the first Sonic Adventure. Yeah, yeah, it’s glitchy as hell, and the extra characters are mostly fluff, but dammit, Sonic’s first full foray into 3D platforming was fun and had some really epic moments. And Knuckles’ stages weren’t that bad. You shut up.

People like me are still looking for any reason–ANY. REASON.– to believe that somehow, someday, a third chapter in the open-world, admittedly uneven and polarizing Sonic Adventure series could hit consoles (and don’t you dare say Sonic Adventure 3 was Sonic 2006, cause I will feed you your own blaspheming tongue).

As sketchy as this unknown purchaser is, I want to believe this news with all my heart. I think bringing back a more streamlined Sonic Adventure title could be a great way to bring the newly honed gameplay of Sonic Generations’ Modern Sonic to some entirely new, epic stage designs. Like Sonic Generations, it would also play to nostalgic fans who have followed the series from the Dreamcast days, while still offering something new to modern players.

Anyone agree with me? Or should Sonic Adventure be forgotten ASAP?

The Dream(pod)cast Episode 2: Sonic vs. A Wet Dude