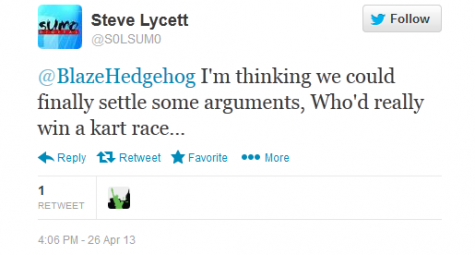 Late last month, Sumo Digital Executive Producer Steve Lycett tantalized us all with a Twitter conversation regarding the future of Sonic & Sega All-Stars Racing. Now that Nintendo and Sega are all buddy-buddy, one of Lycett’s more interesting tweets has taken on a whole new level of intrigue.

When @BlazeHedgehog asked about the potential for a Pac-Man crossover, Lycett went on to clarify that he was thinking of “bigger rivals.”

Of course most of us are going to leap to the conclusion that Lycett would like to see a crossover with Mario Kart. Considering that Nintendo’s long-running franchise has needed a shot in the arm for years now, and since the fantastic Sonic & All-Stars Racing Transformed didn’t sell anywhere near as well as it deserved to, combining both games’ audience makes a lot of sense. Besides, Sumo did a great job of referencing just about every major moment in Sega’s console legacy, so why not make a game based on one of the greatest rivalries in the history of the medium?