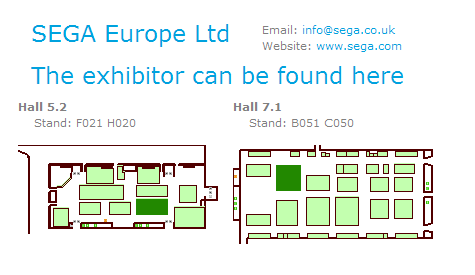 Yours truly was searching through the official list of 600 exhibitors to see who will and won’t be turning up at Gamescom next week. Being the Sega worshipper I am I couldn’t help but search the company up, you know, just in case. To my surprise the official Gamescom website lists Sega as having two booths, one in the business-only hall 5 and one in hall 7 which is an ‘entertainment area’ accessible by the general public. You can view the huge hall plan here.

This is peculiar considering Sega announced at first that they would not turn up, then later changing their minds and stating they would be conducting an exhibition ‘behind closed doors‘. Now, according to the Gamescom website, it looks as though average Joes like myself will be able to take a peek at Sega’s hottest new properties. Hooray!