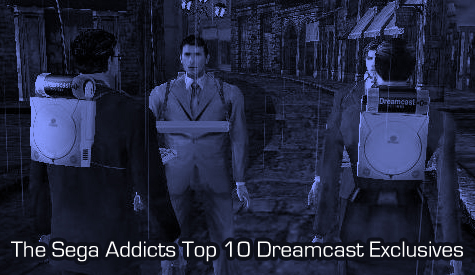 The Dreamcast is known for its amazing and unique library but as time goes on many of the games that make the system so popular have appeared on other consoles as a port or HD re-release. However, even with all these new ports and re-releases there’s still quite a few great games that remain Dreamcast exclusives and will likely remain that way.

Hit the jump to read about our top 10 Dreamcast exclusives! 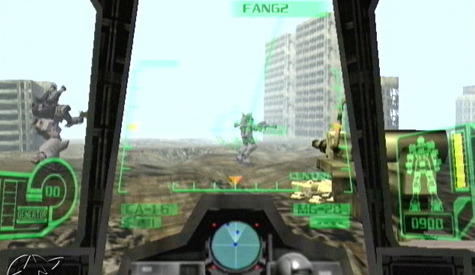 Flake: I am not really sure how Gundam games get produced. They kind of get thrown together randomly on whatever game console the developers feel like playing with this week. So when you play a Gundam game for the first time, you really never know what you’re going to get. There is not a lot of consistency. A huge exception to this is the Gundam Side Story series, a Sega exclusive that started on the Saturn with three incredible first person robot sims. The Dreamcast saw the final title in the series and it was the realization of the Gundam game that fans had always wanted.

Ironically, Gundam Side Story 0079 does not even have you in a Gundam. You play the role of a grunt mobile suit team leader, fighting the forces of Zeon with whatever random machines and equipment the ace pilots have not taken for themselves. This adds tension to the game and gives you a reason to experiment with different mechs and load outs instead of just taking the eponymous RX-78 Gundam. There will never be a more in-depth Gundam experience than 0079 Side Story and it was only ever released on the ‘Cast. 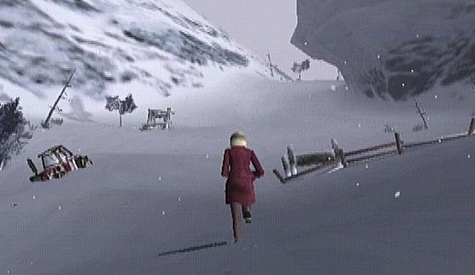 Mike Kyzivat: Let me see here. What can I say about D2 that hasn’t already been said in another Sega Addicts Top 10? Hmmm… old men with plant stalks coming out of their junk? No, already talked about that. An old woman playing a violin with bird wings on her back and eagle claws coming out of her who-ha? No, covered that as well. Well, after that what’s left? I guess I could talk about its exclusiveness on the Dreamcast, but I think that’s self-explanatory.

You know what? Screw it, enough about D2. How have you been? Uh huh… yeah… Well, that will clear up with a little topical cream. So, how’s the job going? Really? She said that? I can’t believe Mindy sometimes. How are the Kids? Oh jeez… Well, what do you expect when you give them chocolate and coffee right before bed? How are the in-laws? yeah… right… oh man… Hey, watch your language this is a public website and… whoa, whoa, whoa, ok buddy that’s enough. I think we’ve heard enough about you. Maybe it would be better to talk about D2.

So anyway, D2 is a game where you… oh look at that I’m out of room. 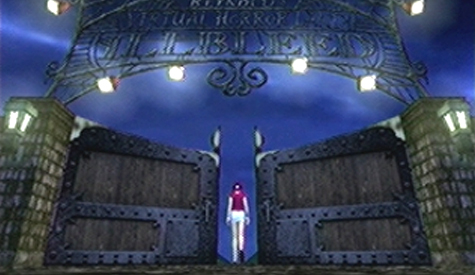 Tom Kyzivat: Illbleed pretty much had to be a Dreamcast exclusive, because I’m pretty sure nobody else wanted it.  Har, har!  Not that the game is bad, but it is supremely strange.  Like, really strange.  Really strange in a very Japanese way.  I’m actually surprised it made it to the U.S., but given that it follows so many campy, classically American horror story themes (with a bizarre Japanese twist) I guess it was meant to be.  I’ve always loved the game for its strangeness, creepy sense of humor and overall style, so as far as I’m concerned, the fact that nobody else got it is their loss. 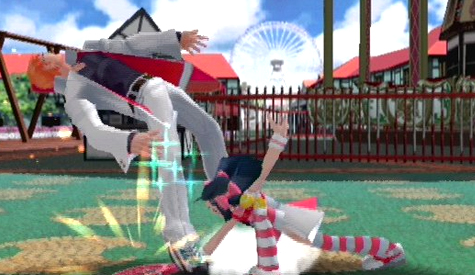 Josh Newey: Ok, I have no quarrels admitting that I am a total scrub to the fighting game scene, and as such I don’t really have any right giving any distinction to particular games. But screw it, Flake’s Retro Review is right—Project Justice’s outright criminal obscurity is one of the saddest pieces of discarded shrapnel from the Dreamcast’s unfortunate implosion. Everything about this game’s presentation and character fits in so beautifully with the console’s library, and the gameplay is so deep and finely tuned that it’s utterly disgusting that it doesn’t get to sit nestled in with the Dreamcast’s finest, most beloved must-play titles. Even players like me—complete noobs who can’t comprehend the first thing about poking or hit boxes—will have a hard time frowning during PJ’s visually dazzling, high-flying combat. Throw in a campaign that’s deeper and more replayable than almost any other fighter from the era, and you’ve got a game worth every single penny of its hefty asking price. I will never understand Capcom’s decision to drop the Rival Schools franchise, as Project Justice still stands out as something incredible, even amongst today’s popular riffraff. 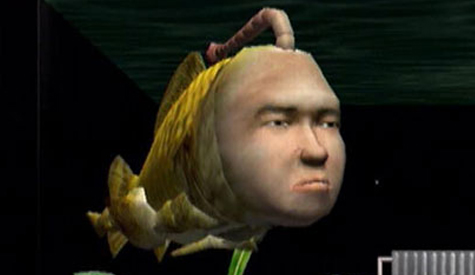 Tom Kyzivat: Now, depending on the order of this countdown, chances are I already talked about Illbleed, and I mentioned how strange it is.  Well, Seaman is about as weird as 25,000 Illbleeds/sec., which I believe was known as Einstein’s Formula of Digital Chicanery.  We all know the story–Leonard Nemoy introduces us to tadpoles with human faces, who grow into fish with human faces, and eventually frogs with human faces.  And the whole time, they speak to you and call you a fart face, or an insult equivalent.  So, there you have it.  Weird.  It’s a shame that so many other non-Dreamcast console owners will never know the horrific joy that is Seaman.  I wonder what they see every time they close their eyes? 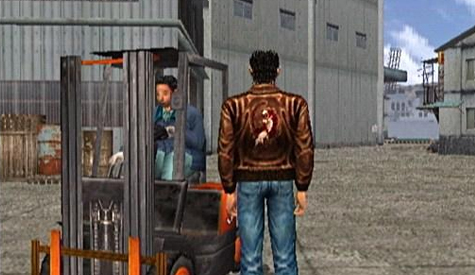 Scott Morrison: Shenmue was that one game that drew me in not because I thought I would enjoy it, but because I thought I should experience it as a gamer. Having a lot more free time in the year 2000 than I do now, I picked up Shenmue out of pure curiosity, and do not regret it. Somehow, Shenmue made the most mundane things entertaining. Things like buying Ramen at a corner store, looking at little toys bought from quarter-machines, taking care stray cat. Shenmue was the most realistic game for its time and gaming in general owes a lot to it for the many standards its set. Quick-time-events, or back then called “Full Reactive Eye Entertainment”- or FREE, have become a staple in some games series after Shenmue introduced them. In-game cinematics have also come a long way after Shenmue. The most noticeable thing about Shenmue that has evolved over the years is the ability to experience a living, breathing world within a video game. Some would say that no other game has captured this as brilliantly as Shenmue while others would argue Shenmue did it the most sloppily, but someone had to initiate the atmosphere. Either way, Shenmue broke new ground with its gameplay, atmosphere, and characters. Games like the Yakuza series, and even Grand Theft Auto owe Shenmue something for where they are today. Anyone who has the time to spend with Shenmue and has not done so owes it to themselves for the experience. Sometimes I wonder if things would have been any different for Sega or video games in general if this game released on the Sega Saturn like originally intended. Speaking of the Saturn, I need to stop by the corner store and see if they have any new games. I’m sure my father’s murderer’s will still be around after I play a few rounds of Space Harrier. 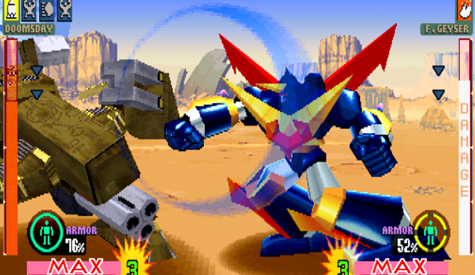 Flake: I love robots and the bigger the better. Tech Romancer is a game where the concept makes up for any short comings in the execution. Essentially it is an arcade fighter but the controls are kind of sticky, the button inputs unintuitive, and the gameplay is a bit slow. Nobody cares because each character is the pilot of a different type of mech and the game is essentially 14 different japanese cartoon robot plots crammed into a single game.

Every genre of mech show is given a nod: Super robots, military sci-fi, steam punk…it’s all there. A mecha fan can expect a solid
chunk of their life to vanish as they play through the plotline multiple times with each type of robot. Even better: The robot designs were done by the same company responsible for Gundam 0083 Stardust Memory and one of the later Macross shows! 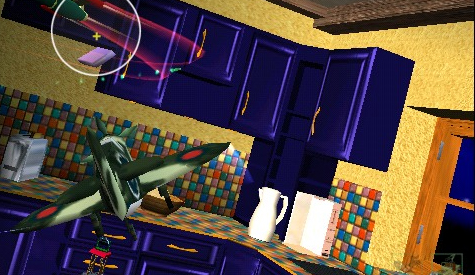 Alex Riggen: Toy Commander is proof that having a unique and endearing setting for a game is just as important as the gameplay. With a different coat of paint Toy Commander could be a typical action war game but the choice to make it all based on toys makes the game standout. Instead of big mechanical tanks, planes and other vehicles you’ve got tiny remote control toy vehicles duking it out in giant living rooms, kitchens and bedrooms surrounded by every day items like cleaners and dishware. Every kid has used their imagination to recreate serious wars in their own homes and to finally relieve that experience in a video game is what makes Toy Commander such a great game. 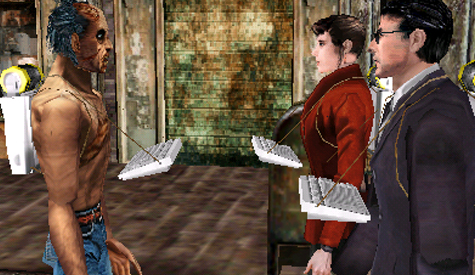 Scott Morrison: Typing of the Dead. If that name doesn’t spark your interest, well then we just can’t be friends. Oh but I jest. If you are reading this then I assume you have played some form of the House of the Dead series either at home or in the arcade. The one game in the series that I feel most have played is House of the Dead 2. In 2000, Sega thought it would be a great idea to add a different level of fun to this game by making it “educational.” What they did resulted in one of my favorite games of all time. Simply put: replace your light gun with a keyboard and you have the wackiest way to save the world from a zombie apocalypse. Phrases like, “There was an echidna from Vegas, whose hairstyle was loud and outrageous.” will help you drastically with your typing skills, and your zombie-slaying abilities. See? It’s educational AND fun! Also worth mentioning is the fact that your characters in the game are armed with keyboards strapped to Dreamcast backpacks – standard issue from the AMS. More games today need to take a page out of Sega’s book with their own series for the sake of most games becoming too serious in my opinion. Typing of the Dead somehow always comes out when I have gamer friends over and in turn new TOTD fans are created. This game deserves so much more exposure outside of Sega circles. Having given the game a positive rating recently in a review (http://sega-addicts.com/?p=28924), I can’t recommend this Dreamcast exclusive enough to people before they “Suffer like G did.” 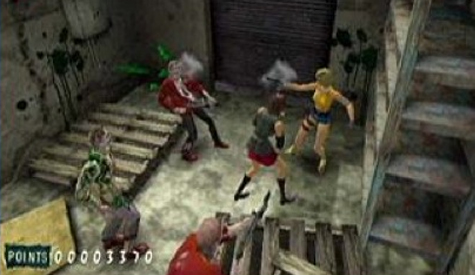 Josh Newey: After years of dreaming about it, Zombie Revenge finally gave me what I wanted—a ridiculous, zombie-based beat-em-up that didn’t give a damn about anything but brain-dead, repetitive, mirthful slaughter. Games like Deadly Premonition and House of the Dead get all the credit for being the videogame equivalents of B-movie absurdity, but Zombie Revenge achieves that goal in spades, with silly, straightforward gameplay that feels like a horror version of Streets of Rage, ridiculous characters that represent the perfect cross-section of the best cliched brawlers of the 16-bit era, a barebones plot so stupid that it elicits laughter from me on a regular basis, and one of the best narrators I have ever heard anywhere ever (Honestly, I still recite his “BULLETS” line every time I pick up my keys to go to work). If you’re a House of the Dead fan, you’ll also appreciate that Zombie Revenge is sort of a spiritual spin-off of the series, with sound effects, stylistic choices, and references lifted directly from Sega’s well-loved light-gun franchise. Never has there been a game so good at being so bad at being good that it’s great. Put that on the game case.

It’s not safe to go back into the water…